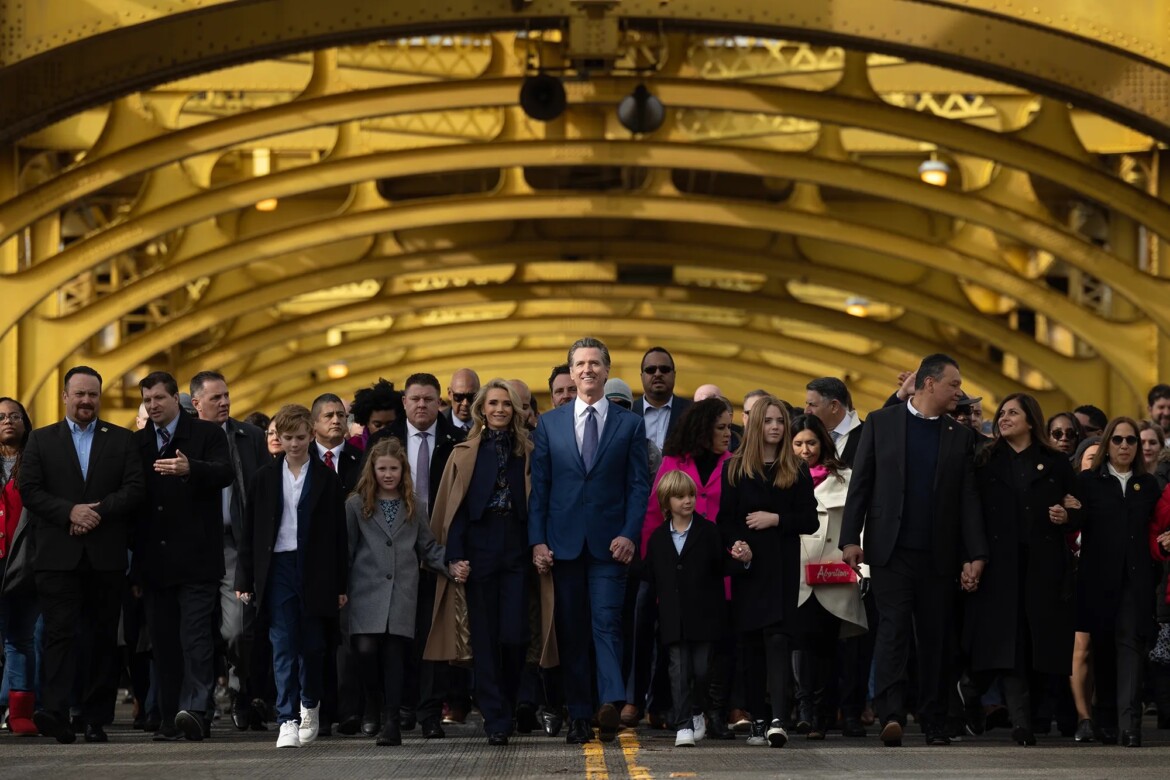 Gov. Gavin Newsom marches with a group of supporters towards the state Capitol for his second inauguration on Jan. 6, 2023. The governor's campaign touted the event as a “March for Democracy," held on the two-year anniversary of when supporters of former President Donald Trump stormed the U.S. Capitol. Photo by Miguel Gutierrez Jr., CalMatters

As the sun finally broke through after days of brutal rainstorms across Northern California, Gov. Gavin Newsom marched today across Sacramento’s Tower Bridge and toward the state Capitol with an eye on a second term that could position him as the leader of not only the state but liberal America.

Joined by his family, state legislators, union members and other supporters, Newsom aimed to draw a peaceful — if glaringly political — contrast with “the ugliness that overflowed on January 6th, 2021,” as the governor put it in his inaugural speech later, when supporters of then-President Donald Trump stormed the U.S. Capitol in an attempt to overturn the election results.

“In the pursuit of belonging and equal justice, California must be the enduring proof of concept,” Newsom said. “We must reconcile our shortcomings. Bring everyone along in our prosperity. After all, a healthy democracy must be inclusive.”

The “March for Democracy” kicked off a gubernatorial inauguration undergirded by an inherent tension: between Newsom the national partisan warrior, drawing battle lines against “red state politicians and the media empire behind them selling regression as progress, oppression as freedom,” and Newsom the state’s chief executive, who reiterated his vision from four years ago of a California for all and, in his closing remarks, made a plea for unity.

“We must all triumph together,” Newsom said.

How the governor continues to balance those competing priorities over the next four years will be a major test for his political future, especially if he plans, as many expect, to seek higher office.

His speech was short on a policy agenda for ordinary Californians, though he did nod to an ongoing clash with oil companies over gasoline prices. That battle is set to ramp up in the coming months as Newsom attempts to push a penalty for “excessive profits” through the Legislature in a special session.

Instead, the governor focused extensively on his own biography and family history, from his great, great grandfather who emigrated from Ireland to San Francisco and became a beat cop, to hot summer days from his youth rafting down the American River with his father.

A mention of the brief period, early in his first term as San Francisco mayor in 2004, when he issued same-sex marriage licenses that were illegal at the time earned a rare break of spontaneous applause in the 22-minute speech.

Newsom’s reflection on the 150-year journey “from policeman to politician” intertwined with California’s own history, both the glorious and the troubling, at times recalling the state’s great chronicler Joan Didion.

“No two California origin stories are the same,” he said. “But we share aspirations. We share ambitions.”

Newsom’s efforts to position himself as not just a fighter for California but a true representative of its people sat in strange contrast to his fierce political instincts. Much of his remarks were devoted to excoriating unnamed “small men in big offices” who have tried to restrict freedoms rather than expand them.

With mentions of “Don’t Say Gay,” banning books and “demonizing Mickey Mouse,” it was not hard to decipher that Newsom was referring particularly to Florida Gov. Ron DeSantis. Their political fates have become increasingly intertwined over the past year as DeSantis has emerged as a leading Republican presidential contender and become a favorite target of Newsom’s in speeches and interviews.

As Newsom was sworn in today by California Supreme Court Chief Justice Patricia Guerrero, a lone protester even stood up in the crowd with a “Ron DeSantis For President 2024” sign and began shouting about alleged side effects of the COVID-19 vaccine. He was quickly drowned out by cheers for the governor and escorted out by security.

Newsom slammed a Republican ideology that he said promotes “grievance and victimhood in an attempt to erase so much of the progress you and I have witnessed in our lifetimes,” and warned that there could be no compromise with their opposing vision for the nation.

“The battle lines, they’re drawn,” he said. “It is time for choosing.”

In an ironic twist, Newsom’s march down Capitol Mall — billed as an “observance of the California spirit of opportunity and inclusion” — also largely happened out of the public eye. After a brief photo stop with no questions taken, journalists were shuffled out of the way for the ticketed marchers to continue their route.

Jordyn Foley, 23, who drove up from Brentwood in the San Francisco Bay Area with her mother and a family friend, embraced the symbolism of the march as a chance to “rewrite the history of the day.”

“Our democracy felt violated,” she said of the Jan. 6 attack on the Capitol. “It turned into an anarchy of hate.”

Her mother, Deena Foley, 48, a theater teacher and nonprofit worker, said their family has supported Newsom since he was mayor of San Francisco, because of his focus on helping people and his willingness to speak his mind and not bow down to critics. She and her daughter cited Newsom’s pandemic leadership, his embrace of the LGBT community and his push to solidify abortion rights in California as highlights of his first term.

“After the Republicans terrorized us for so long, it’s nice to come up here and celebrate with the Democrats,” Deena Foley said.