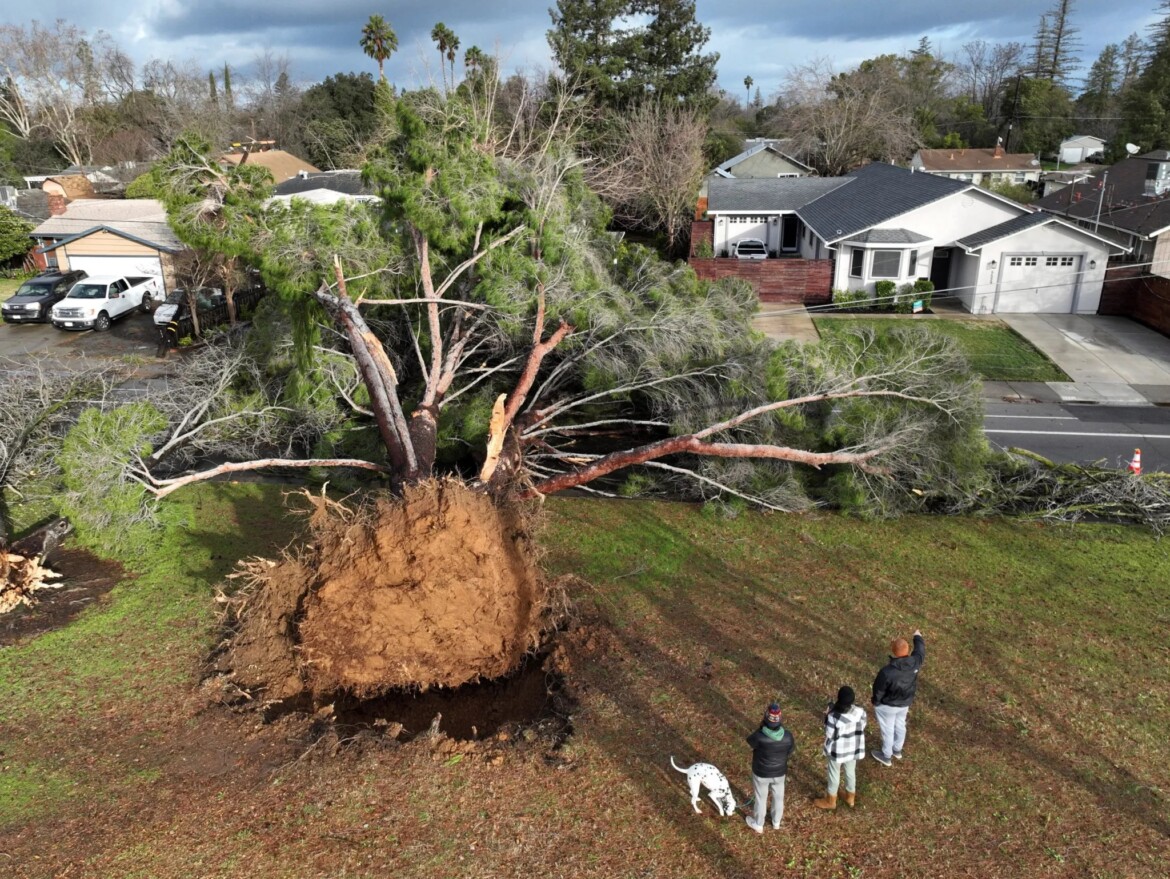 A drone view of residents looking a tree that fell during a winter storm with high winds in Sacramento on Jan. 8, 2023. Photo by Fred Greaves, Reuters

In the last 10 days, 12 people have died in California storms and flooding — more than the number of civilians who died in wildfires in the last two years.

With that remarkable and sobering fact, Gov. Gavin Newsom announced Sunday that he will include an additional $202 million for levees and other flood protection in the proposed state budget he plans to unveil Tuesday. That would be on top of more than $700 million in flood infrastructure California has invested in since 2019, according to Wade Crowfoot, secretary of the state’s Natural Resources Agency. The federal government has also put in $2.4 billion since then, he said.

Newsom also said he’s seeking a federal emergency declaration to get “the full support of the federal government in our efforts, which we have all the confidence that we’ll receive based upon the conversations with the White House.” The Biden administration announced this morning that President Biden approved the request. The federal designation is in addition to the statewide declaration by the governor last Wednesday.

Newsom’s declarations followed another in a series of strong “atmospheric river” wind and rain storms that ripped through the Sacramento region late Saturday and early Sunday, leaving swaths of downed trees (including near the state Capitol) and widespread power outages in its wake and increasing the threat of catastrophic flooding.

As of Sunday afternoon, 20,000 people had been evacuated and more than 400,000 customers, were still without power, said Nancy Ward, the just-appointed director of the Governor’s Office of Emergency Services. The weekend storm caused at least two deaths of homeless individuals whose tents were hit by trees in Sacramento.

And the storm bringing more wind and rain late Sunday into early this morning, and again tonight into Tuesday could be even worse.

UCLA climate scientist Daniel Swain warns that the next atmospheric river will be “unusually unstable” with “quite a lot of thunderstorm activity.”

That’s a scary prospect for thousands of Californians, who live along rising rivers or on the coast or in areas scarred by wildfires.