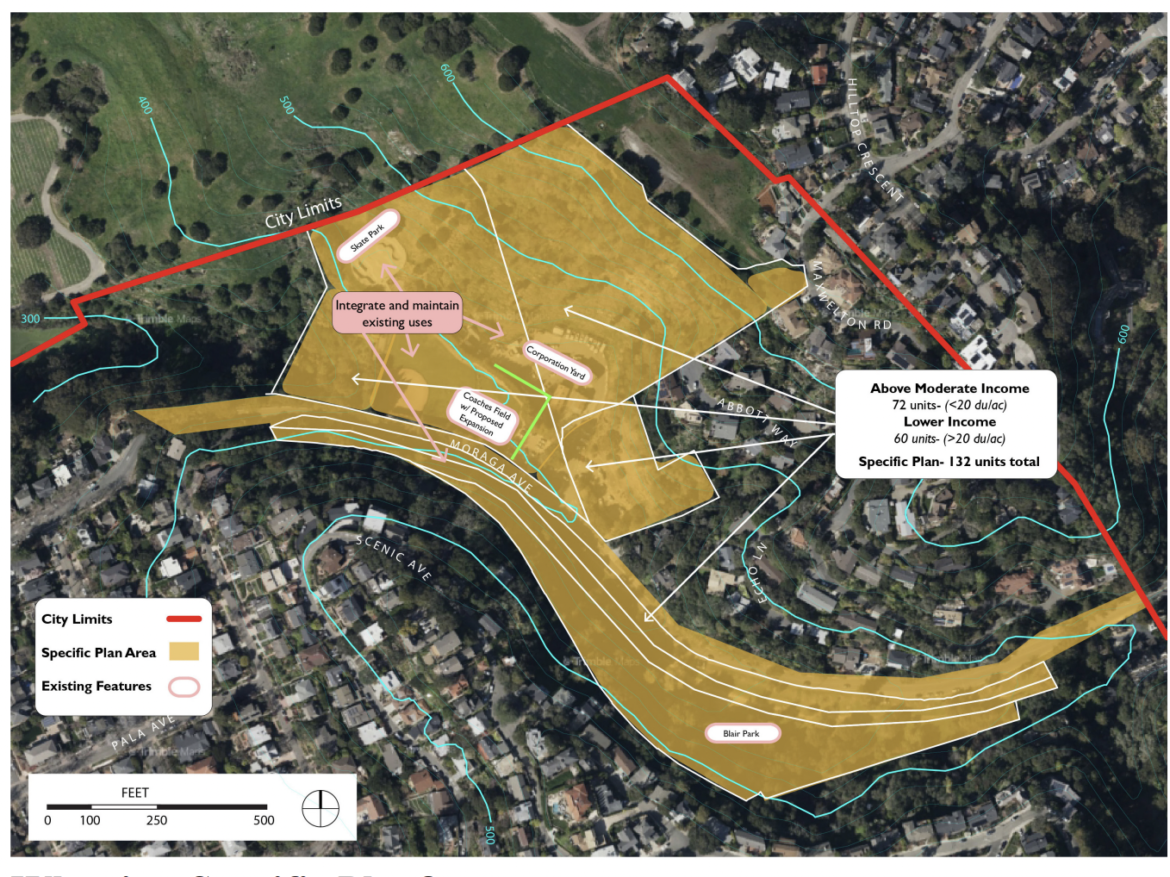 The City Council has set into motion the process to create a Moraga Canyon Specific Plan, its main purpose being to help determine the best place from among the area’s 18 acres to build housing.

The council voted 5-0 to issue a “request for proposals” from planning consultants, the goal being for one of them to help the city create a Moraga Canyon Specific Plan, through which the city would plan for housing on parts of that land on both sides of Moraga Avenue.

The council wants this specific plan in place by Spring 2025, well in time for the city to include these plans as part of its Sixth Cycle Housing Element, covering the years 2023 through 2031. The city’s Housing Element is, in part, to satisfy requirements of the Association of Bay Area Governments’ Regional Housing Needs Allocation, which calls for Piedmont to plan for accommodating 587 new residences by 2031.

The goal is for about 132 of those new residences, at all income levels, to be located in land within the Moraga Avenue plan area. The area includes Coaches Field, the city’s corporation yard, and Blair Park.

City Administrator Sara Lillevand said creating housing in this area may be the chief driver for creating a Moraga Canyon Specific Plan, but not the only one. It’s also a chance to evaluate where city amenities – notably the corp yard – could be, and what they could become.

“It’s important to get the right professional support to lead the council, and the whole city, through this process,” said Lillevand, adding that finding the right consultant is an “important first step” in the process to place housing in this area.

While two callers told the council they would favor affordable housing being prioritized in the Moraga Canyon area, Don Chandler suggested something else could potentially go in this area – the police and/or fire departments. With various activities concentrated near City Hall, the Moraga Canyon area could give emergency responders more space to operate, he suggested.

Council members said they not only want to plan properly for the housing readiness mandates required by the state, but want to do it in a way to qualify for funding streams that can help the city pay for these expensive efforts. One notable money source would be Measure A-1 funds, approved by Alameda County voters in November 2016 for issuing $580 million in property tax bonds to fund affordable local housing.

“We’re being very diligent about trying to find money to cover the costs of these unfunded mandates,” Councilwoman Conna McCarthy said.

Council members, as well as Lillevand, said outreach for public participation in this process will be crucial, and that the idea of planning for this small area may be easier for residents to get their arms around than planning for the entire city. After 18 months’ worth of public meetings centered on the larger Housing Element planning process, the city was still met with complaints from residents saying they didn’t know those public meetings were happening.

Councilwoman Jennifer Long acknowledged public outreach may extend the plan process… which for her is just fine.

“To shorten the process would be to shorten community engagement,” she said.

The council on Monday also received a progress report on the larger Draft Sixth Cycle Housing Element.  With that document’s first draft submitted to the state Housing and Community Development Department in November, Jackson said he expects the city to receive a written response from HCD by mid-February with some early comments on the city’s document and how it could be improved.

The city hopes to soon receive a “letter of substantial compliance” from HCD, acknowledging Piedmont’s progress toward a Sixth Cycle Housing Element has been substantial, thus far requiring only minor modifications as work continues.

Lillevand said the city could adopt its draft Housing Element document before the HCD sends any letter of substantial compliance, and that recommended changes or adjustments could be made later.

Also on Tuesday, the City Council directed staff to continue televising council meetings and Planning Commission meetings, and look to discontinue KCOM-TV and/or Zoom coverage of other city commission and committee meetings.

These changes are being made as the promised end of COVID-19 State of Emergency public meeting rules expire at the end of February. While council, commission and committee members will have to attend meetings in person (except under certain circumstances) starting at the end of February, there is nothing restricting meetings to be broadcast, with participants able to call in to make comments.

“We do see a benefit of more participation” thanks to televised meetings, Lillevand said.

Marcia Lane, calling in to Tuesday’s meeting from home, agreed. “If you want my generation to participate in city government, this is the only way it’s going to happen,” she said.

Lillevand added, however, that using city staff time to enable a televised meeting few or no people are watching is counterproductive.