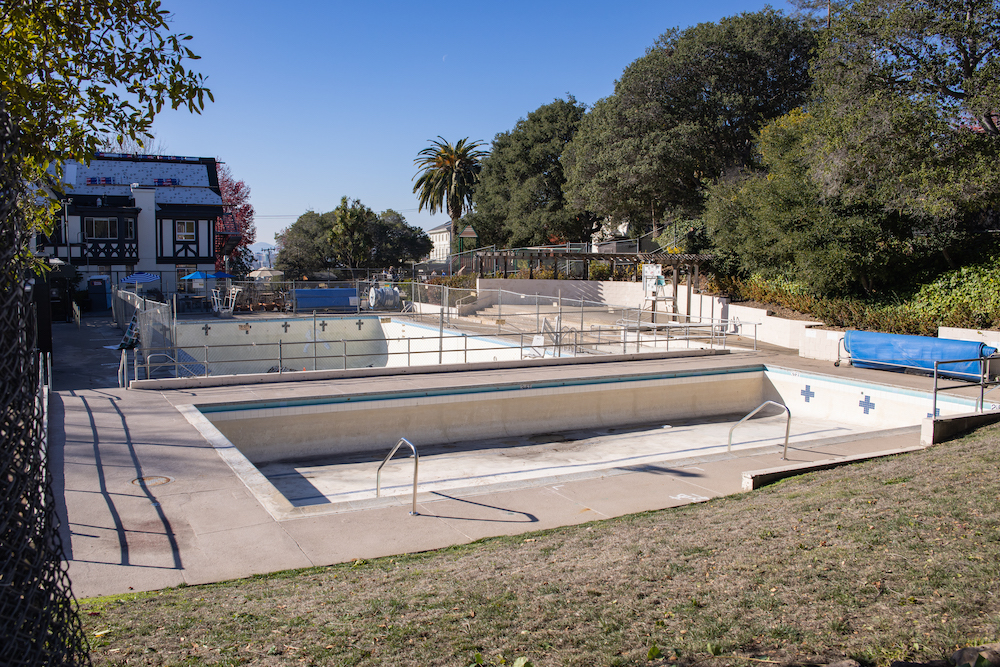 The old Piedmont pool was open for residents to take one last walk-through in December.

Some temporary changes in parking and traffic flow near the Civic Center to help accommodate swimming pool construction vehicles were approved Tuesday night, but other proposed changes were either adjusted or put on hold to receive further refining.

The council voted unanimously to approve some temporary parking changes on several streets, including Highland, Magnolia, and Hillside Avenues. But another proposed change — turning Bonita Avenue into a one-way (westbound) street between Vista and Oakland Avenues to provide room for additional parking spaces set up diagonally — was postponed, at least temporarily. That piece is expected to be on the agenda for the next council meeting Feb. 6.

Marcia Lane, a resident of that stretch of Bonita Avenue, told the council she and other residents there are concerned about such a drastic change to the traffic and parking patterns there without a formal traffic study having been done.

Councilwoman Conna McCarthy, who with Public Works Director Daniel Gonzales met with a group of residents there on Monday, urged that the Bonita Avenue changes be delayed.

“I think a more exhaustive conversation with the neighbors” about these changes is in order, McCarthy said.

Though council members were clear that they wanted to make as many temporary changes now as they could — pool construction work is formally set to begin Friday, Jan. 27 — they also acknowledged that some of the plans would likely require tweaking.

Council members acknowledged that with construction vehicles taking up so much street space while the new pool is being built in the old pool’s location off of Magnolia Avenue, there will be pain suffered by various residents, city employees, school district employees, students and others — especially given the fact the Civic Center area simply isn’t very big.

“We’re going to face throughout this that it’s going to be tricky and painful until we have a pool,” said Mayor Jen Cavenaugh, who stressed that at least parts of this plan needed to be approved before construction was to begin.

The original city staff plan called for a net loss of 12 parking spaces in the area, from 57 to 45. Taking away one traffic lane of Bonita between Vista and Oakland and making the parking there diagonal would have increased spots there from 19 to 29. Making up that number of spaces elsewhere near the Civic Center will be a significant task, Gonzales said, and could force the city to look farther away for spaces.

Any loss in parking spaces also figures to adversely affect Mulberry’s Market on Vista Avenue. Co-owner Chad Olcott told the council that too many non-customers park in his lot now, discouraging some potential shoppers from stopping.

“I will not stay in business if it gets any worse, I just can’t,” Olcott said.

Even if some plans were approved this week, council members said not all changes have to be implemented immediately. Councilwoman Jennifer Long said she’s concerned about school students, especially younger ones, not being aware of changed driving and parking patterns, and that additional time to publicize the planned changes would be a good thing.

“It seems to me that in order to be successful, we need to make more time for people to understand what the traffic changes are going to be,” Long said.

Speaking of the pool, community funding efforts are moving ahead steadily, with the Piedmont Recreational Facilities Organization (PRFO) having either in hand or promised almost $1.2 million of the $2.1 million it has pledged to raise to help pay for pool construction and amenities.

Lillevand also noted that, thanks to an anonymous donor, all donations to the Piedmont Community Pool Project starting Jan. 1 will be matched dollar for dollar, up to $500,000, over the next three months or so.

While the overall pool facility will be called the Piedmont Community Pool, the competition pool, the pavilion, the recreation/activity pool and a multipurpose room could all be named. Lillevand said several prospective $250,000 donors have expressed interest in such a naming arrangement. Specific terms of such agreements have yet to be worked out, and would have to be approved by the City Council.

The council directed city staff Tuesday night to pursue such naming agreements for $250,000 and up.

Cavenaugh said the need for smaller donations is there, too. Eric Havian, a PRFO board member, told the council his group is seeking donations of all sizes.

“I think there are a lot of people wondering, ‘Why haven’t I been asked?’’’ Havian said. He said anyone who wants to donate can go to www.prfo.org and go from there.

“The generosity of this community has been just breathtaking,” Havian said.

In a consent calendar item that wasn’t discussed at all Tuesday night, the council approved changing the official start time from 7:30 p.m. to 6 p.m. In fact, since the COVID-19 pandemic began in March 2020, most council meetings have started at 6 p.m.

“The passage of Tuesday night’s item is really just codifying what has been the practice for nearly three years,” city spokeswoman Echa Schneider said Wednesday.