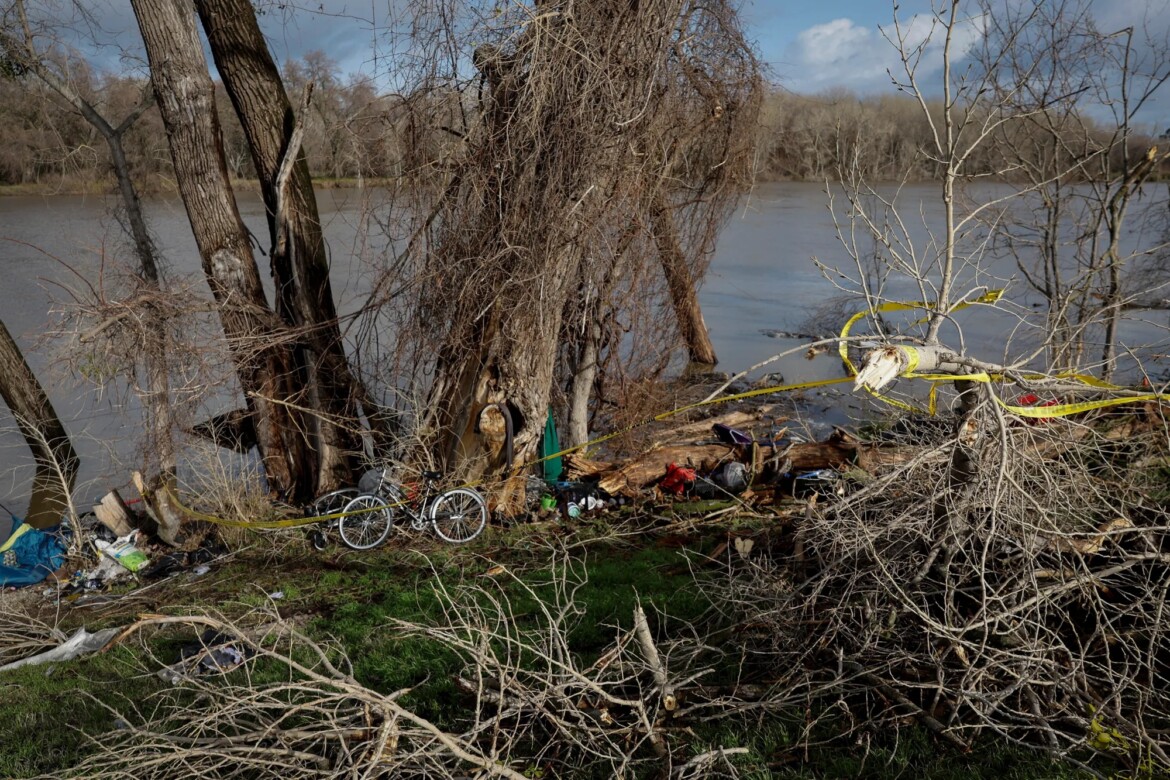 The scene where an unhoused woman was killed by a falling tree branch on the bank of the Sacramento River in Sacramento on Jan. 8, 2023. Photo by Fred Greaves, Reuters

Rebekah Rohde, 40, and Steven Sorensen, 61, are two of at least 14 people killed by the recent storms — and both were unhoused. The Sacramento County Coroner reported Monday that both were found with trees collapsed onto their tents.

The current series of storms (“parade of cyclones” is the latest National Weather Service warning) pummeled communities with as much as 8 inches of rain and wind gusts of nearly 70 mph, causing power outages, school shutdowns and flood risks, especially in coastal regions and areas burned by wildfires. They include the coastal enclave of Montecito in Santa Barbara County, where evacuations were ordered on Monday, five years to the day that mudslides killed 23 people and destroyed 130 homes.

Across the state, some of the most vulnerable include the unhoused, whose numbers have increased by at least 22,500 in the last three years to about 172,000.

Local shelters and warming centers don’t always accommodate the needs of homeless people, said Bob Erlenbusch, executive director of the Sacramento Regional Coalition to End Homelessness. People have to leave their belongings behind. Others don’t know about the centers, or don’t have a way to get there — gaps he says the city and county could do more to bridge.

In San Francisco, despite a preliminary injunction issued last September, the city is allegedly still doing sweeps of homeless encampments, including one on Jan. 4, the day of the bomb cyclone in Northern California, SFGate reports.

On Monday, the Governor’s Office of Emergency Services said it met with more than 400 community organizations in a “first-of-its-kind effort” to mobilize resources to help the homeless, those with disabilities and other “vulnerable communities.”

Meanwhile, Gov. Gavin Newsom’s request to the federal government for an emergency declaration was approved late Sunday. Newsom has proposed $202 million in his budget proposal to ramp up flood protection. He plans to unveil the rest of his proposal this morning, after which he’s scheduled to survey the state’s response to the storms. “Our message to Californians is simple: Be hyper-vigilant,” he said in a statement.