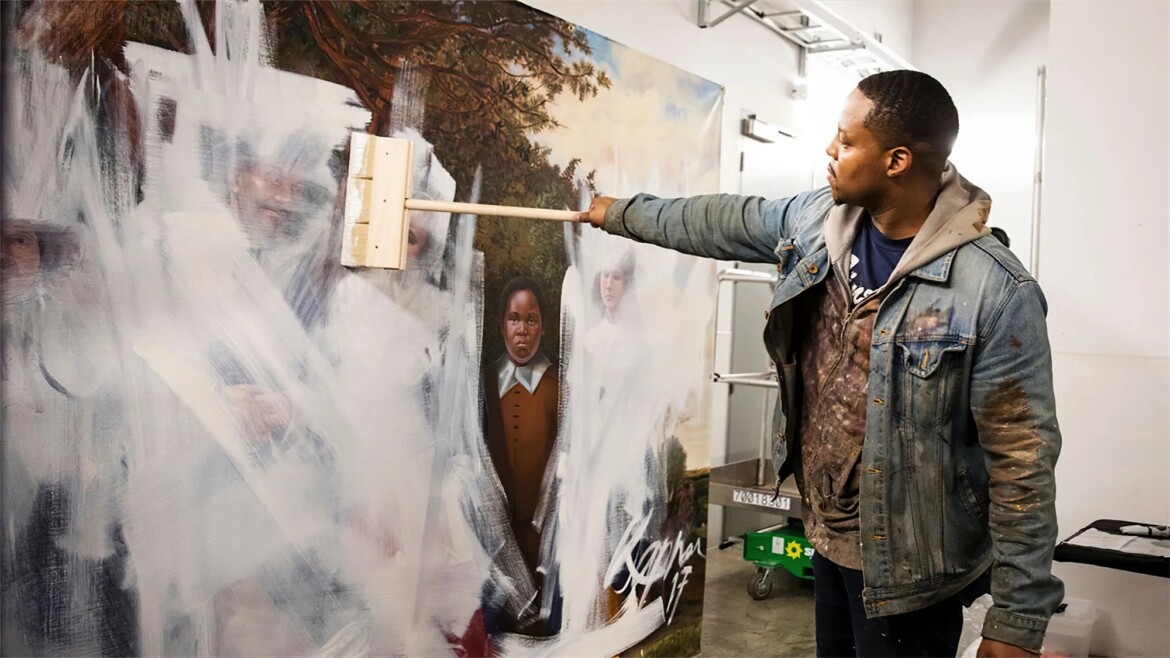 Artist Titus Kaphar appears in a scene from "Shut Up and Paint," a documentary that will screen Jan. 5 at the Museum of the African Diaspora in San Francisco. Kaphar and filmmaker Alex Mallis will be on hand for a Q & A. (Courtesy Revolution Ready)

Freebie of the week: It must be a cruel irony for an artist: Your career takes off as your work gains increasing notice and acclaim, but the attention and success seems to only take you further away from those you wanted to reach in the first place.

That’s the predicament faced by painter and activist Titus Kaphar, who earned his bachelor of fine arts degree from San Jose State University in 2001. Kaphar, a Black a civil rights activist who often weaves racial issues into his works, creates paintings in which the canvas has been slashed or altered in some way. One of his best-known works, “Behind the Myth of Benevolence,” re-creates a famous 19th-century portrait of Thomas Jefferson that’s peeled back to reveal Sally Hemings, one of his slaves with whom he had several children.

In a new 24-minute documentary, “Shut Up and Paint,” Kaphar and filmmaker Alex Mallis explore Kaphar’s rise as a painter although some in the arts world are uncomfortable with his outspoken views. The title of the film comes from a phone message in which the caller, a European gallery owner, advises Kaphar to let up on the politicizing and “shut up and paint.”

At 6:30 p.m. Thursday, “Shut Up and Paint,” which has been nominated for an Oscar, screens at the Museum of the African Diaspora, 685 Mission St., in San Francisco. Kaphar and Mallis will be on hand and engage in a Q&A with art historian Bridget R. Cooks after the screening. The event is free. More information is at www.moadsf.org.

An icon returns to Berkeley: Cris Williamson is a legend in the popular music world whose impact extends to, well, pretty much any female artist who records her own music and runs her own career. She was a founding member in the early 1970s of Olivia Records, considered the first label that was owned and operated by women and represented women artists.

On that label in 1975, Williamson released the now-legendary album “The Changer and the Changed,” which remains one of the best-selling independent releases of all time and, with its focus on political, feminist and LGBTQ themes, helped usher in the “women’s music” genre. She later formed her own label, Wolf Moon Records.

In all, she has released some 40 albums, including 2022’s “Harbor Street.” Williamson, considered an icon of the second-wave feminist movement, has been credited as an inspiration by artists ranging from Melissa Etheridge to k.d. lang to bands in the Riot Grrrls movement. Bonnie Raitt calls her a hero and has said of her music, “The first time I heard Cris’ music, it was like honey dropped on a cello.”

Williamson, who has sold out Carnegie Hall and headlined folk festivals across the country, returns to Berkeley’s Freight & Salvage on Friday and Saturday, with a packed roster of guest artists that includes Barbara Higbie, Julie Wolf, Katie Cash, Kofy Brown, Shelley Doty, Vicki Randle and more. Performances are 7 p.m.; masks must be worn in the venue. Tickets are $45-$65. Go to thefreight.org.

Celebrating Aretha: The legendary Aretha Franklin, who died 4½ years ago, was one of those artists whose transcendent voice pops clearly in your head at the mention of her name. An amalgam of raw power, emotion, spirituality, vulnerability and savvy, Franklin’s singing remains a treasure that will never be duplicated or even approximated.

But that doesn’t mean people can’t celebrate her in concert. That’s the idea behind the new touring show “R.E.S.P.E.C.T.: A Celebration of the Music of Aretha Franklin,” which lands at San Francisco’s Golden Gate Theatre on Taylor and Market streets for a two-show run. Shouldering the Franklin role is young Brooklyn-based singer Trejah Bostic, who’ll be backed by vocalists and hosts Meghan Dawson, Nattalyee Randall and Ashton Weekes.

Performances are 8 p.m. Friday and 2 p.m. Saturday. The multimedia show touches on Franklin’s epic life, but most importantly, serves up spirited renditions of classic tunes such as “Natural Woman,” “Think,” “I Knew You Were Waiting for Me,” “Chain of Fools,” and “Respect.” Tickets are $46-$96. Go to www.broadwaysf.com.

Curated with loving care: Berkeley-based pianist Sarah Cahill, also a faculty member of the San Francisco Conservatory of Music and the host of the weekly classical music radio show “Revolutions Per Minute,” is a well-known champion both of new music and especially, through her “The Future Is Female” project, music by women composers from around the globe and down through the ages.

She brings both those passions to bear on her upcoming recital for Old First Concerts, which takes place at 8 p.m. Friday in the Old First Church at 1751 Sacramento St. in San Francisco. On her program are four world premieres, including “Humanitas,” which she commissioned from her frequent collaborator, the late Frederic Rzewski, before he died in 2021. The piece was composed in honor of his friend and fellow composer Terry Riley’s 85th birthday.

Tickets, $5-$25, are available at oldfirstconcerts.org, where you will also find a link to listen by livestream for a suggested donation of $20.

Big-screen beasties: Wawk! Who let the dinos out?! Sam Neill, Laura Dern, Jeff Goldblum et. al scurry around the greenery trying to dodge the rampaging T. rex and his ilk in Steven Spielberg’s award-winning “Jurassic Park,” an epic scarefest from 1993.

Could it get more terrifying? Well, yes, if you’re watching it on a big screen overhead while a full-scale symphony orchestra plays John Williams’ harrowing score live.

Guest Conductor Constantine Kitsopoulos leads the San Francisco Symphony through two performances in Davies Hall at 7:30 p.m. Friday and Saturday. As usual, the cheapest seats have been snapped up, but many remain for both screenings. Find them, $175-$275, at 415-864-6000 or www.sfsymphony.org.