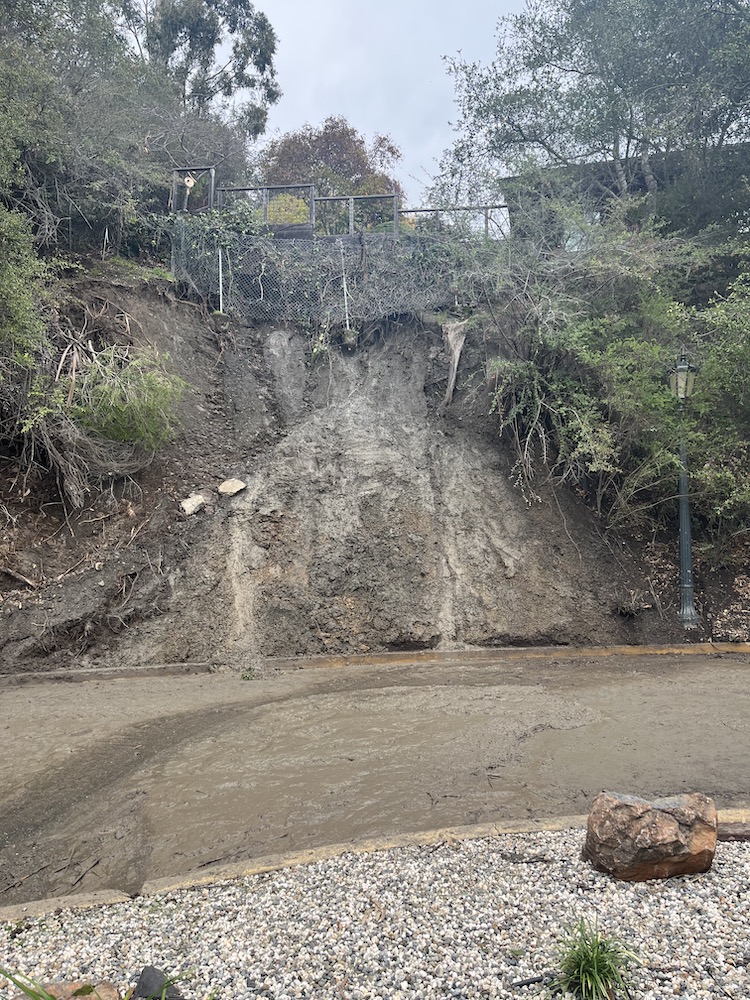 Mudslide on Somerset Ave. after the Dec. 31 storm.

Piedmont saw more toppled trees, soggy basements, and leaky roofs after Wednesday’s big storm: Between 2 and 4 inches of rain doused much of the Bay Area Wednesday and Thursday, with rainfall totals as high as 5 inches at some higher elevations, according to the National Weather Service. The region received the most rainfall from Skyline Boulevard along the Peninsula down to the Santa Cruz Mountains, according to data from the weather service’s Bay Area office, with up to 5 inches in some areas.

Storm surges along the coast reached heights of 30 feet, briefly inundating low-lying areas of Stinson Beach and causing widespread damage in Capitola, Aptos, and other areas along the Santa Cruz County coastline.

The rain and high winds, with gusts reaching as high as 100 mph in some parts of the Bay Area, caused power outages for nearly half a million customers, according to PG&E. Officials with the utility company said some 440,000 customers had lost power due to the two-day storm, with power restored to roughly 325,000 of those customers as of noon Thursday.

“We anticipate that those customers that are still without power will take a little bit longer to restore because we don’t have access to many of the areas or we have really dangerous conditions for our crews,” said Janisse Quinones, PG&E’s senior vice president for electric operations. “Trees are falling are falling around them, we have flooding and soil movement when they’re trying to restore service,” Quinones said, adding that crews in Santa Cruz and along the Peninsula were briefly pulled from both areas for their safety due to landslides and high winds.

In an effort to restore power to those affected by the storm, PG&E is receiving mutual aid from utilities in other California cities as well as Oregon, New Mexico, Utah, Washington, Montana, Idaho, and Wyoming.

The Bay Area is only expected to have a one-day reprieve Friday from rainy and windy conditions as weather service officials are forecasting two more “significant” storm systems to enter the region, one on Saturday and Sunday and one on Monday and Tuesday. The heaviest storm system is expected early next week, with an “extreme” risk level of flooding and mud slides and wind gusts of 40 to 60 mph. Between 1 and 3 inches of rain are likely on Saturday and Sunday in much of the Bay Area and along the Central Coast, with 2-4 inches likely on Monday and Tuesday. Higher elevations could see as much as 6 inches on all four days, according to the weather service, and up to 8 inches in the North Bay mountains.

“A series of potent weather systems will impact our area this weekend into next week,” the weather service’s Bay Area office said Friday. “Associated hazards include widespread flooding, damaging winds and dangerous beach and marine conditions.” Both storms have the potential to be deadly, the weather service said. Forecasters have suggested that storm systems could continue pelting Northern California into mid-January.

Weather forecast updates from the weather service can be found at https://www.weather.gov/mtr