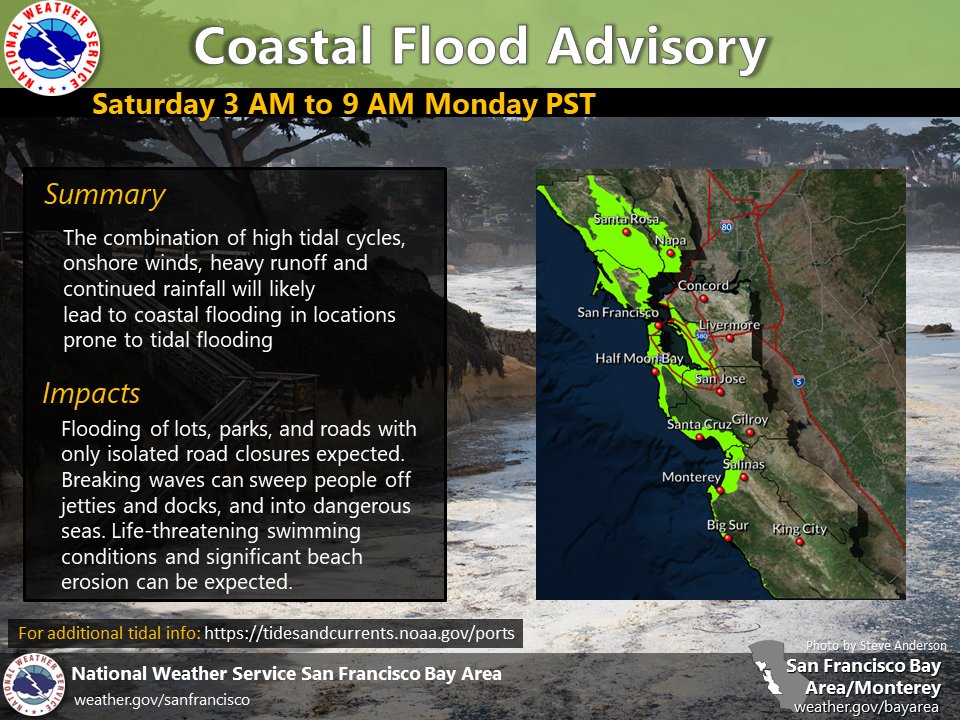 Another atmospheric river is expected to wash over the Bay Area this weekend, bringing significant risks of flooding in coastal areas and in some riversheds. Wind gusts of up to 45 mph are also possible throughout most of the Bay Area during the weekend, with more intense gusts likely at higher elevations. As a result, falling debris, downed power lines and downed trees are once again expected to threaten human life throughout the storm’s duration.

Forecasters with the National Weather Service’s Bay Area office expect showers throughout Friday before steadier rain arrives on Saturday. Most of the nine-county Bay Area could receive 3-4 inches of rain through Monday.

The weather service has placed the entire Bay Area and Central Coast under a flood watch from 4 a.m. Saturday through Monday afternoon. Coastal areas are also under a High Surf Warning through 10 a.m. Saturday. Showers could continue early next week, according to forecasters, before a high-pressure system moves into the area next weekend that should bring warm and dry weather.

The North Bay and Santa Cruz and Monterey counties face the highest risk of flooding, high winds and high surf with waves of 20-25 feet during the storm, according to the weather service, as both areas are forecasted to receive between 4 and 6 inches of rain along the coast and at higher elevations.

Most of the rain Saturday will fall in a roughly six-hour window, according to forecasters, before giving way to showers Saturday night and into Sunday. A second storm system is then expected to pass over the region Sunday evening into Monday.

As a result of the rain and subsequent flooding of the Salinas River, parts of Monterey County could be cut off and effectively turned into an island for two to three days, according to county officials. While the county’s bridges in the Salinas River basin are not expected to be at risk of severe damage during the storm, roadways approaching the bridges, low-lying intersections and local surface streets could be flooded through Sunday night.

Evacuation orders are already in effect for low-lying areas along the Salinas River from north of Highway 68 to the coast. Evacuation order information for Monterey County can be found HERE.