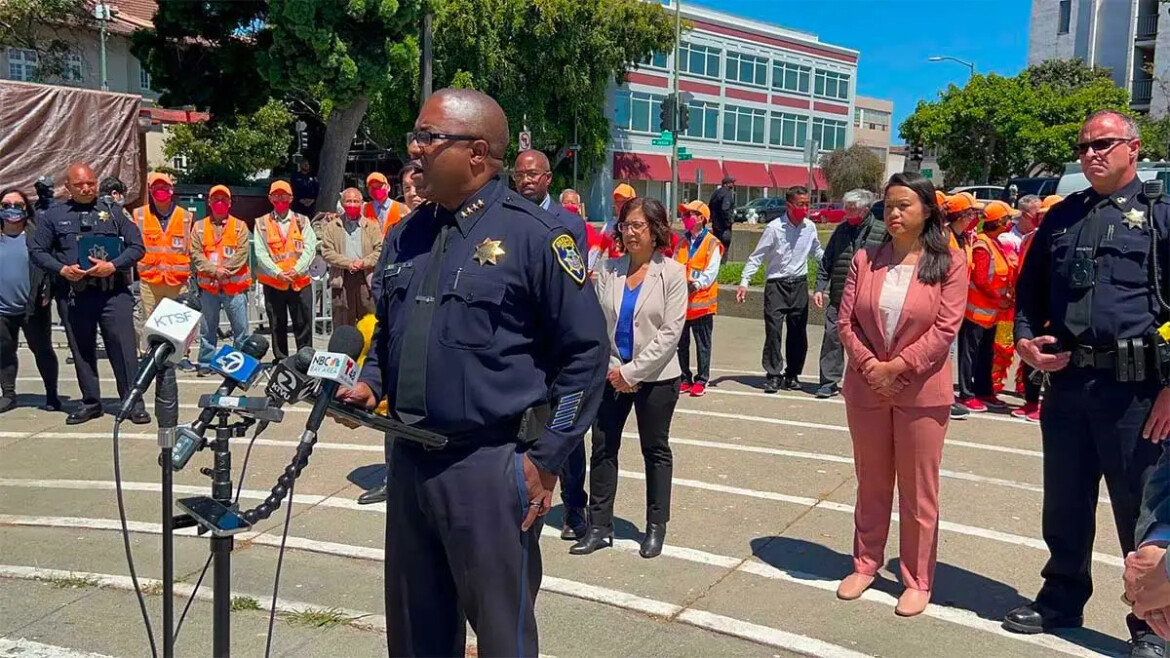 Oakland Police Chief LeRonne Armstrong addresses the media on July 20, 2022, as then-Oakland City Council member Sheng Thao looks on. Armstrong responded Monday to a decision to place him on paid administrative leave following a report of alleged misconduct by an OPD sergeant that was not properly handled. (File photo courtesy of Oakland Police Department/Facebook)

Oakland Police Chief LeRonne Armstrong, who was placed on leave by Mayor Sheng Thao last week, said Monday he deserves to be reinstated immediately and blamed a federal monitor overseeing police for his current predicament.

Armstrong released a statement saying he was placed on leave because of “self-interest” by the federal monitor Robert Warshaw.

The Oakland Police Department has been under federal oversight for about 20 years.

“I want the public to know I followed all policies, protocols and procedures in the two incidents that are detailed in the recently-released summary report,” Armstrong said.

That report alleged, among other things, two infractions by a sergeant. The sergeant’s first infraction was allegedly leaving the scene of a March 2021 collision that he was involved in and failing to report the collision. The sergeant was driving a police vehicle when the collision occurred.

The second infraction was the alleged accidental firing of a gun in April 2022 in the freight elevator of police headquarters and waiting a week to report that. The sergeant also allegedly removed evidence of the discharge.

“I want the public to know I followed all policies, protocols and procedures in the two incidents that are detailed in the recently-released summary report.”

“But neither the department — nor myself as Chief — ever had the opportunity to take full and appropriate disciplinary action against the officer because the Federal monitor Robert Warshaw took the investigation out of my hands so that he could handle it himself,” Armstrong added.

Warshaw “did not act appropriately or honestly,” Armstrong said. “Mr. Warshaw acted in the interest of his own pocketbook by manufacturing a false crisis to justify extending his lucrative monitoring contract.”

On Saturday, however, Thao defended the decision to place Armstrong on administrative leave during a news conference on the steps of Oakland City Hall. The newly elected mayor said the move was not punitive.

The mayor added, “This is about public safety.”

Flanked by members of her administrative staff, Thao said she was in Washington D.C. When the decision to put the chief on leave was announced.

The action has sparked outrage among some members of the community who believe it was premature pending more investigation of the information in the report.

After reading the 16-page report, “I have come to the conclusion that the decision to put Chief Armstrong on Administrative leave was excessive, and if I were Mayor, I would not have done it,” said Taylor in a statement.

“The magnitude of the discipline levied in this instance does not match the nature of the infraction documented by the report,” Taylor said.

“In the report, the chief is faulted for not knowing about and not acting on information that the report acknowledges was withheld from him by Internal Affairs staff during his Friday briefing,” Taylor said.

The former councilmember added, “The report also mentions that the Chief did not ‘permit’ extensive discussion of the case, nor did he thoroughly read the accompanying written report. Assuming that this is true, we don’t have the benefit of Chief Armstrong’s explanation of why he believed that deeper review and discussion were not needed.

“It could easily be that he believed the discussion to have already been sufficiently thorough based on the information presented to him and decided to move on to his review of the next case,” Taylor said.

The investigative report was written by the law firm Clarence Dyer and Cohen LLP, which was hired last year by the city of Oakland.

“We have to hold officers accountable when they violate the public trust,” Thao said Thursday.

Taylor is not the only Oakland voice speaking in support of the police chief.

One example is Brenda Grisham, executive director of the Christopher LaVell Jones Foundation, which honors her son who was murdered in Oakland in 2010. She said the report only tells one side of the story.

She described the infraction by the sergeant as petty and said the community is going to stand behind the chief. She has known Armstrong for years and said she sighed in relief when he became chief.

Taylor urged residents to contact the mayor and City Council to share their opinions about the decision to place the chief on leave.

A Change.org petition in support of Armstrong and calling for his immediate reinstatement as chief of police had received nearly 750 signatures as of late Monday.