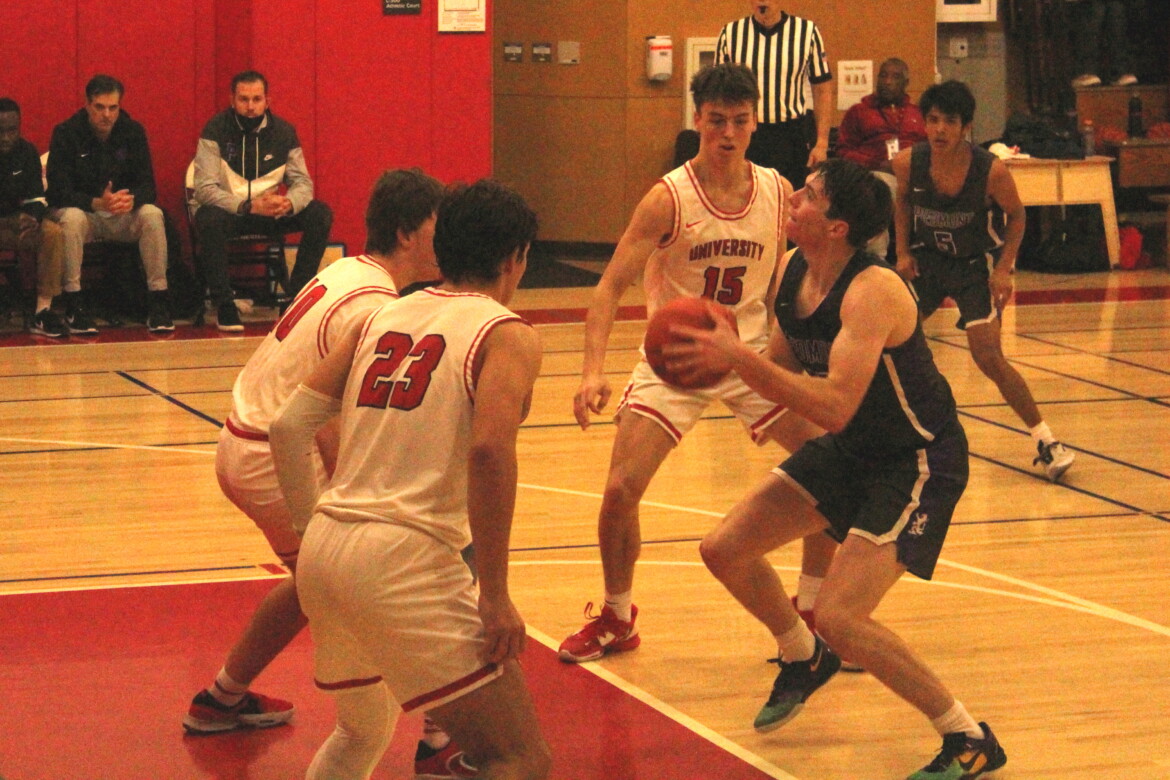 The Red Devils led 81-54 in the second half before the Highlanders were able to make the score respectable.

“We really game-planned to stop A.J.,” University coach Randy Bessolo said. “And I guess we didn’t do a very good job because we didn’t stop him at all at 42. I don’t think that our scheme was bad or our effort was bad. I think our effort was tremendous. It’s just all about A.J. being a special player.”

Harris was 14 of 22 from the floor. The rest of Piedmont went 13 of 38. Brit Burden finished with 16 points for the Highlanders, but was just two of 12 from the field in the first half, scoring just four points.

Still, Piedmont was in the game at halftime, trailing just 41-36. But University’s pressure defense and rebounding wore the Highlanders down in then second half.

“Same conversation every year and feels like the same result, which is super-disappointing,” Piedmont coach Ben Spencer said. “We played with them in the first half, and we just didn’t make some shots. Our shooting struggles continue. This is the third game in a row. Other than A.J. tonight, we just shot the ball really poorly.”

It was quickly apparent that Harris was going to have to shoulder the offensive load. He scored 13 of the Highlanders 17 first quarter points, making all five of his shots. Burden meantime was zero for five and Piedmont was one for eight outside of Harris. University took a 20-17 lead.

The Red Devils opened up a 10-point lead in the second quarter, but the Highlanders rallied back. Harris beat double- and triple-teams to score 11 more.

But any optimism that generated was lost early in the third quarter. Piedmont had just four turnovers in the first half, but committed eight in the second half. Further, University began flexing its muscles on the boards. Harris ended up with a game-high 12 rebounds, but the Red Devils outrebounded the Highlanders, 33-25. University started four players at least 6-foot-3.

Piedmont also had trouble defending the break. All five Red Devils starters scored in double-figures, led by Cole Boake with 20. Gus Parsons had 18 and Joey Kennedy had 16 plus eight rebounds.

“We really like to push the pace of the game,” Boake said. “We play all 11 guys so we push the tempo of the game and tire the other team out. A lot of our games end up where we pull away at the start of the second half because they’re kind of losing energy at that point, so that’s what we expect.”

Boake called the game his team’s best offensive game of the season.

“We put up eighty-some points,” he said. “We really played every offensive possession with purpose. Everyone was able to get their looks tonight.”

Will Perkins and Luke Bradley each scored 13 for University.

“For as poorly as I thought we played defensively, I think that was the most points we’ve given up in the first half the past two years,” Spencer said. “You’re not going to beat teams giving up 40 and 40 in any half. We’re trying to hold teams to 40 a game. It became a little bit of mental toughness, whatever it was in the third quarter, they opened it up from a five-point lead to an 18-point lead and that was the ballgame. It was two ½, three-minutes of bad basketball and the game’s over.”

The loss dropped the Highlanders to 4-2 on the season. University improved to 4-1.

On December 2, Piedmont dropped its first game of the season, falling to Acalanes in the semifinals of the Piedmont Tournament, 56-49. Harris scored 21 to lead the Highlanders while Burden added 12, all in the second half. The game was tied 31-31 at the end of three quarters before the Dons pulled away at the end. Jake Davis scored 13 of his game-high 26 points in the fourth quarter for Acalanes. Theo Stoll had eight of his 10 in the final period.

The next day, Piedmont defeated Northgate 46-43 in the third place game. Burden had 13 points and Harris was held to 11. Jake Andjus and Jake Bonen each scored 10 points for the Broncos.

Piedmont opened the Washington Tournament against Mission San Jose on December 8. That tournament continues through December 10.