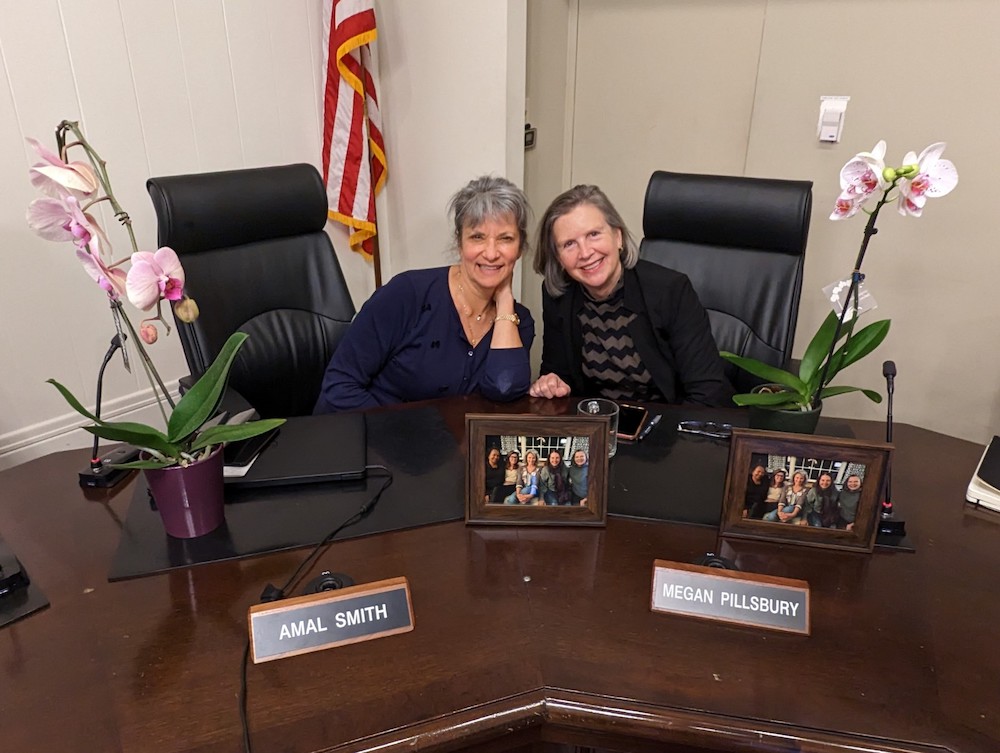 Departing PUSD School Board members at their final meeting.

Things got a bit emotional at the Piedmont Unified School District Board of Education meeting on Dec. 14. To the point that board members were passing a box of tissues around the dais.

It was the final meeting for board members Megan Pillsbury and Amal Smith and time was set aside for both current members and the general public to pay tribute to Pillsbury and Smith.

“Thank you Amal and Megan for everything that you’ve done for this community, for this board,” interim superintendent Dr. Donald Evans said. “I just want to acknowledge the skills the talents and the gifts you brought to our community. You definitely left a legacy. I’ve only been here six months and I can just see the impact of what both of you have done.”

Said current city council member Betsy Andersen, “I cannot think of two more thoughtful individuals than both of you. You have both set a high bar of integrity and resilience and true commitment to our community during what has been a really challenging time.”

Smith was termed out after nearly nine years on the Board. Pillsbury served one four-year term but has moved to Inverness for retirement.

“Thank you to both of you,” Board member Hilary Cooper said. “I now know what this job entails. Amal, I cannot believe you’re in your ninth year. My hat is off to you. That is a tremendous debt that this community owes you.

“And Megan, I’m sorry we won’t have you for another four years. But thank you so much for all of your advice along the way.”

Board member Veronica Anderson Thigpen said that Pillsbury gets “the credit or the blame for recruiting me to run for the school board.”

“Megan is also the heart of our board,” Anderson Thigpen continued. “She has handled the board correspondence. In doing that she took the time to track down answers to questions she made connections to help people find answers and wrote really detailed and personal responses. This was especially true during the pandemic when we all needed to know what was going on and trust that someone cared.”

Board president Cory Smegal calculated that Smith must have participated in over 700 school board meetings.

“I think everybody would agree that you definitely are a straight shooter. You call it as you see it. I think that’s really commendable.”

Former board members Sarah Pearson and Doug Ireland both spoke in person. Another former board member, Andrea Swenson, spoke via Zoom. Rick Smith, husband to Amal, raced to the lectern to speak, sending the tissue box around the dais again when he spoke of his love for her.

The honorees appeared to be deeply moved.

“Today ends my 30-year involvement with the Piedmont Unified School District,” Pillsbury said, alluding to the first day her youngest son entered kindergarten, then a career as a teacher in the district and her time on the board.

She spoke of the murder of George Floyd and the pandemic, and how those events “uncovered areas in our district where we had been complacent in meeting the needs of all of our students.” She said when she first took office, she envisioned an organizational chart that was “flipped over,” with students “at the top rather than the bottom.”

“I’ll always be so grateful to all of our wonderful students,” she said. “They are the reason we are all here.”

Smith, who has worked for the University of California for many years, said, “A very significant portion of my work, both professional and volunteer, has been dedicated to education. I support institutions that are committed to nurturing, learning, curiosity and well-being. And I have to my core belief that education is the rising tide that lifts all boats.”

She concluded, “I thank everyone for the opportunity to serve, to learn and to engage. It has truly been a privilege.”