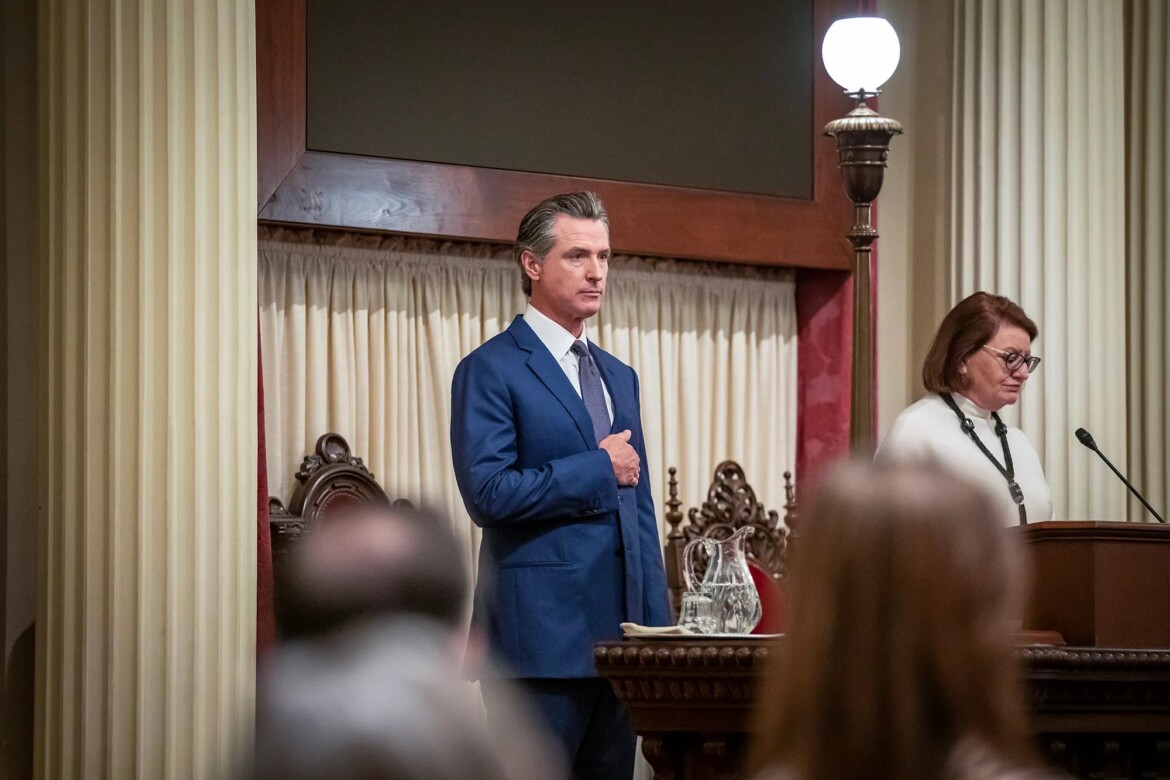 Gov. Gavin Newsom stands for the Pledge of Allegiance in the state Senate chamber as the new California Legislature is sworn into office on Dec. 5, 2022. Photo by Martin do Nascimento, CalMatters

California regulators would cap the profit margin for oil refiners and could fine companies that exceed that limit under a proposal announced Monday by Gov. Gavin Newsom, the latest escalation in his battle with the oil industry over a summer of record gas prices.

Newsom unveiled the measure, which does not yet include key details such as how much profit oil refiners would be allowed or the size of possible fines, on the same day that newly-elected legislators arrived in Sacramento to be sworn in — and to declare a special session to consider the plan that the governor has dubbed a “price gouging penalty.”

In brief remarks to reporters at the state Capitol, Newsom said the fines would act as a deterrent to future price spikes. He said he would take the next month or more to fill in the blanks of the bill, in consultation with lawmakers, who are set to reconvene Jan. 4 to begin the new session in earnest.

“I believe in free enterprise, I just don’t believe in greed,” Newsom said. “These guys have been gaming the system for decades. They’ve been taking advantage of you for decades. And it’s got to end.”

While legislators were hesitant Monday to embrace the half-formed proposal — even state Sen. Nancy Skinner, the Berkeley Democrat who introduced the bill, told CalMatters that it was the governor’s plan and she “put it across the desk to make sure the vetting process can begin” — oil companies quickly condemned it as a wrongheaded approach that would raise prices at the pump by increasing their costs.

“A fee imposed on the industry as a commodity going to the government, that is going to look and act like a tax,” said Kevin Slagle, spokesperson for the Western States Petroleum Association, which represents the oil industry. “We know windfall taxes have been tried nationally and don’t work. What we need to do is focus on better public policy.”

Newsom’s proposal, which also directs regulators to collect the financial penalties in a fund that would be reimbursed to California residents, represents a slight shift in strategy.

In October, after gas prices soared to more than $6 per gallon in California and widened the usual gap with the national average, the governor vowed to call a special legislative session to tax what he considered excessive profits in the oil industry. His announcement came just weeks before the Nov. 8 election.

But the preliminary bill language includes no mention of a tax. Instead, the fines that oil refiners could be charged for exceeding the profit margin cap are considered administrative penalties. That allows the Legislature to pass the measure with a simple majority, rather than the two-thirds vote required for taxes.

Newsom denied that he had made a political calculation to ease the path forward.

“That’s not part of my consciousness. It’s about what’s right and wrong,” he told reporters, further brushing off questions about the mechanism for distributing the penalties to Californians. “I hope we never have to go there, because I hope the oil companies change their ways.”

Severin Borenstein, an energy economist at UC Berkeley, agreed that the financial penalties could have a stronger deterrent effect than a tax because oil companies might be more motivated to hold prices down to not appear like scofflaws. But he was doubtful that limiting refiners’ profits would consistently lead to lower prices at the pump.

“That doesn’t require the gas station owners to reduce their price,” said Borenstein, a former chairperson of the California Energy Commission’s Petroleum Market Advisory Committee. If there’s a limited supply of gas, he said, “why wouldn’t they charge a higher price?”

Newsom’s proposal presents an early high-stakes issue for the new Legislature, which is the most diverse in California history and about one-third of whom are new to Sacramento.

As the swearing-in ceremonies kicked off Monday, activists from Greenpeace briefly hung banners from the balcony of the Capitol rotunda calling on lawmakers to put “people over profit” and “make big oil pay.”

Though more than three-quarters of both legislative chambers is now composed of Democrats, the price gouging penalty appears likely to be a heavy lift for the governor, especially as the oil industry and Republican opponents work to spin it as a tax by another name.

“The t-word is scary, even among Democrats,” said Assemblymember Alex Lee, a Milpitas Democrat who unsuccessfully introduced a windfall profits tax bill earlier this year.

He expressed frustration that Newsom had not engaged legislators more in the two months since announcing the special session.

Assemblymember Jacqui Irwin, a Thousand Oaks Democrat, said that after reading what economists have written about windfall profits taxes, she was skeptical that the governor could come up with a plan that she could get behind.

“It would certainly be problematic if in the short term it leads to higher prices for consumers,” she said.

Several legislators told CalMatters that they were waiting to review the details of the governor’s proposal, but generally supported efforts to address the large difference in price for gasoline between California and other states.

“I do think it was wise of the governor to open an extraordinary session then and get a conversation started,” said new state Sen. Angelique Ashby, who beat a fellow Democrat for a Sacramento-area seat after about $2 million in outside spending by oil companies and utilities whose support she has since renounced. “You heard my ‘aye’ vote today.”