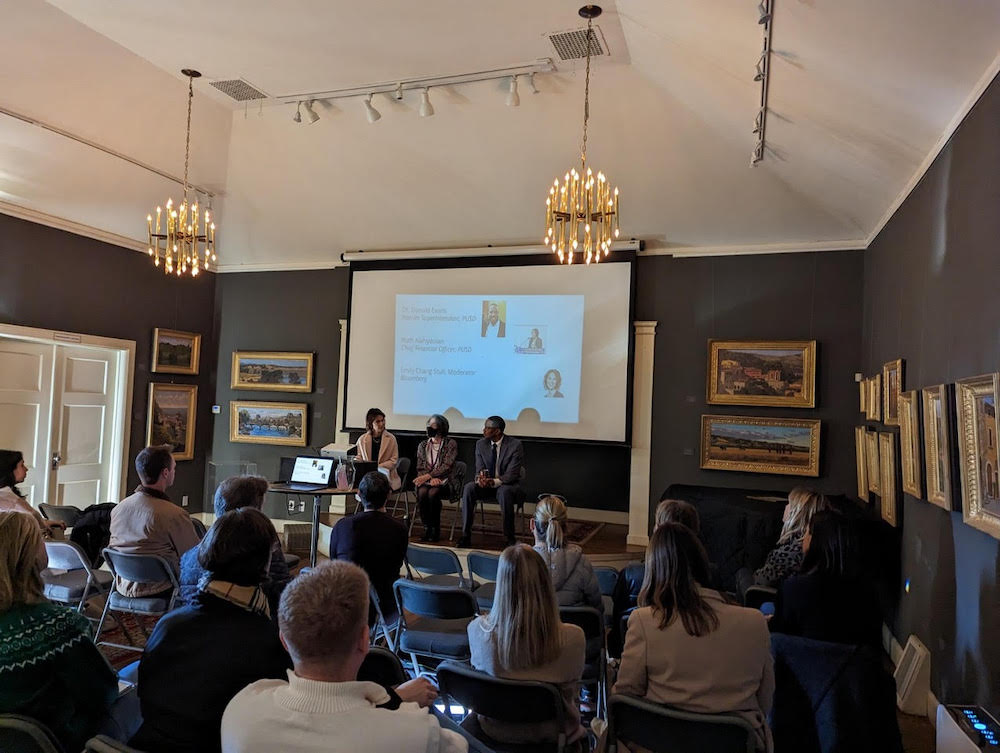 On Wednesday, Dec. 14, community members gathered at the Piedmont Center for the Arts for a discussion with Piedmont Unified School District (PUSD) Interim Superintendent Dr. Donald Evans and Chief Financial Officer Ruth Alahydoian. The Giving Campaign team facilitated and hosted the event, which focused on an overview of PUSD funding sources and expenses, and the financial challenges that the district faces. Approximately 25 community members attended. Emily Chang Stull, an award-winning author and Bloomberg producer and host, moderated the event.

Interim superintendent Dr. Evans highlighted the unique nature of what Piedmont schools offer students compared to many other public school districts, thanks to community fundraising efforts like the Giving Campaign. “If you go up and down the state (of California), you don’t see fully structured art programs,” he said. “You don’t see structured music programs or technology programs. You don’t see fully operational libraries. Even in some of the highest achieving districts, you will not see all those things…like you see here.”

PUSD CFO Ruth Alahydoian presented information about how the state funding model works and the expenses involved in running PUSD. “It was so illuminating,” said Giving Campaign co-chair Katie Sharafi. “California gives us only 50% of what we need to operate our schools. The rest we need to find through local sources and fundraising.” Alahydoian also highlighted the importance of reflecting community priorities in funding decisions. “The dollars that we get in donations… it’s important that we spend it as people ask us to spend it,” she noted.

Piedmont Education Foundation’s Heather Frank shared information about how the district allocates funds raised by PEF. “Every year, we convene a grants committee that includes a representative from every parent’s club and support group in the district, along with community and PEF board members, the district superintendent, assistant superintendent, and CFO,” she said. “The committee reviews grant spending from the prior year and then determines what community priorities are for distributing funds for the upcoming year.”

Questions from the audience ranged from how the district prioritizes areas for funding cuts to the most significant upcoming expenses for the district. Superintendent Evans noted that healthcare costs for PUSD employees continue to skyrocket and are completely out of the district’s control. Dr. Evans, who has worked in public school districts of all sizes throughout California, feels that Piedmont is unique in the strength of its teaching community. “I am so grateful for what we have here,” he said “Our PUSD teachers are really invested in their classroom and their kids and so committed to their work. That is not true everywhere. What we have here is really exceptional.”

He noted that while this year’s 7.5 % teacher raise (made possible by last year’s Giving Campaign fundraising and state distributions) was much higher than raises given by many other districts, the district needs to remain competitive with benefits as well. “To…keep teachers, and give the salaries we want to give them, you have to cut! And what goes out are those things…(art, music, and STEAM programs) that really define us here, that we take for granted.”

As the 2022 Giving Campaign comes to a close, they have raised just short of $3 million. But as much as the ending amount, the team is focusing on participation – parent participation is still under 50%. “Every dollar counts,” says Sharafi. “But getting the community involved is what we’re most focused on right now.”

Learn more about the Piedmont Education Foundation’s Giving Campaign or how to donate HERE.