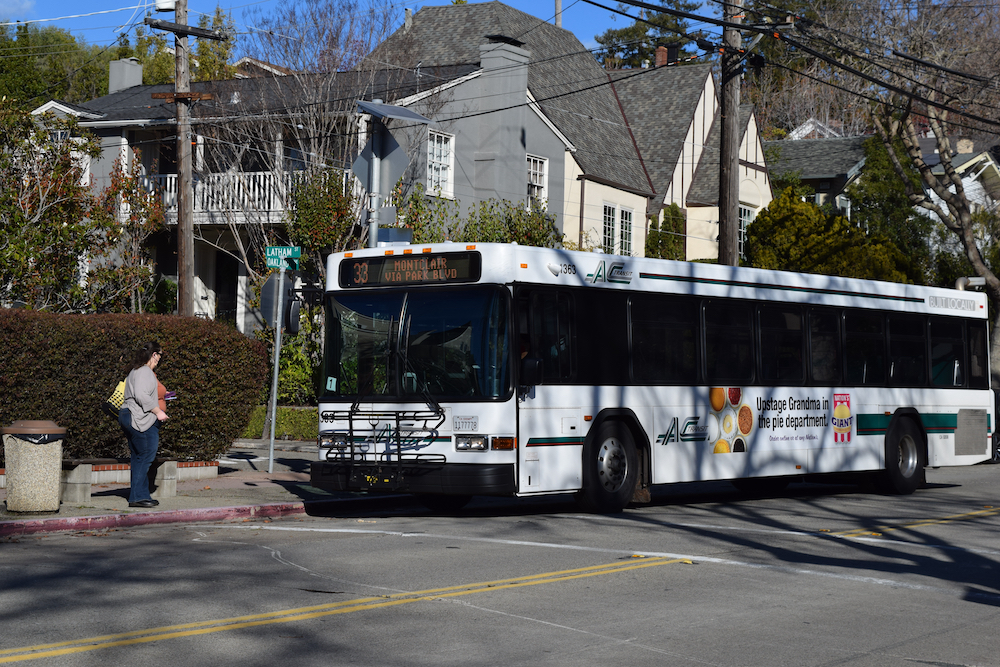 The city continues to work with AC Transit on where four bus stops along Oakland Avenue will be located as part of a long-planned safety “bulb-out” project, and city staff and residents are hopeful that those bus stops can remain essentially where they are now when the work is done.

This comes after some concern that, for safety reasons, the bus stops at the Oakland Avenue/Jerome Avenue and Oakland Avenue/El Cerrito Avenue intersections would need to be relocated as part of the work to make permanent bulb-outs. The bulb-outs are designed to make the street narrower at those spots, making the pedestrian crossings shorter and thus safer, and also, to an extent, slowing traffic.

But the prospect of moving the bus stops to locations directly in front of homes has drawn criticism from neighbors who say they’ll lose parking spaces and will have appreciably more activity in front of their homes.

Kathy Moody, who has lived on Oakland Avenue near Jerome for 45 years, said the plan that was unveiled at a Nov. 1 meeting of city staff and Oakland Avenue neighbors near the Jerome Avenue intersection, which called for moving the bus stops to immediately in front of houses that hadn’t hosted them before, was unpopular with residents. That meeting, Moody said, was the first time any of them had heard of the prospective bus stop moves to, in her words, “in front of people’s front doors.”

“We were never notified or given a chance to discuss this,” Moody said in November.

As part of that review, the transit agency told the city that the bulb-out design guidelines would require the relocation of the bus stops to the far side of the two intersections. The reasons for the bus stops’ move, Gonzales said in an email, would be “ to increase sight-distance for pedestrians.”

“This component of the project was not part of the original design,” Gonzales said in an email.

The project – in discussion since at least early 2019 – also calls for high-visibility crosswalks, new pedestrian ramps, improved bright yellow “rectangular rapid flashing beacons,” along with refreshed street paint and new signage at both of those intersections. Like previously built bulb-outs in Piedmont, these designs also allow for the installation of landscaping.

The first draft plans were announced more than a year ago, in October 2021.

“This isn’t a bulb-out issue – it’s a bus stop issue,” said Constantine, who said previous bus stop location efforts on Oakland Avenue reflected care taken not to put them in front of houses.”I love my neighbors, and I don’t want this to happen.”

In early December, Gonzales said that he and other Piedmont Public Works officials met several times with AC Transit representatives over the previous month or so. It appears at this point, he said, that the bus stops will probably get to stay where they are now.

But wherever the bus stops end up, there will be some changes, Gonzales said.

“The current (or new) bus stop area will need to be expanded to 110 feet each, and that will impact/prohibit a few additional parking spaces than were originally identified,” Gonzales said in an email. “But it will be much less parking loss than our initial design envisioned.”

But Gonzales stressed that these designs are drafts and are pending review. The city was set to review the latest revised design with AC Transit planners last week and again this week and next. Gonzales said he expects another public meeting will be scheduled with residents in the next few weeks, and that the design can come to the Piedmont City Council in mid-January for discussion.

The city hopes to finalize a design, release the project for bidding, and have construction underway by summer 2023, Gonzales said.

When apprised of the most recent discussions between the city and AC Transit, and the likelihood that the bus stops would remain where they are, Moody said it would be a “positive outcome.”