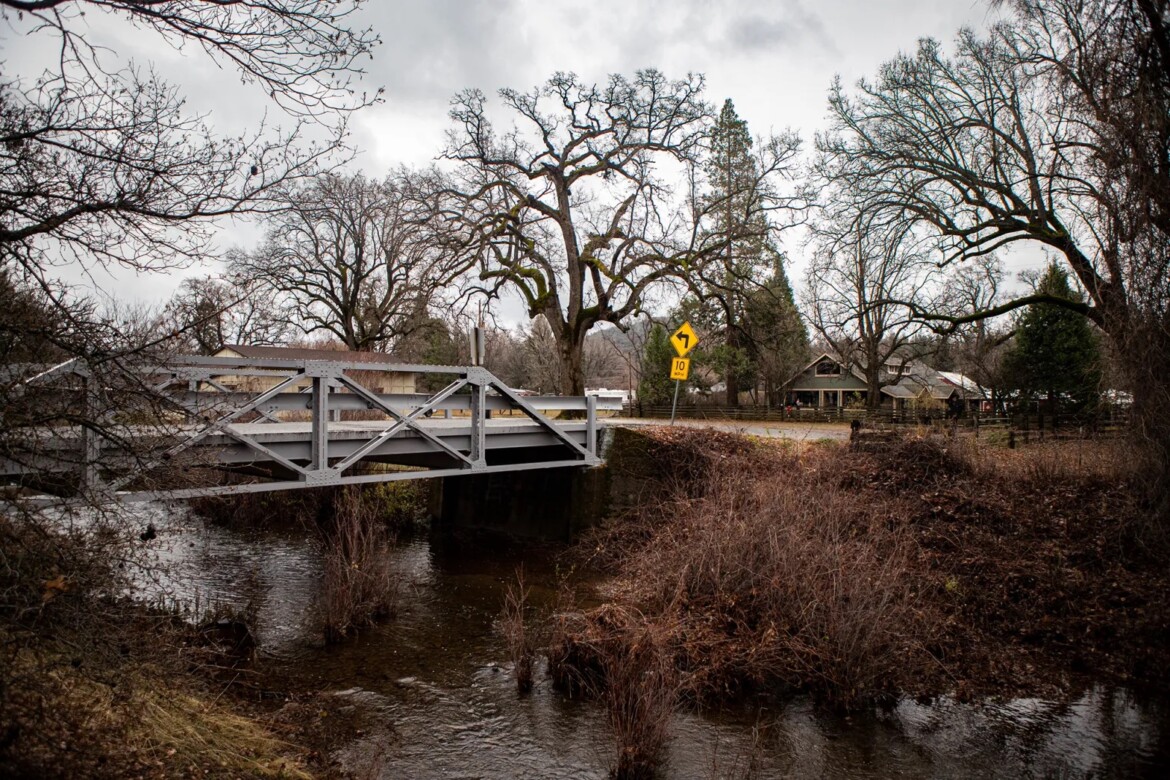 A bridge going over the creek leading to the rural community of Paynes Creek on Dec. 9, 2022. Photo by Larry Valenzuela for CalMatters

Under a low, heavy sky threatening sleet or snow, State Route 36 twists and turns along tree-topped ridges. In many spots, there’s no guardrail — just a spit of dirt between a driver and a thousand-foot drop.

This is a county where people are expected to take care of themselves, and in the last month, Tehama County itself has been operating without its own guardrail: Outgoing Sheriff Dave Hencratt said last month that deputies would no longer patrol during the day.

“This added reduction of services is necessary to manage a catastrophic staffing shortage throughout the agency,” Hencratt said in a Nov. 8 press release.

On a recent December morning, lots of people’s faces hung low and heavy as the clouds.

The sheriff frowned when he met a reporter at midday on the edge of his property, dressed in barn clothes, declining to comment. The county administrator frowned because the sheriff’s abrupt decision threw his office into chaos. The tavern owner frowned because he works 23 miles outside of town and hasn’t seen a patrol car in weeks. The elected leaders, the motel owners, the rural residents left to their own devices — everyone, it seems, in this stretch of land between national forests, is unhappy with the circumstances, and they each have a different idea for how to solve it.

Some gave up on the sheriff’s office a long time ago.

“When we called 911 even before they stopped patrolling, they’d say ‘Sorry, we can’t make it, handle it yourself,’ ” said Catherine Gasper of the tiny town of Mineral. “That’s not what someone wants to hear when you’re getting beat up. But most people are armed up here, so we don’t worry too much.”

The decision to end daytime patrols — which generated sensational headlines and coverage from tabloids in New York City and London for a county whose entire population could fit inside Levi’s Stadium — was rooted in twin problems plaguing law enforcement across California and the country: There aren’t enough qualified new recruits to fill open positions, and a small, rural sheriff’s department like the one in Tehama County doesn’t pay its deputies enough to keep them long.

The state, meanwhile, isn’t making it any easier to hire police officers — particularly those who leave larger departments with shoddy disciplinary or criminal records and find employment at smaller organizations. New laws have raised the minimum hiring age of law enforcement officers to 21 and require the community college system to create a “modern policing” degree program by 2025, laying the groundwork for a statewide officer education minimum.

In Tehama County, tensions had been building for months, if not years. Hencratt told the Red Bluff Daily News in February that other law enforcement departments were treating his office like a “supermarket of employees.”

“When (the) Redding Police Department says, ‘You know what chief, we’re down officers,’ ‘Well go down to Tehama County, go down the officer aisle and pick some,’ and that’s what they do. They’re cherry picking our people,” Hencratt told the newspaper.

Tehama County usually makes its hires from newly graduated applicants, said Tehama County Administrator Gabriel Hydrick. Since the county pays so poorly — about 22% below market rate, according to a county-commissioned compensation study from August — the new recruits don’t stay long. The police department in the county seat of Red Bluff pays better, and law enforcement in the nearby city of Redding and surrounding Shasta County both offer higher salaries and hiring bonuses of several thousand dollars.

The system operated well for decades: Sheriff’s deputies left for higher-paying jobs, and their roles were filled by new recruits. But the labor market is tight and policing isn’t what it once was.

Scores of incidents filmed on cell phones across the country have revealed the casual brutality of so-called bad apple cops, which legislators and civil liberties advocates argue drives potentially qualified applicants away from policing. Applications for policing are down, according to the Commission on Police Officer Standards and Training. Fewer applicants means smaller graduating classes. Their absences show up first in places like Tehama County.

Since 2012, the Commission on Police Officer Standards and Training, or POST, has certified on average about 3,200 officers each year. A basic certificate means that the applicant passed both the POST academy and a field training program, then completed a probationary period at the agency that employs them.  The entire process takes about two years.

“I would agree that it’s harder to be a police officer now than (in years past),” said Hydrick, the county administrator. “There’s a lot of disincentives to being an officer. The culture isn’t behind you anymore. We have more laws about policing and being a police officer than other states.”

“We can keep throwing money at it, but if there’s a generation that’s not willing to work or apply for jobs, the money’s not going to fix that,” Hydrick said. “The younger generation wants to be gamers and YouTubers; maybe they cobble an income together from being an Uber driver.

One of the architects of California’s push for tougher regulations on police and policing is Assemblymember Reggie Jones-Sawyer, a Los Angeles Democrat and chair of the Assembly Public Safety Committee. He said he doesn’t see a conflict between police hiring problems and the state’s stronger hand in hiring officers and the practice of policing.

“It’s almost like, if you’re saying the regulations are too stringent, you’re saying we can’t get people who are not racist, who do not want to brutalize people of color,” Jones-Sawyer said. “We’re not the ones making police officers look bad. It’s the bad police officers who are discouraging the good ones from applying.”

But Sawyer-Jones said it may be time to consider having the state send money to the smallest departments, like the one in Tehama County, to make sure they can afford to pay competitive rates.

“We probably do need to look at subsidizing smaller police departments so they can level the playing field,” he said.

The Tehama County Sheriff’s Office didn’t respond to dozens of emails and phone calls seeking comment. Hencratt, the sheriff whose term is expiring in January, did not return calls, and told a CalMatters reporter who approached his property that a press release would be the extent of his comments.

“Over the past decade, police lobbying organizations have said that any measure that increases transparency or accountability for officers will either increase crime or make people not want to be police,” said Peter Bibring, senior counsel at the American Civil Liberties Union of Southern California.

“They said that about the measure to strengthen the ban on racial profiling in 2015, about the transparency over disciplinary records, changes to use of force law. So this is just, you know, the latest.”

But, Bibring said, those portents of doom haven’t come to pass. If law enforcement agencies are having trouble recruiting a new generation, he said, they should probably look to the misconduct within their own ranks.

Police departments nationwide are calling for more officers, but in the smallest offices covering the largest geographic areas, the situation is more dire. In Shasta County, north of Tehama County, the sheriff’s office closed one level of the jail and blamed a lack of deputies. Sacramento has had a police officer shortage since the Great Recession 15 years ago, and in Los Angeles, the police department has no staffing problem, and is instead requesting more helicopters.

It’s not like policing pays badly in California — sometimes the opposite. At the opposite end of the spectrum, a Beverly Hills assistant police chief earned $716,284 in total compensation in 2021, making him the highest-paid municipal employee in the state. But Tehama County is no Beverly Hills: The entire county drew less than one-half the revenue that Beverly HIlls did in the 2020-21 fiscal year, the latest year for which numbers were available

One recruiter who works with police departments said that law enforcement has been slow to change its recruiting practices, and that’s reflected in the smaller number of people joining the profession.

The issue isn’t just pay, Blonder said, citing research showing that the newest generation of recruits looks for work-life balance ahead of pure compensation. But policing’s issues also extend to intransigence among the old guard. His work to recruit new officers, Blonder said, is as much about convincing police brass to do the recruiting.

“Among command staff there’s this attitude that I shouldn’t have to do this,” Blonder said. “Ask 150 high school kids who wants to be a police officer — you won’t get one that will raise their hand. It’s not for me to say why that’s happened, but sometimes an industry needs a shakeup like that.”

That shakeup is happening in real time in Tehama County.

“People have expressed to me fear and concern based on the lack of the daytime sheriff’s office patrol,” said Tehama County District Attorney Matt Rogers. “Simply put, if they pick up the phone and dial 911, is someone going to come?”

Any Tehama County officials wishing for tax hikes to generate more county revenue watched those hopes fizzle in March 2020, when voters rejected the county’s 1-cent sales tax increase. And it didn’t just fail, it was crushed, 84% to 16%.

But in the meantime, all of those vacant positions “encumber,” or put a hold on, the salaries those positions would be paid. That, Hydrick said, amounts to about $3 million each year in unused money by the sheriff’s office, which then reverts to the county’s general fund.

In place of the absent deputies will be the California Highway Patrol, which has 14 officers for the 15-county region that encompasses Tehama County.

“Since Nov. 20, the CHP has received numerous requests for assistance (from residents) to calls in Tehama County that don’t include their usual duties,” California Highway Patrol spokesperson John Crouch said in an email.

Butte County Sheriff Kory Honea, whose county borders Tehama and whose office pays more, said background checks are as much an obstacle to making new hires as the recruiting process is.

“It’s a challenge to find people you would want to entrust with the authority to carry firearms,” said Honea, who is also president of the California State Sheriffs’ Association.

Honea said his office tries to focus on retaining the people they already have by offering free gym memberships and yoga classes.

“I would hope I’m never in a position in Butte County to make that decision (to end daytime patrols),” Honea said. “I would exhaust other options before I did that.”

For some longtime residents like Tehama County Supervisor Bill Moule, the end of daytime patrols is a return to the county’s past.

“I moved to this county in 1978, and the first question I asked was, ‘What kind of service do you have in the rural areas?’” Moule said. “The sheriff was kinda this big guy, been sheriff a long time. He looked at me and said, ‘Son, get yourself a shotgun and a dog.’