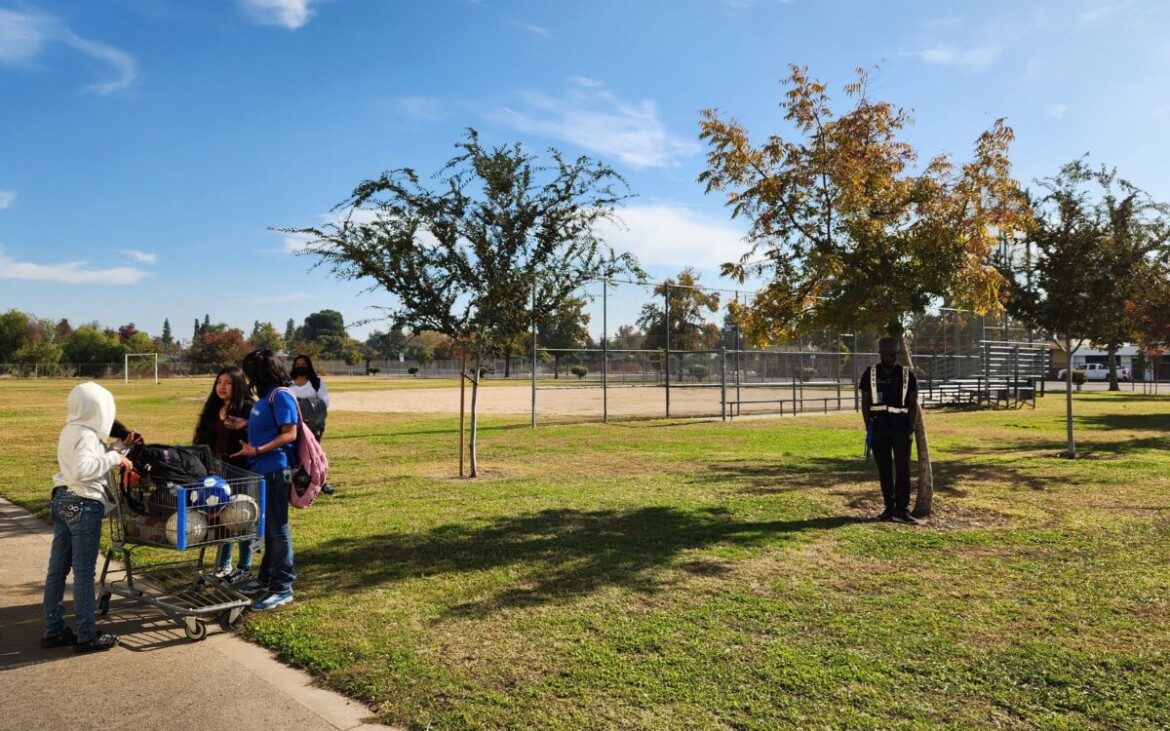 Students and a security guard at Tehipite Middle School stand around some of the trees planted to mitigate pollution.

At first glance, the 60 trees that border Tehipite Middle School in Fresno may not look like much. Only a few years old, they are still short and thin, some supported by wooden poles on each side.

But their potential is large, especially for the health of students and staff.

As the trees grow in the coming years, their planters hope to find they provide a barrier from what lies just over the fence: the tangle of busy and noisy freeways at the Highway 41 and 180 interchange.

Tehipite is nestled right up against the two highways, leaving the more than 500 students and employees vulnerable to vehicle pollution, which has been known to cause health problems, including cardiovascular disease and decreased lung function.

The trees were planted in 2020 in hopes that air quality measurements in the future will show they helped mitigate pollution that drifts into the school grounds. If that proves true, the practice could be used more widely at California schools and other freeway-adjacent places where people live and work.

The planting is jointly run by Tree Fresno, a nonprofit dedicated to increasing green space in the Central Valley, and Sonoma Technology, a private consulting firm that specializes in studying air quality. The Fresno Trees project is funded by the California Air Resources Board.

The impact of air pollution in the Central Valley

“It’s been known for a long time that there’s a lot of health disparities for anybody who lives next to a roadway,” said Steven Brown, a senior atmospheric scientist at Sonoma Tech, who is working on the project.

“We really see that in particular for people who live or work or go to school or have a lot of time being exposed to pollution next to roadways.”

In California, building new schools within 500 feet of freeways was banned in 2003, unless space is limited or the pollution can be diminished. But many students, especially in dense urban areas such as Los Angeles, still attend older schools right next to freeways. Some were there before the roads were built.

About 4.4 million students in the U.S. attend a school that lies within 500 feet of highways, truck routes and other roads with significant traffic, according to a 2017 investigation from the Center for Public Integrity and Reveal from the Center for Investigative Reporting. That’s nearly 8,000 public schools, or about 1 in every 11.

Brown said even people exposed to “major pollution events in utero” are affected as they grow. Children in particular are more sensitive to the effects of pollution on their lungs because they’re still growing.

The San Joaquin Valley is known for its poor air quality. The surrounding mountain ranges trap pollutants on the valley floor, leaving cities such as Fresno, Bakersfield and Visalia the most polluted in the nation, according to the American Lung Association. In 2022, the Fresno region ranked first in short-term particle pollution, and second in year-round particle pollution.

Vehicle exhaust is a major producer of PM 2.5, or particulate matter that is two and a half microns or less in width.

“When you breathe it in, it can stay and go deep into your lungs and then really impact your cells,” Brown said. “It can impact how different pieces of your lung are able to function.”

‘The trees are important’

At Tehipite Middle School, students coming out of their classrooms looked on as a car loudly peeled out one afternoon in the neighborhood that surrounds the other sides of the school, leaving a thick cloud of smoke drifting toward the campus and its border of young trees.

Researchers say vegetative barriers can act in two ways against pollution, such as car exhaust: directly blocking it, and also absorbing it. It’s possible that up to 50% of particulate matter could be reduced after the trees grow to maturity.

But studies have shown that it depends on how thick the vegetation is, how the wind blows and whether the barrier is working alongside a concrete sound barrier.

The trees planted at Tehipite are a mix of Aleppo pine, Deodar cedar, Chinese elm and other evergreen trees, according to Mona Cummings, the CEO of Tree Fresno. Trees whose leaves don’t fall are best used for barriers because they stay thick year-round.

Marilyn Lopez-Cuevas has been the principal at Tehipite Middle School for three years, and she grew up in the neighborhood. She says it’s how she understands the challenges her seventh and eighth graders face living in the community near downtown Fresno.

As Lopez-Cuevas rushed back onto the Tehipite campus one recent afternoon, she held bags of candy for students who reached their academic goals, and she was also thinking about a birthday party she was planning for a student who wouldn’t get any celebration at home.

Part of her job, she says, is finding small ways to connect with students that feel big, such as the candy and the birthday party. She sees the trees as just one more solution to the myriad of problems the community faces.

People in low socioeconomic neighborhoods tend to fare the worst when it comes to being exposed to pollution, many researchers have found.

In 2018, south central Fresno, where Tehipite is located, was selected to be monitored by the California Air Resources Board because of its proximity to major freeways and industrial plants.

Residents in the area are likely the most heavily burdened in the state by health and environmental challenges, a 2019 report from the San Joaquin Valley Air Pollution Control District indicated. People are more likely to be burdened by housing costs, to live in poverty or to be unemployed, according to census tract data, and less likely to have graduated from high school or college. Low birth weights, asthma and cardiovascular diseases are also higher than state averages.

As part of the project, the air quality at Tehipite was measured before the trees were planted. Average black carbon measurements were at a level that can cause an elevated cancer risk after a lifetime of exposure, according to the California Office of Environmental Health Hazard Assessment.

Lopez-Cuevas said she did not know for sure whether students at her school suffered from asthma or other lung conditions more often than other places.

“It’s hard to answer that question, because obviously it’s very scientific, I would have to have data,” she said. “But we know the impact that better air quality has on our lives. So having said that, you can infer that this has an impact on our community. The trees are important.”

Monitoring in the future

The planting at Tehipite cost about $41,000 for the 3-year-old, 15 gallon trees, including irrigation, Cummings said. Air quality monitoring is not included in that total.

Great strides have been made in the last decade in air pollution measuring technology, Brown said, making it easier to get a good idea whether projects such as these can really help mitigate pollution near roadways.

An ongoing pilot study at an elementary school in Oakland also seeks to understand which sort of vegetative barriers work best, using air quality monitoring, according to the U.S. Environmental Protection Agency.

Leaders on the Fresno project hope to come away with a similar understanding about whether pollution at Tehipite (and the several other sites they’ve planted) has been reduced.

The project gets funded in increments, Brown said, when money is available from the California Air Resources Board. There is not yet funding to return to Tehipite to measure air quality after the trees have grown.

“However, it will take one to five years for the trees to grow sufficiently to have a measured impact,” Brown said, “and we continue to work with CARB to secure funding for future air monitoring, so we are hopeful that funding will be in place in future years.”