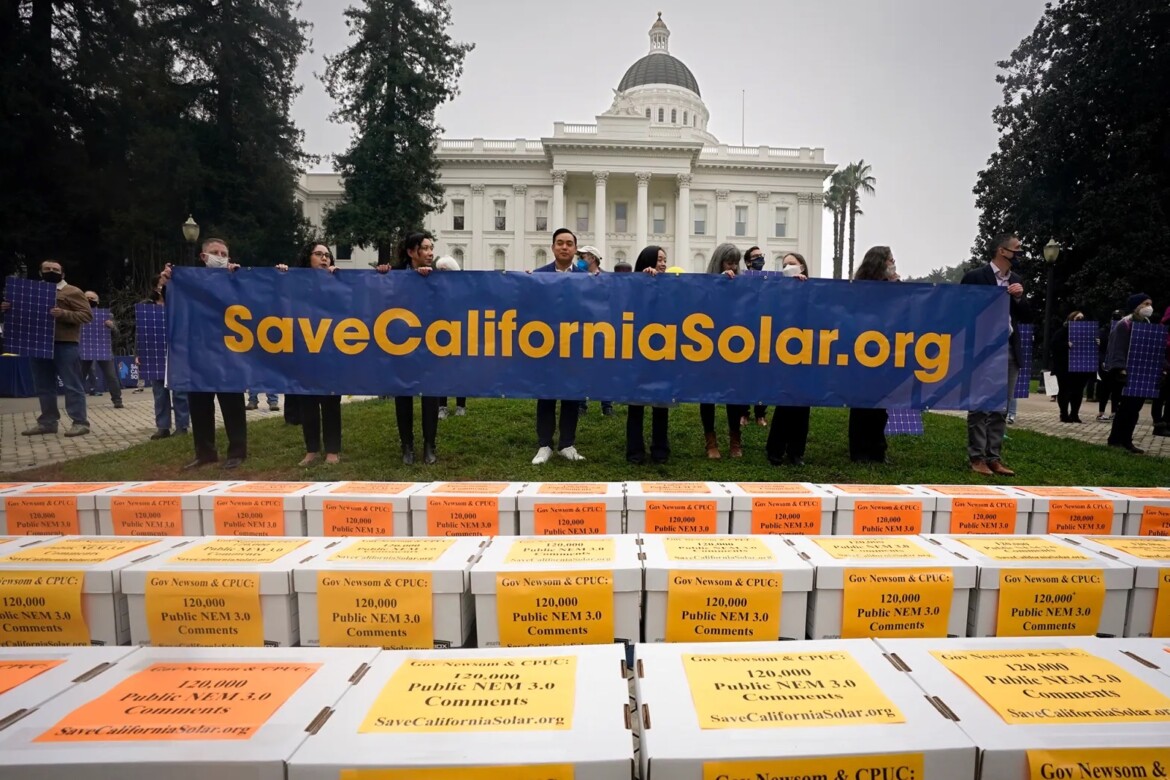 Boxes of petitions against proposed reforms that solar energy advocates claim would handicap the rooftop solar market are displayed before being taken to the governor's office during a rally at the Capitol in Sacramento on Dec. 8, 2021. Photo by Rich Pedroncelli, AP Photo

Both the power companies and the solar industry criticized the new rules that outline details of the financial  incentives to encourage people to build rooftop solar. Utilities did not get all the concessions they hoped for to lower bills for non-solar customers. And solar developers say the rules will discourage people from installing solar panels.

A victory for the solar industry came earlier this year, when the commission dropped an unpopular plan to charge homeowners an 8% per kilowatt-hour tax for new solar systems.

In remarks before the vote, commissioners acknowledged how divisive the matter has been. Commissioner John Reynolds said the decision was a “heavy one,” saying “nothing in energy policy is black and white, and nothing in this decision has been.”

Commissioner Clifford Rechtschaffen said the agency faced “competing and challenging priorities.” He called it a “responsible and forward-looking decision.”

The new regulations will:

California’s original rules, called Net Metering, were implemented in 1995. They established a framework for utilities to buy excess solar energy from homeowners and supplement power to the grid.

The overhaul comes as California needs to lean more heavily on renewable energy to meet state targets to produce zero-carbon electricity by 2045 and end use of fossil fuels.

About 1.5 million rooftop solar systems are installed on California’s houses, schools and small businesses. About 14% of California’s total electricity comes from large-scale solar projects; another 10% of the state’s power comes from rooftop residential solar.

Solar companies and environmental groups say the policy could undermine the state’s booming solar industry by raising the costs of operating panels on homes and small businesses. They say that in states where similar rate shifts have been adopted, solar system installation has plummeted.

“The CPUC’s final proposal is a loser for California on many levels,” she said in a statement. “For the solar industry, it will result in business closures and the loss of green jobs. For middle class and working class neighborhoods where solar is growing fastest, it puts clean energy further out of reach.”

“Just as more middle and lower-income Californians are putting solar panels on their rooftops, the new rules adopted by the CPUC today threaten to slow the growth of clean energy across the state,” he said.

The years-long fight was played out across social media and opinion pages. The complex process of revising the rules elicited tens of thousands of public comments and was, at one point, arbitrated by Gov. Gavin Newsom.

Today’s meeting began with three hours of lively public comment. Callers to the virtual meeting gave the five commissioners an earful, with the vast majority asking the panel to vote no.

Some callers made the point that the provision to nudge consumers to install solar systems with batteries will have the unintended consequence of quashing new solar systems because the cost of storage systems is beyond the financial reach of many homeowners. Only about 15% of current rooftop systems currently have storage, the commission said.

Many of the arguments on either side focus on fairness. Utility companies say demand for rooftop solar is strong enough in California that the industry doesn’t need more help. They say the retail rate they pay to solar customers for their excess power is too high and doesn’t reflect the value of their power, which is produced during daytime hours.

Because residents and businesses with solar panels generally have smaller energy bills, they contribute less to a utility company’s fixed costs, such as transmission and distribution networks, which are passed on to ratepayers. As a result, non-solar residents, including low-income residents and renters, carry more of the cost burden.

“This final decision was a missed opportunity that will prolong the harm to low-income Californians and renters for decades to come,” said Kathy Fairbanks, spokesperson for Affordable Clean Energy for All, a coalition that includes the state’s three largest utility companies.

“Low-income families are struggling to buy gas, put food on their table, and pay for everything, including utilities. Continuing to pay hundreds more a year to subsidize mostly wealthy Californians is unfair,” he said.

The solar rules increased bills for customers who do not have rooftop solar by $3.37 billion in 2021, growing to $4.5 billion so far this year, according to the CPUC’s Public Advocates Office.

Solar “customers should pay their fair share of grid, wildfire, and other related costs,” the public advocates office said in an analysis. “Customers with rooftop solar depend on the … grid to use electricity when their rooftop solar systems are not generating electricity. The compensation that (solar) customers receive is greater than the value of the energy.”

Solar advocates dispute the commission’s cost shift equations, challenging the details and pointing out that such calculations fail to consider the benefits of rooftop solar, including the need to construct costly infrastructure such as power plants.

Advocates say the widespread adoption of rooftop systems provides a valuable service to both the grid and the battle against climate change. They call the commission’s new policy a “solar cliff.”

Rather than viewing the new policy as punishing the solar industry, Baker said the new direction highlights the success of solar adoption in California.

“They have succeeded, we won, it’s amazing,” Baker said in an interview. “We have outgrown the subsidies for a solar-only system and now it’s time to pivot to solar plus storage.”

The commission said the rules would save residents with solar-plus-battery systems about $130 on their monthly bills.

The CPUC is required under state law to update its net metering rules, which triggered a prolonged, complex and politically thorny process. The commission’s proposal earlier this year was attacked by both the solar industry and utilities as unfair and inadequate.

The changes take into account evolving consumer habits: Heavy power use has shifted to evenings, when people return home and plug in a myriad of electronic devices.

This demand shift is reflected in the price of power and the availability of solar energy. Solar power is abundant during the day and the cost of electricity is about 5 cents per kilowatt-hour. In the evening, when the sun goes down and demand soars, the price for power can increase more than 20-fold, officials say.

The commission’s decision to reduce the amount utilities pay for excess power is driven by a revised cost calculator. The lower rates paid to rooftop solar owners take into account the real value of the power, the commission said, which is produced during the day when electricity is cheaper.

The program had the right intentions when it was established in 1995, Baker said, encouraging adoption of rooftop solar and compensating those residents with a retail rate for power they provided during the day, when the grid carried its heaviest load.

“At the time that was being done it was fair and equitable,” Baker said, but in ensuing years costs to install solar have dropped dramatically.

Solar and other sources of renewable energy are gradually supplanting power derived from coal and gas, which are fossil fuels that the state aims to banish from the grid by 2045.

While drought, wildfires, heatwaves and utility blackouts have prolonged the life of some natural gas-fired power plants, the state is inching toward that goal: On May 8, 100% of  California’s power grid was running on renewable energy for a few hours, a record.