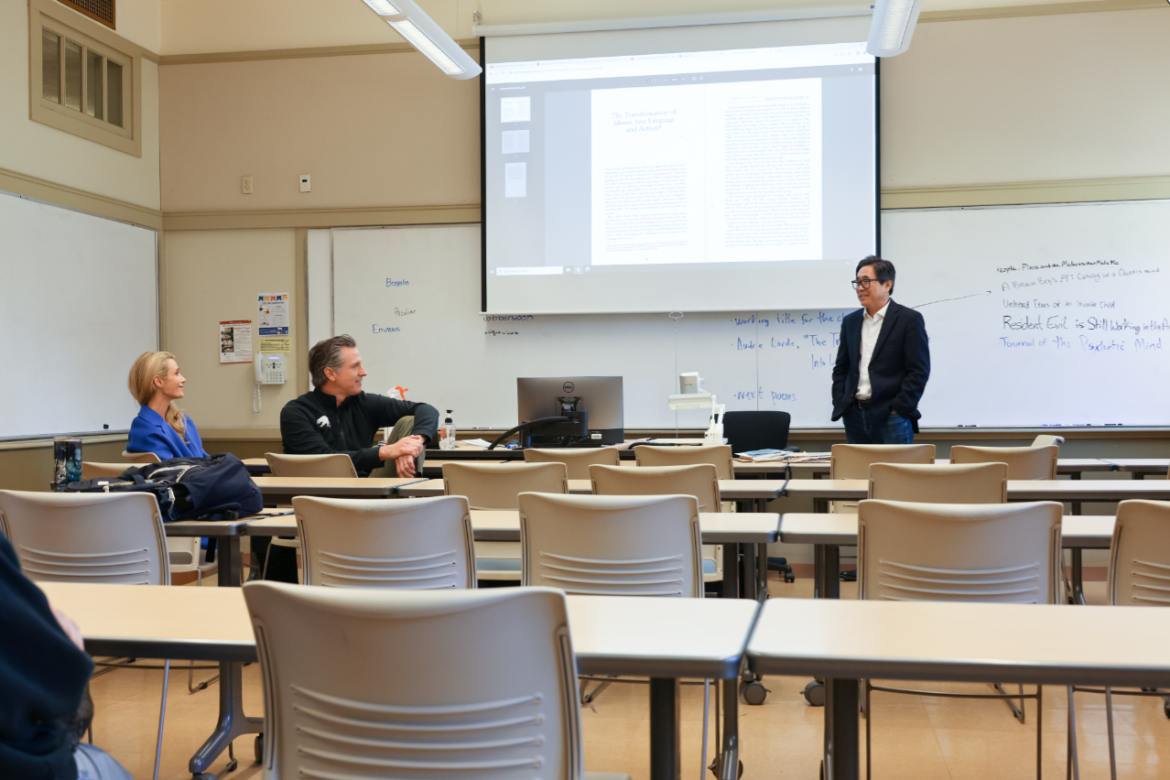 In late November, Gov. Gavin Newsom and first partner Jennifer Siebel Newsom walked into professor Lee Herrick’s class at Fresno City College, surprising him with the news that he was chosen as California’s 10th poet laureate.

“As a teacher, poet, and father, Lee writes movingly about his identity as a Californian and encourages others to reflect on what the state means to them,” Newsom said in a news release.

“Lee’s dedication to highlighting the diverse experiences of Californians, and making them so accessible through his poetry, makes him a perfect candidate for Poet Laureate.”

Herrick, the first Asian American to hold the title, has written three poetry books: “Scar and Flower,” “Gardening Secrets of the Dead” and “This Many Miles from Desire,” and is working on a fourth, along with a memoir.

Herrick has taught poetry at Fresno City College for 26 years and also teaches creative writing for the low-residency MFA program at the University of Nevada Reno at Lake Tahoe. He was Fresno’s poet laureate from 2015-2017 and lives in the city along with his wife and 17-year-old daughter.

Herrick’s two-year position is slated to be confirmed by the state Senate soon, and the role comes with a total stipend of $15,000 plus travel reimbursement, according to the California Arts Council.

Herrick, 52, spoke with EdSource about his plans for the position and how to get kids interested in poetry. The following interview has been edited for brevity and clarity. It was conducted by Ashleigh Panoo, who was a student in his poetry class in 2017 and would like to apologize for being late so much.

EdSource: When one thinks of Fresno, poetry may not be something that comes to mind. But you’re in good company: Several Fresno poets have gone on to become state or national poet laureates, such as Juan Felipe Herrera and Philip Levine. What’s the poetry scene like in Fresno?

Herrick: I always think of the poetry community in Fresno sort of like the Seattle music scene might have been in the late ’80s and early ’90s, or the Nashville music scene, where there are so many creative artists writing that it’s hard not to be inspired by and influenced by them.

I think there’s a hard-working, gritty, often immigrant or refugee-fueled spirit in the poetry. That might come from the natural landscape of the heat and the farms, as much as the poets who have inspired us and continue to inspire us. There’s a whole slew of Fresno poets writing here currently who are shaping American poetry: Mai Der Vang, Anthony Cody, Marisol Baca, Steven Sanchez, Joseph Rios, David Campos, Brynn Saito, Sarah Borjas, I Adeficha.  It’s a special poetry community. And I wouldn’t want to be a poet anywhere else.

EdSource: You’re the first Asian-American to hold the position of California poet laureate. Would you speak a little about your background and growing up, and what this means to you?

Herrick: One of the major parts of my life, and probably my politics, is being an Asian American person raised by a white family. I was born in Daejeon, South Korea, sometime in late 1970. I was adopted at 10 months of age by a white couple who were living in Danville, California, at the time, in the East Bay. They had a daughter already, my sister, who’s a little bit older, (and) she’s white also.

On one hand, I was raised in a very loving home, surrounded by educators and books, and encouraged. On the other hand, race was not something that I could really talk about or learn about in my family. So as I got older, you know, into maybe high school, and college, a lot of those emotions surrounding identity, race differences, racism, started to come to the surface. I played soccer all through high school and college, but as far as academics go and anything creative or intellectual, poetry was the place where I was able to put a lot of those questions and doubts and anger and hurt about my adoption, and about the racism I would experience regularly.

I began to learn about my Korean American culture, or Korean adoptee culture, probably in college. I started to read some great books and had great professors who showed me books and gave me opportunities to learn. That really changed my life.

It’s an incredible honor to be the first Asian American California poet laureate. It’s very humbling, and I don’t take it for granted. California is an incredibly diverse state, needless to say, and on the one hand, sometimes I wish I weren’t the first, but I certainly hope I won’t be the last.

EdSource: If a parent or teacher wanted to introduce poetry to their children, is there anything you would recommend?

Herrick: I would try to find poetry that is fun and speaks to the child’s sense of the world. There are poems about sports or superheroes or science. Let the young person explore on their own terms, (and) discover the music and the language. Poetry can be about anything that the child might be interested in or might discover a love for.

Petunia’s Place is a good children’s bookstore in Fresno, and the Academy of American Poets would be a great place for anyone to start with. (There is also a) National Young People’s Poet Laureate and (a) recent one is actually also from the Fresno-Clovis area. Her name is Margarita Engle. If there’s one person I would encourage people to start with, it would be her.

EdSource: So poet laureates are tasked with advocating and educating Californians about poetry. What are your goals for the position? What do you want to accomplish in two years?

Herrick: My platform is called Our California, and in all of the readings that I do around the state, I hope to invite a local social justice or civic engagement organization to say a few words at the event. I hope to bridge social justice and civic engagement organizations with poetry audiences. I’d like to visit as many cities and towns as possible.

So that’s one part of it. The other part of it is taking shape. Currently, I’m working with the executive director of the California Arts Council.

The plan is that they will be posted on the California Arts Council website. Further down the road, we hope to publish a print anthology of those poems as well.

EdSource: What are you reading right now?

These might be somewhat obscure, but you know one that comes to mind is Sean Singer’s book called “Today in the Taxi.” Another one is Sun Yung Shin. She has a new book called “The Wet Hex“ that I’m loving; Mai Der Vang’s “Yellow Rain.” I’m rereading bell hooks’ “All About Love.”

EdSource: What or who inspires you?

Herrick: One of the things that inspires me most is when people persevere through trauma, difficulty, setback or challenge. That can be physical, someone learning or being able to walk again, or it could be emotionally or with mental health, someone persevering through depression or grief.

I’m also very inspired by nature, just the natural world. The ocean or a lake or river or a creek. And music, also. I grew up listening to a lot of rap: Run DMC, Beastie Boys, Public Enemy. I love the lyricism and the wordplay and the energy of that early rap. I love classic rock like Led Zeppelin, which is probably my favorite band, Bob Marley, Janis Joplin, Jimi Hendrix. My wife and I went to see the Pixies in concert recently, and The Cure, Red Hot Chili Peppers, Pearl Jam.

And also stand-up comedy, which maybe is an out-of-left-field sort of thing, but I think laughter is necessary. I love Ali Wong, I love Sebastian Maniscalco, Richard Pryor, George Carlin.

The list is really too long, but my parents, I am inspired by and grateful for their support. My wife and daughter inspire me daily, my students, and by countless poets alive and dead, whose work fuels me and lives with me.

EdSource: How long have you been teaching, and is there anything you’ve learned along the way?

I started teaching in about 1995. So, what, almost 30 years? I’ve learned that collectively the students at Fresno City College are some of the most resilient, beautiful spirits I’ve had the privilege to know. I’ve learned that everyone has aspirations and sometimes those come into focus at different points in people’s lives. Sometimes they’re achieved at different times, for different reasons. But I’m convinced that education is the transformative piece to that equation.

I’ve had the good fortune to learn from and work alongside some remarkable educators. I do believe that writing and poetry and the arts are (not only) deeply important for any person’s education, but also their lives. I’ve learned that I love teaching time and time again.

The following is a poem from Herrick’s book “Gardening Secrets of the Dead,” titled “My California:”

graduate school and good pot. A group of four at a window
table in Carpinteria discuss the quality of wines in Napa Valley versus Lodi.

Here, in my California, the streets remember the Chicano
poet whose songs still bank off Fresno’s beer soaked gutters

and almond trees in partial blossom. Here, in my California,
we fish out long noodles from the pho with such accuracy

you’d know we’d done this before. In Fresno, the bullets
tire of themselves and begin to pray five times a day.

In Fresno, we hope for less of the police state and more of a state of grace.
In my California, you can watch the sun go down

like in your California, on the ledge of the pregnant
twenty-second century, the one with a bounty of peaches and grapes,

red onions and the good salsa, wine and chapchae.
Here, in my California, paperbacks are free,

farmer’s markets are twenty four hours a day and
always packed, the trees and water have no nails in them,

the priests eat well, the homeless eat well.
Here, in my California, everywhere is Chinatown,

No internment in the Valley.
Better history texts for the juniors.

In my California, free sounds and free touch.
Free questions, free answers.
Free songs from parents and poets, those hopeful bodies of light.