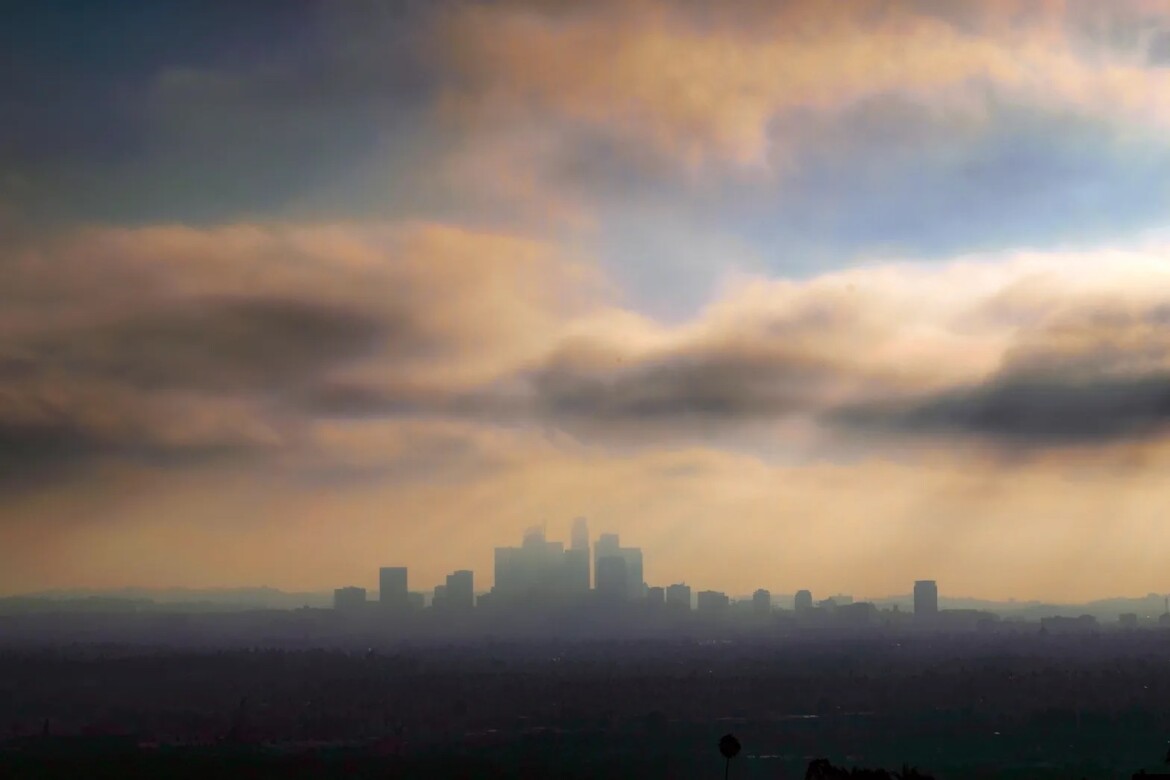 California’s air board on Thursday unanimously approved a sweeping state plan to battle climate change, creating a new blueprint for the next five years to cut carbon emissions, reduce reliance on fossil fuels and speed up the transition to renewable energy.

Called a scoping plan, the 297-page strategy could serve as a roadmap for other states and countries to follow, including a long list of proposed measures that, once adopted, would slash California’s greenhouse gases and clean up air pollution in the smoggiest state in the nation.

The California Air Resources Board’s plan sets an aggressive target of cutting greenhouse gases by 48% below 1990 levels by 2030, up from the 40% by 2030 required by state law. The ultimate goal is to cut use of oil 94% and become carbon neutral — which means the amount of carbon removed is greater than the carbon generated — by 2045.

“This is an extraordinary exercise and document, and it’s the most comprehensive, detailed plan for getting to net zero anywhere in the world,” said Air Resources Board Member Daniel Sperling, who also is director of the Institute of Transportation Studies at UC Davis.

“If we do it right, we will save thousands of lives, reduce economic inequality, and begin to repair the harm that low-income communities and Californians of color disproportionately suffer for the sake of oil companies’ profits,” said Dave Weiskopf, senior policy advisor with NextGen Policy, a progressive advocacy group. “If we do it wrong, we risk perpetuating those injustices for generations to come.”

The oil industry, however, says the plan is too ambitious in eliminating fossil fuels from California. “Under Newsom’s plan, California would become solely dependent on foreign oil,” said Rock Zierman, CEO of the California Independent Petroleum Association, an industry trade group.

Before the vote, 99 members of the public spoke at today’s eight-hour meeting. Most opposed the plan’s reliance on technologies to capture carbon emissions from oil refineries and other fossil fuel plants, which allows them to keep polluting low-income communities rather than shutting them down more quickly.

The air board held three hearings and multiple workshops over the past six months to obtain public comments before voting today. The plan, which is updated every five years, was first unveiled in May and has gone through one major revision that strengthened several strategies, including offshore wind development, climate-friendly housing construction, cleaner aviation fuels, reducing miles traveled and fast-tracking carbon removal projects.

Some board members today expressed lingering concerns over carbon capture, but said the emphasis should now be placed on how to deploy those projects so they do the least harm to low-income communities near the industries.

The measures outlined in the plan could transform Californians’ everyday lives. Here are six key ways that people could be affected in the years ahead — if the plan’s rules and other measures are enacted:

Californians will be driving electric cars

About 7.5 million electric cars are expected on the state roads by 2030. Currently, only 2.3% of the state’s 29 million cars are zero emission, or about 837,000, though electric car sales this year have grown, increasing to 17% of all new cars sold in the state.

In August, the Newsom administration’s air board already set a groundbreaking regulation that will ban sales of all new gas-powered cars by 2035. Car manufacturers will have to gradually electrify their fleet of new vehicles, beginning with 35% of 2026 models, then increasing to 68% in 2030 and 100% for 2035 models.

Owners who have gasoline-powered cars will be allowed to keep driving them. But the goal of the new rule is to drive the market and force automakers to produce electric vehicles at a faster pace. The new standards are among the most aggressive actions that state regulators have ever taken to clean up vehicle exhaust and improve poor air quality.

Air board officials expect that an abundance of electric vehicles will make them more affordable over time. More will enter the used car market, where most Californians buy their cars.

Still, questions linger about the costs of the cars and the need for more charging capacity.

Electric cars currently are more expensive than their fossil-fueled counterparts. But the air board says price drops plus savings on gas and maintenance could end up saving drivers about $3,200 over ten years for a 2026 car and $7,500 for a 2035 car.

Many Californians qualify for incentive programs that provide grants and rebates worth between $7,000 and $9,500 to help them with the purchases. But the programs often have long waiting lists and often run out of funding.

California will need about 1.2 million charging stations by 2030. That’s a 15-fold increase in just seven years. Currently, about 80,000 public chargers are operating statewide, with about another 17,000 on the way, according to state data.

Californians will be sharing the road with cleaner trucks

Trucks in California also will gradually be powered by electricity.

About 1.8 million trucks, delivery vans and other medium and heavy-duty trucks are driving state roads and highways. Their diesel exhaust has been linked to many health problems, including asthma and lung cancer.

The air board in September unveiled a proposal that would require new big rigs and other trucks to be zero-emissions within the next 18 years. Under the proposed rule, manufacturers wouldn’t be able to sell new gas and diesel-powered trucks that operate in California by 2040, instead relying on electric models. Large trucking companies would also need to gradually convert their existing fleets to zero-emission vehicles, buying more over time until all are zero emissions by 2042.

The proposal is vehemently opposed by the trucking industry, which says the technology is not yet ready for widespread use. The air board is expected to vote next spring.

For communities near ports with lots of diesel vehicles, such as the Los Angeles-Long Beach complex, air quality would improve. Air board officials say the proposal could save more than 5,000 California lives between 2024 and 2050.

The plan sets a goal for developers, businesses and local governments to construct at least 3 million climate-friendly homes by 2030 and 7 million by 2035, and install 6 million heat pumps by 2030.

Climate-friendly homes use more energy-efficient systems, such as replacing gas appliances with electric ones and adding solar rooftop panels. They also have better ventilation and battery storage systems, as well as updated electric circuits to support electric cars and appliances.

The plan designates heat pumps as the go-to device for developers constructing homes to comply with the state’s building efficiency standards. A heat pump converts thermal energy from outside, “making the cool space cooler and the warm space warmer,” according to the U.S. Department of Energy. They are a more efficient alternative to furnaces and air conditioners.

The goals are not mandatory, but the state will play an important role in providing financial incentives for homeowners and businesses.

The California Energy Commission offers zero- and no-interest loans and grants. Cities, counties, public schools, colleges, universities, hospitals and other facilities also qualify and can apply. The federal government offers loan programs, tax credits, grants and rebates to California residents. Commercial and residential buildings in California use 70% of the state’s electricity and account for 25% of the state’s greenhouse gas emissions, the second largest behind the transportation sector, according to state data.

The economy will grow, but jobs will change.

Fewer jobs will be held in some sectors: gas station workers, automobile parts dealers, mechanics and fossil fuel industries. On the other hand, the power industry and renewable energy sectors will grow.

California’s industrial sector, which includes cement plants, oil and gas producers and other manufacturers, is expected to shrink in the next two decades as the state electrifies. The sector employs about 1.2 million people and produced $324 billion in 2019, representing about 10% of the state’s economic output.

That’s why state leaders are prioritizing the need for a “just transition,” where the livelihoods of oil company employees and others are protected as the economy shifts. Creating new jobs for employees whose jobs are at risk is crucial. The transition to clean energy will result in employment opportunities in the renewable energy industry and power sectors. But many of these workers will need to be re-trained.

Californians will get more power from solar, wind

Electricity use is expected to soar as much as 68% by 2045. That means the state needs to make major investments in clean energy to ensure the power grid can handle the uptick in demand.

California’s offshore wind farms would be the first in the country constructed with floating platforms at a large scale — the turbines are hundreds of feet tall with blades that are bigger than a football field.

Five companies recently leased tracts in federal waters off California to build wind farms. They are at least six to seven years from operation, since the companies need many federal and state permits.

California also will need to rapidly build special port facilities and vessels to construct and transport the gigantic turbines.

The plan also requires a big push for solar. California currently has 39,458 gigawatts of solar, 14.2% of California’s total power mix. The plan’s goal is to increase solar power capacity fourfold.

Carbon will be captured and stored

Combined, 15% of all of the state’s targeted greenhouse gas cuts will come from carbon removal and capture processes.

Under a new law that Newsom prioritized in his climate package, the air board must create a new program that puts guardrails on carbon capture and storage projects while streamlining the permitting process. Newsom set an ambitious target for these technologies —  capturing and storing at least 20 million metric tons of carbon by 2030 and 100 million metric tons by 2045.

Once captured from smokestacks, the carbon could be transported to sites in the Central Valley. Air board staff say the valley is an ideal location for injecting carbon dioxide deep into rock formations because it has the capacity to store at least 17 billion tons.

Though controversial, air board staff say the technologies are a “necessary tool” to reduce emissions from industrial sectors, such as the cement industry, where no other alternatives may exist.

But environmental advocates say the plan relies too heavily on these projects, particularly those involving technologies that remove carbon dioxide from smokestacks of oil refineries and other polluting industries. It means operations at these facilities could continue past 2045 and it prolongs use of fossil fuels.

Environmentalists say it wouldn’t protect communities such as Wilmington and Richmond near industrial plants, where some of the state’s poorest residents and people of color live.