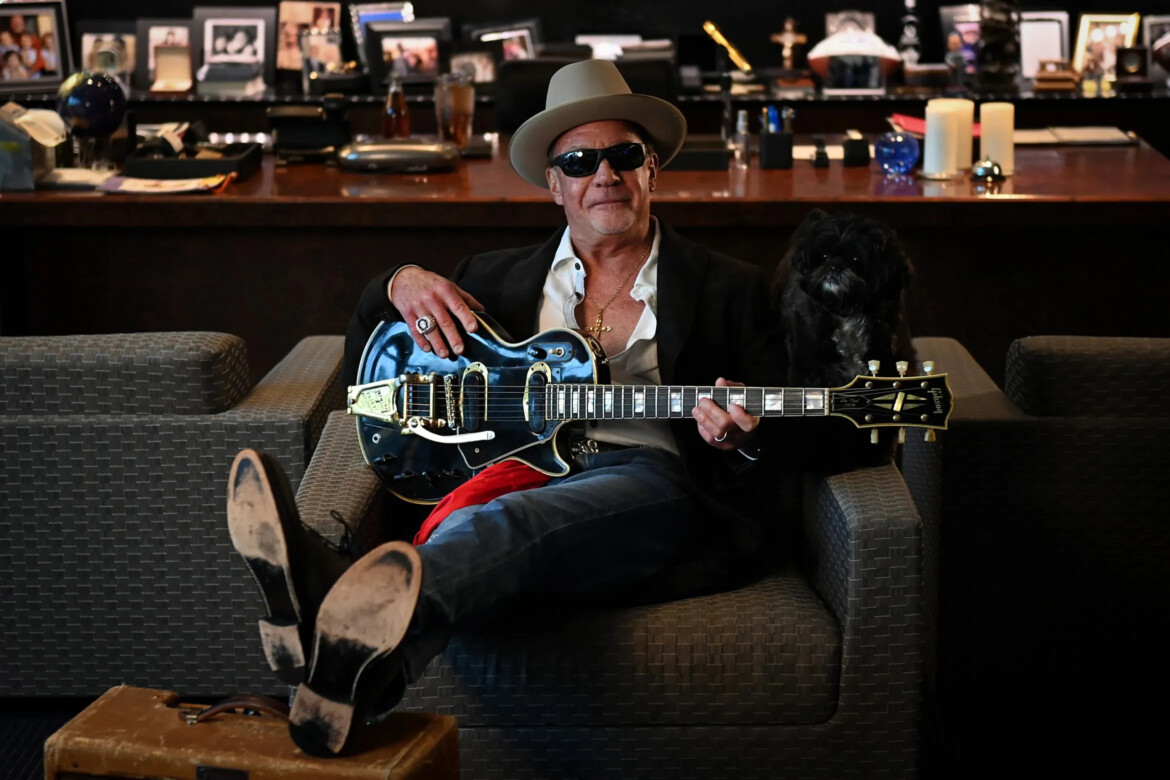 Freebie of the week-Music & memorabilia: Jim Irsay is best known as the very wealthy businessman who owns and runs the Indianapolis Colts pro football team, but his dabbling in music and popular culture are arguably more interesting. That is, of course, unless you are a Colts fan, in which case you probably hate the guy because the team is in the midst of an awful season and recently lost to the Dallas Cowboys by 35 points. But if Irsay has failed to surround himself with sufficiently talented football players this season, he’s succeeded over the years at surrounding himself with an impressive cache of music, art, history and literary memorabilia. It’s known as the Jim Irsay Collection (catchy title, eh?), and a big portion of it will be on display for one night this weekend in San Francisco, in an event that also includes a concert by Irsay and his band and a trio of A-list rock stars.

Irsay, a music geek, has a touring collection including iconic guitars once owned by Prince, Jerry Garcia, Eric Clapton, Janis Joplin, David Gilmour, Kurt Cobain and, perhaps most impressively, Bob Dylan — the electric Fender Stratocaster he plugged in when he played the 1965 Newport Folk Festival and horrified legions of folk music purists. Other items in the collection include lyric sheets compiled by Paul McCartney when he was working on “Hey Jude”; the drum set Ringo Starr used when the Beatles played on “The Ed Sullivan Show”; an original reward poster for John Wilkes Booth issued the morning after President Lincoln’s assassination; author Jack Kerouac’s famed 119-foot paper scroll on which he wrote “On the Road”; and more. Meanwhile, Irsay and his band will perform with guest stars including Ann Wilson, John Fogerty and Buddy Guy. The event runs 6-10 p.m. Saturday at the Bill Graham Civic Auditorium in San Francisco. Admission is free but tickets are required. Go to www.eventbrite.com and search for “Bill Irsay.”

Yet another freebie: The Bay Area annually serves up an impressive array of holiday shows ranging from sublime to silly to even spooky. In that last category is PlayGround’s self-described “twisted” seasonal show, “A Very Hitchcock Christmas,” running Saturday and Sunday in San Francisco. The show is a collection of short works by Bay Area playwrights inspired by Alfred Hitchcock movies. Included in the mix is Jeffrey Lo’s “Stranger on a Holiday Train” (inspired by “Strangers on a Train”); Marissa Skudlarek’s “The Sugarplum Trap” (inspired by “Notorious”); Cleavon Smith’s “The Story of Black Santa” (inspired by “Vertigo”); Alexis Standridge’s “A Window-ful Christmas” (inspired by “Rear Window”), Eteya Trinidad’s “Christmas at Manderley” (inspired by “Rebecca”); and Maury Zeff’s “North by North Pole” (inspired by “North by Northwest”). PlayGround is an outfit dedicated to developing new plays and providing a forum for emerging Bay Area playwrights to stage their works. “A Very Hitchcock Christmas” is the latest event for the group that, since founding 28 years ago, has showcased more than 300 playwrights and staged about 1,000 new short works. The show starts 7 p.m. both nights at Potrero Stage, 1695 18th St., San Francisco, Admission is free but reservations are strongly recommended. The show will also be live-streamed and available on demand through New Year’s Day. Go to https://playground-sf.org/hitchcockchristmas.

New setting, same old appetite: Can you improve on one of theater’s more beloved and bizarro musical comedies that finds a meek flower shop worker developing a vicious, flesh-eating plant and still getting the girl at the end? How about setting it in San Francisco’s Chinatown? That’s what TheatreWorks Silicon Valley is doing with the 2022-23 season-opening holiday production of “Little Shop of Horrors.” The musical by Alan Menken and Howard Ashman, adapted from the cult-classic 1960 B-movie, is usually set in New York. But the TheatreWorks version, directed by Jeffrey Lo, moves the setting to Chinatown and, with a diverse cast, lightly addresses challenges faced by marginalized inhabitants of an ethnic community. Yet fear not, it’s still the same “Little Shop” we all know and love, with its dark humor and foot-stomping R&B/doo-wop/early-rock soundtrack. And the nasty plant is as irritable and hungry as ever. The production runs through Dec. 24 at the Lucie Stern Theatre, 1305 Middlefield Road, Palo Alto. Tickets are $35-$90. Go to www.theatreworks.org.

Singing in solidarity: The powerful Bay Area-based Eastern European women’s chorus Kitka – women who can easily make themselves sound like double that contingent – traditionally launches a “Wintersongs Tour” in our area around this time. This year, however, they are focusing on Ukrainian music in particular, both sacred and secular – in order to heighten our consciousness and raise needed funds for several organizations committed to addressing the humanitarian crises in that war-torn country fighting so valiantly to maintain its independence. The theme of this year’s program, “Shchedry Vechir,” is a Ukrainian phrase that translates to “a generous evening,” and the women of the chorus are exemplifying that spirit and hoping to provoke it in others. The tour begins at 8 p.m. Friday in St. Stephen’s Episcopal Church in Belvedere, stopping next at Trinity Episcopal Cathedral in Sacramento at 8 p.m. Saturday. Menlo Park’s St. Bede’s Episcopal Church is the site of the 4 p.m. Sunday concert, and other programs follow at 8 p.m. Dec. 16 and 17 in St. Paul’s Episcopal Church in Oakland and 4 p.m. Dec. 18 at the Old First Presbyterian Church in San Francisco. Find tickets, $25-$50, at kitka.org/events. And give a listen to an excerpt from last year’s tour stop at Freight & Salvage in Berkeley: https://youtu.be/sbulHS-5gCY

A welcome return: Kept out of a favored venue for three years due to the pandemic, the award-winning San Francisco Girls Chorus is back in full force in Davies Symphony Hall at 7 p.m. Monday, performing a commissioned world premiere piece from Susie Ibarra called “Dreaming Horizons” that will feature the composer herself on drums with fellow percussionists Andy Meyerson and Eric Whitmer. Chorus artistic director Valérie Sainte-Agathe leads a program that also includes excerpts from Ron Kean’s choral tribute to a civil-rights hero, “The Journey of Harriet Tubman,” which incorporates some traditional spirituals into the composer’s own work; and the “Fire” excerpt from Katerina Gimon’s “The Elements,” which utilizes overtone and nasal singing as well as body percussion and improvisation. In honor of its 100th anniversary, the beloved Ukrainian “Carol of the Bells” is on the program, with verses sung in both Ukrainian and English; and the evening will conclude with an audience singalong of holiday favorites. Tickets, $30-$65, are available at cityboxoffice.com and 415-392-4400.