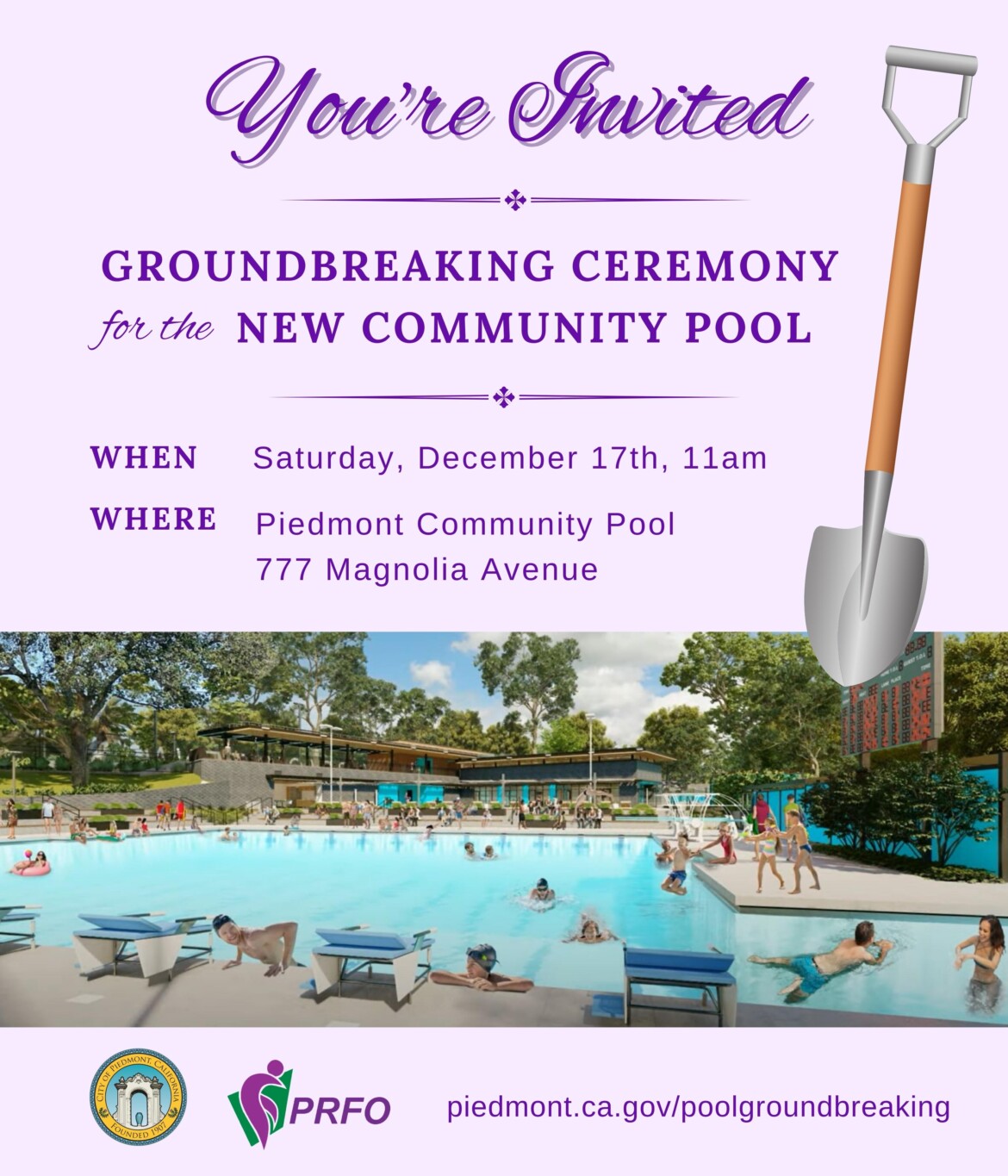 From a joint city and PRFO press release on Dec. 13:

The City of Piedmont and the Piedmont Recreational Facilities Organization (PRFO) invite community members to a groundbreaking ceremony for the new Piedmont Community Pool at 11 a.m. on Saturday, Dec. 17.

The event, which will take place on the pool site at 777 Magnolia Avenue, will celebrate the City Council’s recent award of contract and the imminent start of construction for Piedmont’s long awaited new aquatics facility.

Construction of the new pool is expected to begin in early 2023, and the new pool could open as soon as summer 2024.

Attendees will have an opportunity to stroll through the old pool one last time before it is demolished. City officials and PRFO leaders will be joined by pool users young and old to thank the many volunteers, community advocates, and generous donors who have worked tirelessly over the years to make this project a reality. Olympic swimmer Dana Vollmer will be on hand for greetings and photos — try on one of her five gold medals! Light refreshments will be served.

“This is a very exciting time for aquatic lovers and the entire Piedmont community,” said Steve Collins, President of PRFO. “Holding an inclusive event really represents what this effort is about. Not just for the water aspect, the Pool facility is also a perfect destination birthday parties, social events, team get-togethers and all other types of gatherings. It will be an essential part of Piedmonters lives for decades.”

To date, PRFO has raised over $1 million towards their fundraising goal of $2.1 million to complete the community pool as designed. PRFO initiated this capital campaign in partnership with the City in August 2022 to bridge a funding gap created by a sharp rise in construction costs since the passage of Measure UU in 2020, which threatened the project’s viability. This effort builds on the success of previous PRFO fundraising in support of Hampton Park and the Corey Reich Tennis Center.

The City of Piedmont, Piedmont City Council, and PRFO thank the many generous donors who have contributed to support the new pool, including the Piedmont Beautification Foundation and the Piedmont Education Foundation, and remain grateful to the entire community for their ongoing support for this project.

Get more information on the new pool HERE.

Get information on the PRFO capital campaign HERE.
.