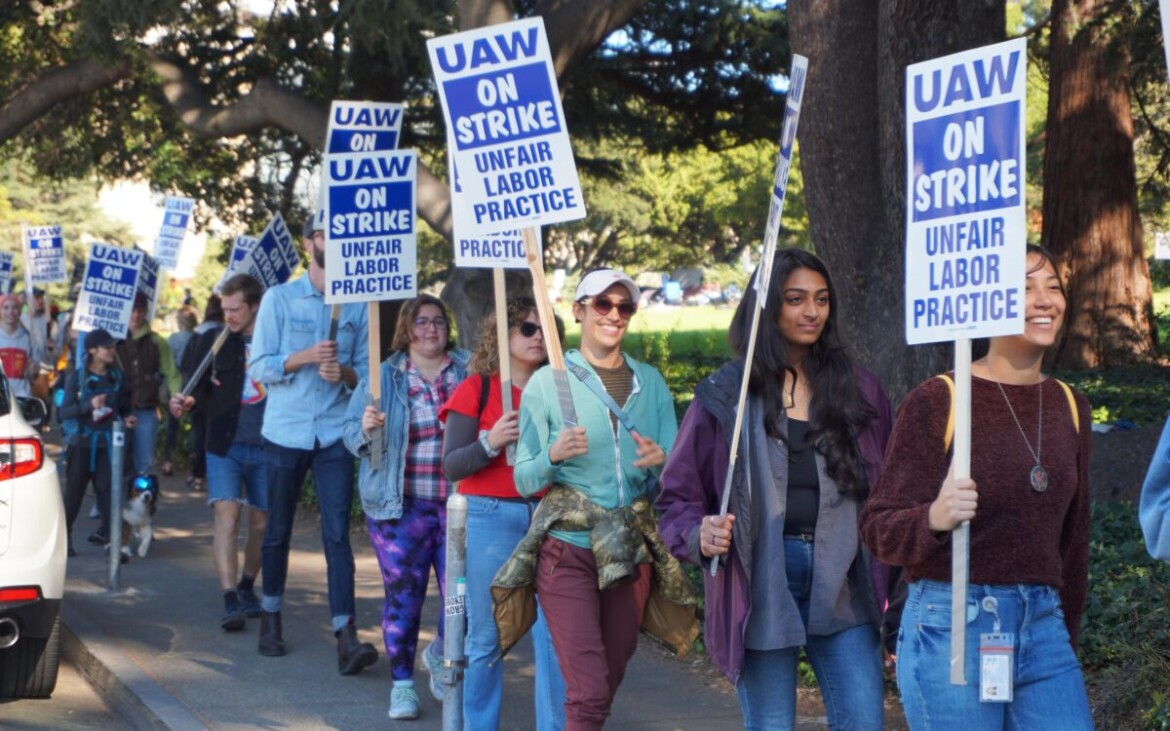 As the strike of nearly 48,000 University of California graduate student academic workers enters its third day Wednesday and many classes remain canceled, undergraduates appear divided in their reaction.

Some are worried about the impact on their grades and studies as the current term draws to a close and have continued attending any classes that haven’t been canceled. Others have skipped class and joined the picket line in solidarity with the strikers.

Students milling around midday at UC Davis seemed aware of the strike even if they were not participating.

At the busy Coffee House, third-year human development student Noura Sabbagh said, “I want to support the grad students. UC Davis might be good academically but not at supporting students.”

However, Sabbagh said she was unable to join the strikers’ call to skip all classes because she cannot miss classes at this point in the quarter. She said she’s sharing resources with other students to help them understand what the strike is about.

When asked how her classes have been affected, Sabbagh said, “My professors have not been supportive. I had an exam today, and they (first) said, ‘We’ll let you know if it’s postponed.’ Then it wasn’t.” She feels like the original consideration to postpone the test was about logistics rather than potentially showing support for striking graduate students.

At UC Berkeley on Tuesday, the loud cheers from the large crowd of students on strike resonated across the school’s main entrances and around the bell tower as they marched across campus. Dozens of students lingered around the crowds, either joining in the chants or taking photos of them.

Life California, a first-year undergraduate student, was at the rally at noon Tuesday at a time that she would typically have been in class. But her professor for that class was one of several who had canceled classes and instead encouraged students to attend the strike event.

“To me, striking with the union for fair working wages and a better contract is vital for the sustainability of the institution,” said California, who is double majoring in African-American studies and political science with a minor in global public health. “Specifically, this is for the graduate student instructors who are living paycheck to paycheck, the graduate student instructors who are Black, the ones who are disabled, who are genuinely most at risk of all that comes with not having fair living wages.”

But in other parts of campus, students continued about their day. Some students were doing schoolwork on their laptops as if it were a normal day. Inside the Martin Luther King Jr. Student Union building, where students can often be found studying for hours at a time, not a single table was vacant on the first two floors around noon Tuesday.

Many students across campus, whether at the picket line or not, were either wearing T-shirts or carrying signs in support of the strike.

It is unclear how many classes on the Berkeley campus and others were either canceled or affected by the strike.

“We don’t have data points. All info is anecdotal,” said Janet Gilmore, UC Berkeley’s senior director of strategic communications. “We are hoping to have a better sense of the general observations by the end of the week.”

The UC system has insisted that their leaders have negotiated “in good faith” and have proposed the UC and union enter mediation to resolve several of the issues on the bargaining table.

UC President Michael V. Drake, speaking Wednesday during a meeting of the system’s board of regents, reiterated UC’s position that it continues to negotiate in good faith and considers its offers “generous and fair.”

“We offer this kind of support not only because it is the right thing to do, but because we want to continue to attract and retain the top students from across California and around the world to our graduate programs. We’re committed to listening to the union carefully with an open mind and a genuine willingness to compromise, and I’m confident that we can achieve a fair and equitable contract soon. I look forward to it.”

First-year physics doctoral student Hadley Santana Queiroz was one of the students on strike Tuesday. Her department pays an additional amount above base salary that not all departments at UC Berkeley receive, but “it’s still barely enough to live in the area,” said Santa Queiroz, who added that she spends more than half of her earnings on rent alone.

In addition to the demands for higher pay, Santana Queiroz is also on strike for stronger mediation procedures for students.

Solan Castro, a first-year undergraduate student, was also at the picket line instead of attending class. Even with upcoming finals, he’s not worried about how the strike might affect his grades.

“A lot of professors have opened up more office hours, also in solidarity with the graduate student instructors,” said Castro, who is studying both public health and molecular cell biology.

As Castro took a break from the picket line, he shared that he recently learned about a class on campus that some students had failed at least three times. Those students were finally able to pass the class once a graduate student instructor stepped in and offered additional office hours for students who needed extra support.

Fifth-year history major Carlos Martinez also supports the workers on strike. “I like what they’re doing, I understand why it’s a good thing.” He expressed regret that he did not join the protest at the UC Davis campus, adding: “It’s good that people are stepping up to advocate for their rights. Props to them.

“I went to class today,” Martinez continued, “because I myself am getting to the end. I don’t have room to slip up.”

A common thread among many of the students interviewed by EdSource was the wish to return to the classroom and continue working.

“I wouldn’t be doing this if I didn’t love my program,” said Santana Queiroz. “I hope that this strike shows we wouldn’t be here if we didn’t genuinely care about this place and care about each other.”