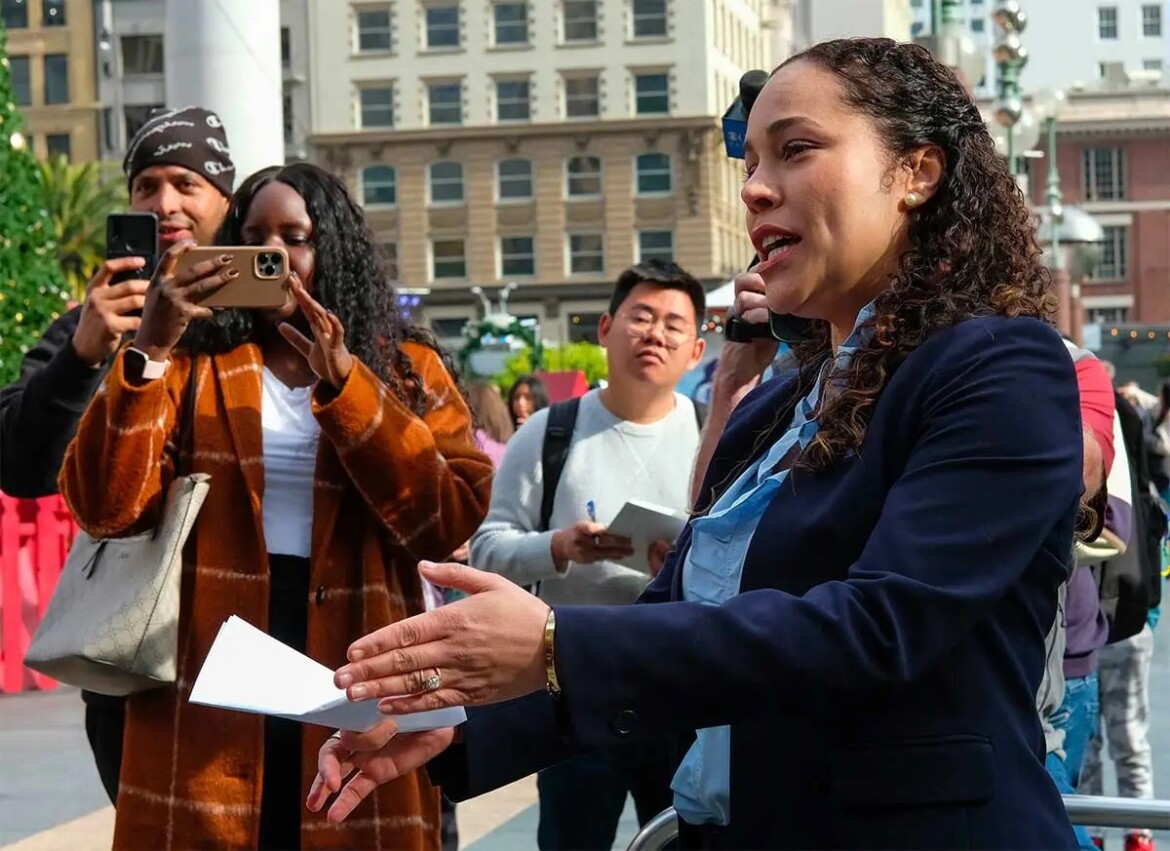 San Francisco Mayor London Breed joins a flock of city and business leaders to launch a strategic plan to bring Union Square back to life on Nov. 22, 2022. Long a hub for commerce and tourism, the square has fallen on tough times amid the COVID-19 pandemic. (Photo by Olivia Wynkoop/Bay City News)

A slew of San Francisco officials and business leaders toured around Union Square on Tuesday after releasing a strategic plan to restore the former downtown shopping destination into a bustling hub once again.

The nonprofit Union Square Alliance — a collective of business owners in the neighborhood’s 27-block radius — unveiled a five-pronged plan with a goal to revitalize Union Square as the city’s go-to shopping and eatery spot for residents and tourists alike.

In front of Macy’s dazzling display of holiday decorations, Marisa Rodriguez, executive director of the Union Square Alliance, said that the COVID-19 pandemic has made downtown businesses close up shop, or at the very least reconsider their profit margins.

“We must embrace change in order to remain successful as a downtown,” Rodriguez said.

Union Square’s hotel occupancy sits at 66 percent, compared to 82 percent three years ago, and its foot traffic is currently 72 percent below its levels recorded before the pandemic. Fewer visitors also means less dollars in sales tax revenue for the city.

But Union Square’s decades-long reputation of being a central tourist hub and an “economic engine” for the city means it can be brought to life once again, she said.

“Behind me, we see Macy’s great tree, the ice rink … wonderful activations that bring people back to our economic core. We want to see that throughout the year,” Rodriguez said. “We want our iconic plaza to be brimming with energy and people, and we also want our more intimate spaces like our alleyways and our arrival points to be welcoming as well.”

Cleaning up its image

One immediate priority for the alliance is combatting the district’s criticisms of being dirty and unsafe with more security around parking lots and transit stations, an increased community ambassador presence, and greater efforts to pressure wash streets and clean up trash.

Just last week, Mayor London Breed released a new safety plan for Union Square, not only in light of this year’s holiday shopping season, but also a year after a string of organized retail thefts that struck brick-and-mortar shops like Louis Vuitton and Neiman Marcus went viral.

“We know we still have challenges of a major city. But what we’re not doing downtown is, we’re not ignoring these challenges,” Breed said. “We’re taking them head-on. And because of our ambassadors, because of our police officers and all the great safety improvements we made, it’s making such a big difference.”

But the alliance is focused on not only making Union Square a more welcoming environment, it also wants to get creative to fill the district’s 150 vacant retail spaces. No longer are the days of multistory flagship and department stores.

“We know we still have challenges of a major city. But what we’re not doing downtown is, we’re not ignoring these challenges. We’re taking them head-on. …”

According to Union Square Alliance’s comprehensive report, Union Square was headed for a decline in shoppers even before the pandemic, as consumers nationwide were losing interest in in-person retail experiences.

To truly make Union Square into a unique, attractive and dynamic public space, city officials are planning to shift land-use regulations so multi-story spaces can become retail storefronts, restaurants and office spaces all at once.

“In the past, many of our restrictions around what can happen in these spaces made it difficult to do that,” Breed said. “Now is the time for those of you who have any interest in doing something different, doing something creative and fun.”

The alliance wants to cultivate a more “authentic vibe” to the square by programming public art displays and live performances by prominent cultural institutions, setting up everyday activities and food truck pop-ups with the city’s recreation and parks program and wholeheartedly embracing San Francisco’s unique offerings, like the iconic cable car rides.

The alliance also plans to work closely with public transportation agencies to ensure tourists and residents are welcomed downtown the moment they step foot off the BART train.

Following a stroll down Powell Street, city dignitaries met with BART representatives at Powell Street Station to celebrate the completion of its Powell Street Modernization Program.

“This project is a true reflection and indicator of BART’s commitment to being a world-class transit system,” said BART Board Director Bevan Dufty, who represents Powell Street Station. “We are excited to invite riders to come experience all of the upgrades firsthand.”

At the ceremony, Breed told New York to eat its heart out, because it doesn’t have a central subway station that is as beautiful and bright as this one.