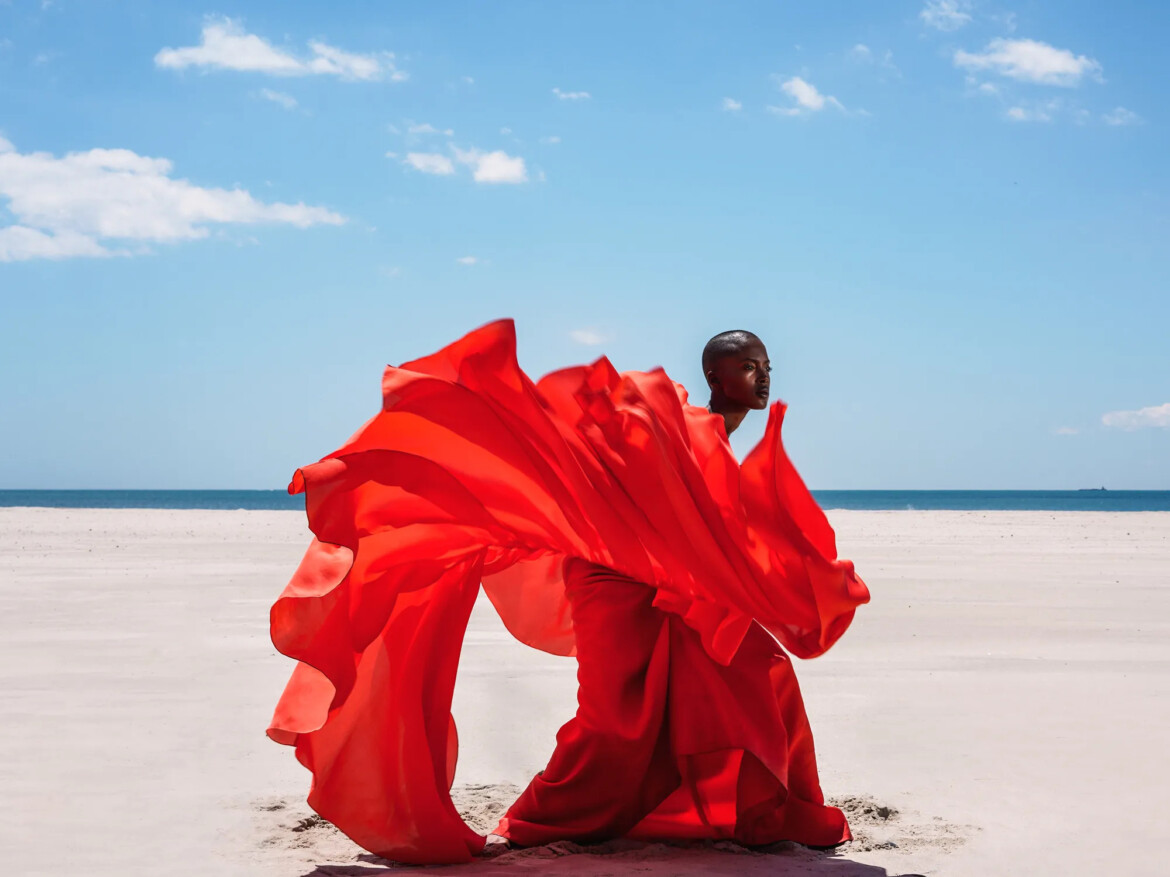 Self-taught photographer Dana Scruggs is known for “high contrast and intimate” images, such as “Fire on the Beach.” (Aperture, 2019/© Dana Scruggs)

That’s Lizzo in a black G-string and fishnet stockings, kneeling on a pink velvet sofa. Follow the image down folded legs to arched stilettos, and back up to her diamond-draped hands. Adrienne Raquel’s photograph of the musician’s famous form, pulled from Lizzo’s 2019 Playboy pictorial, is part of “The New Black Vanguard: Photography between Art and Fashion” at San Francisco’s Museum of the African Diaspora. The photo is so Lizzo – bold, beautiful and confident. Some viewers linger in appreciation like the photographer herself.

“In my eyes, Black women are truly exquisite subjects,” Raquel says. “I live for capturing our beauty, our attitude, delicacy, and regality.”

Raquel is among 15 photographers from around the world featured in this show curated by Antwaun Sargent and organized by Aperture, New York. We’ve seen these photographers’ work in lifestyle magazines, like Vogue, Allure and Rolling Stone, on social media and in high-end advertisements. Some of them have been working for years; others are newer to the field.

“The stunning images and the compelling narratives they construct vividly claim space on the world stage for a Black aesthetic,” White says. “This is a must-see exhibition.”

The Lizzo photo is one of the first you’ll see if you follow staff’s advice to start on the third floor and work your way down. The image is lush and textured – merging photography and art – and it pulls you into what show literature describes as “visual activism.” The tone of the show changes constantly as you move through the halls. By the time you reach Micaiah Carter’s Vogue.com image, “Adeline in Barrettes” on the second floor, you’re in a totally different mood.

Carter credits his father, a retired Air Force sergeant who grew up in the 1970s during the Black is Beautiful movement, as a source of inspiration for his art. In his narrative, Carter makes one of the many defining statements of “The New Black Vanguard.”

“Blackness can get pigeon-holed into a one-dimensional viewpoint,” Carter says, “but in reality, it is as diverse as the galaxies in the universe.”

Turns out masculinity and femininity get pigeon-holed too, and the tide is turning. Several photographers in the show clear out the cobwebs around gender ideals, depicting a journey that is both personal and public.

“I feel like masculinity is sort of a prison,” says photographer Quil Lemons, whose 2017 Glitterboy portrait series captures young Black men dusted with sparkles, looking into our eyes. “You can be masculine and gay, or feminine and straight. Now we have more space to play.”

More than photography, more than today

A favorite stop at MoAD is the screening room where visitors settle into the cool darkness to experience a video on a loop. One of the videos by director and photographer Rhea Dillon shares the experience, community and love that are part of washing and styling Black hair. “Beautiful people know that true beauty is natural…” the voice over says. As Dillon’s five-minute video ends, a new video by another artist starts, continuing the visual conversation.

Take your time in the screening room. Stay for a few loops. “The New Black Vanguard” is a show to move through a few times. Go through everything once, and then go back and study the images, the light, the subjects, the gazes, the fashion, and each artist’s unique vision and aesthetic. Look at the historic content in the glass cases – the 1970s image of Muhammad Ali on the cover of Life Magazine, shot by photography icon Gordon Parks. The 1972 image of Isaac Hayes and Helen Washington on the cover of Ebony, shot by Pulitzer Prize-winner Moneta Sleet Jr. The 2005 edition of “A Time Before Crack” by New York photojournalist Jamel Shabazz.

Read the artists’ stories. Dana Scruggs was the first Black photographer to shoot a cover for Rolling Stone in 2019. Daniel Obasi’s work protests the criminalization of homosexuality in his home of Nigeria. Stephen Tayo got into photography to document other people’s childhoods, as he didn’t have many photos from his own childhood. Ruth Ossai received her first camera from her mother when she was a teenager, and she documented her family in eastern Nigeria to show to her family in England.

“The beauty of photography,” she says, “is it starts a dialogue about who we are, where we come from, and where we are going.”

“The New Black Vanguard: Photography between Art and Fashion” runs through March 5, 2023 at Museum of the African Diaspora, 685 Mission St., San Francisco. The museum is open 11 a.m.-6 p.m. Wednesdays-Saturdays and 11 a.m.-5 p.m. Sundays. Tickets are $12 for general admission, $6 for seniors, students and educators, and free for youth under 12. For more information, visit https://www.moadsf.org/.