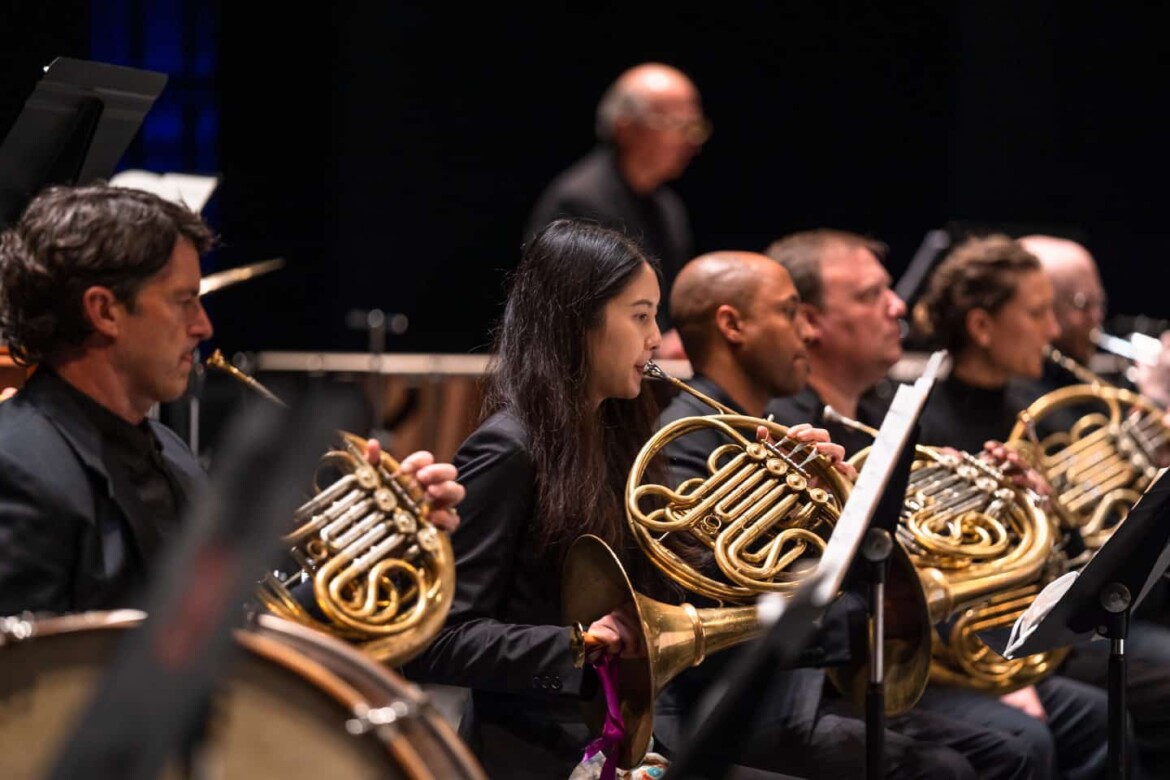 First and foremost, audience members with tickets or plans to attend Berkeley Symphony’s Dec. 4 chamber series concert, Holiday Blast, should steer themselves to the Piedmont Community Hall. Instead of holding the concert in the usual, smaller scale venue at the Piedmont Center for the Arts, a larger space was essential.

“This will be the first time we are having a brass quintet in the chamber series,” said the orchestra’s Executive Director René Mandel in a phone interview. “We’re doing it at the community hall because you need a bigger space than the arts center. We’d blast everybody’s ear off in that more intimate venue.”

No ears will be lost, and having twice the seating capacity will allow more people to enjoy the program that includes J.S. Bach’s My Spirit Be Joyful, G.F. Handel’s Music from the Royal Fireworks, the lively and lovely Suite from Monterregian Hills by Canadian composer Morley Calvert, and a selection of Duke Ellington songs adapted for brass quartet, among them, Cottontail Capers, Sophisticated Lady, It Don’t Mean a Thing if it Ain’t Got That Swing, and the classic Boy Meets Horn.

“This entire year, for so many musicians, has been incredibly busy. Now, post-covid, there is freedom to play,” says Mandel. That is especially true for brass and woodwind musicians whose return to the stage took longer than string players able to wear masks while performing. On that note alone, the symphony’s brass quintet concert represents a jubilant event. “All of our members are still diligent about testing if they feel any symptoms at all,” assures Mandel. “In some ways, it’s a celebration of coming out of the fog we’ve been in for two-plus years.”

Mandel says the program was largely selected by the brass players. Acting principal trumpeter Scott Macomber reviewed the repertoire with Mandel. “I had told him it must be festive, include jazz, and not necessarily be all holiday music but should be all music that is fun and upbeat.”

The concert in part honors Piedmont Post founder and editor Gray Cathrall. Mandel explains: “Because of him, the chamber series was added after he saw a concert in 2012 at the Piedmont Center for the Arts. We began talking about it and Gray just flew with it. We started in March of 2013 and it has just grown and grown since then. This is an opportunity to celebrate Gray with a loud, festive brass quintet and jazz, which is a special love of his.”

In addition to associations people have between the holiday season and Bach, who wrote so often for the church and held deep faith in God and Christianity, and Handel, whose Messiah is cherished and presented annually worldwide, Canadian influence on the concert arrives from American’s neighbor to the North.

“We went online and the Canadian Brass, a wonderful ensemble, have adaptations of Ellington’s music for brass that are great. What makes them great? It’s in the instrumentation and how they bounce the melody from instrument to instrument. They know how to take works originally written for a jazz band down to music for a quintet. Who holds the rhythm? Who plays the melody? If that’s done correctly, it just feels right. Plus, Ellington’s music is familiar and fit beautifully into a program which has in the second half an added celebratory feel.”

Calvert, a respected conductor, instructor of instrumentalists and choirs from 1950-72 in Montreal high schools and founder of the McGill University Concert Band and the Monteregian Music Camp, among other achievements, may be lesser known to some. His 1961 brass quintet suite is based on Canadian folk songs and the work showcases the unique, light, and lively features of brass instruments. For Mandel the entire program’s uplifting tones are the concert’s prevailing message and deliver in sound—at “full blast” and soft—the perfect launchpad for entering the holiday season.