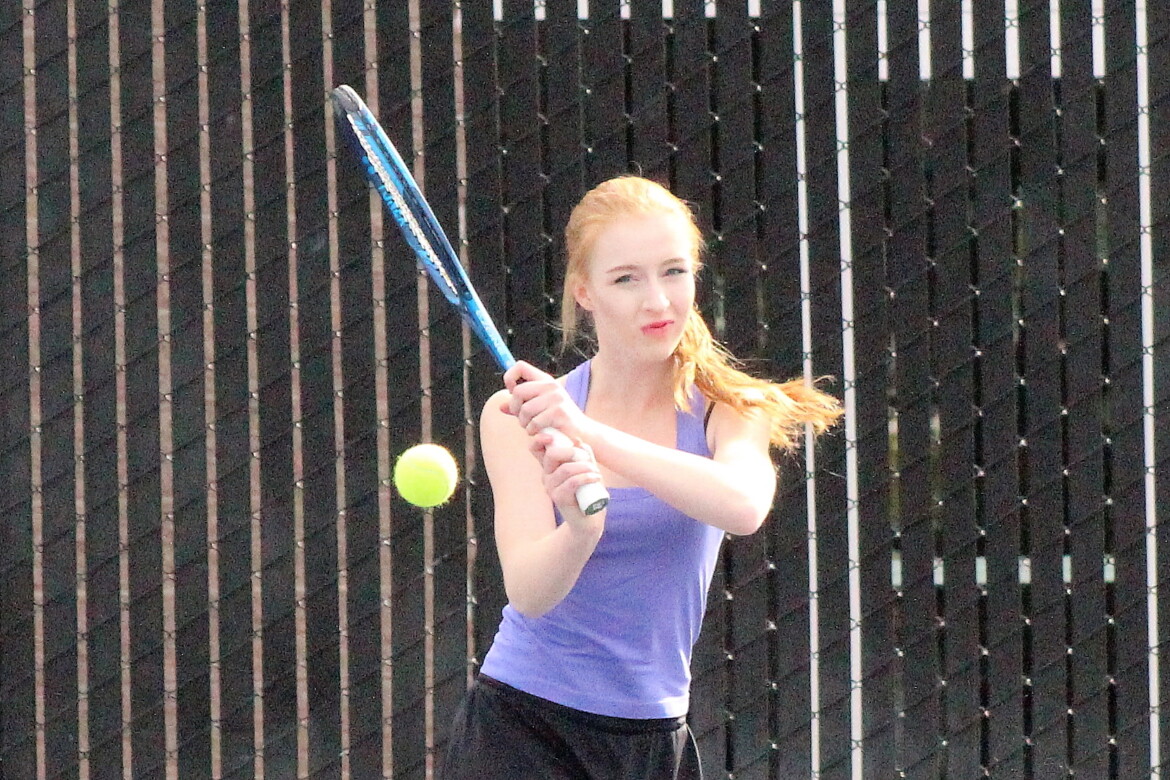 Piedmont's Tanya Kononova hits a backhand. The 16-year old is living with her mother in Piedmont. Her father is still living in Ukraine.

Tanya Kononova took a quick trip back to Ukraine near the end of March. She went out with a friend to shop. She thought they were safe from the fighting, which was far away from Odessa.

“People were saying the rocket had struck in a building and we were just laughing,” she said. “We came out and heard the rocket — it felt like it was right next to us.”

“It was three or four rockets and we were running and it was so stressful. That night I said to my mom, ‘We’re going to go right now.’ I was moving my bed from the window at 5 a.m. I didn’t want to die.”

Kononova and her mother Olga Charugina are now in Piedmont, living with her uncle, who moved here 20 years ago. The 16-year old is attending Piedmont High School and starring on the tennis team. She won the West Alameda County Conference Foothill Division individual championship on November 5, and finished fourth in the North Coast Section Division  2 singles championships November 14-15.

Her life has been completely upended by the Russian invasion of Ukraine.

The invasion is part of a longstanding claim by Russia that Ukraine is not a separate country. Ukraine declared independence from the then-Soviet Union in 1991, which dissolved later that year. However, the Russian Federation has meddled in Ukranian politics, fearing the latter would become part of the European Union and/or NATO. In 2014, Russian troops invaded the Crimean Peninsula, which had been part of Ukraine, and annexed the territory.

The new conflict began on February 24. Russian troops (along with some from Belarus, which is under the Russian sphere of influence) invaded Ukraine. Kononova and her family lived in Odessa, which is located in the southwest of the country, well away from the east where much of the fighting was taking place. But that doesn’t mean they weren’t affected.

“A day before, we were living our normal lives,” Kononova said. “I was really happy there. The next day, it all happened. I was in shock. I didn’t believe that and I still don’t believe that.”

On March 5, the family packed up and headed for Moldova, where Kononova, her mother and her grandparents stayed. It was almost a month later when Kononova and her mother returned to Odessa for three days to get their belongings.

Again, they couldn’t seem to get completely away from the fighting. After a couple of months, an administrative building in Moldova was attacked.

“I got really scared,” Kononova said. “We came to Bulgaria with my grandparents and they’re still there.”

Mother and daughter moved to Piedmont in August. Kononova is very practical about why she had to leave Ukraine.

“I cannot get an education there,” she said. “So I need to get into college here. I need to study here.”

She is hoping to play tennis in college in the United States. She had a superb high school career. She won every match against WACC competition in straight sets. The Highlanders made the NCS Division 2 team semifinals, and when they fell to second-seeded Branson 4-3 on November 12, Kononova lost just her second match of the entire high school season.

Kononova started playing tennis around 6 years old. She had been ill several times as a child and her mother decided to sign her up. It was one of many activities she participated in.

“(I played) piano, I was drawing, I was an athlete, I was running,” she said.

One thing she has liked about American sports is playing for a high school team. Players don’t compete for their schools in Ukraine.

“The friends I like the most are from my tennis team,” Kononova said. “We came through a lot this season.”

During a match at the WACC championships, Kononova demonstrated an overpowering forehand and backhand, as well as a strong serve and volley. She also worked on lobs during the match and showed an interesting service toss, seeming to flick the ball up backhanded for her serve.

“I have a problem, actually,” she said. “I cannot just toss the ball. It’s not stable, consistent. I think in my head I’m throwing it (with a toss) but instead I am throwing it like this (the backhanded flick). It’s not on purpose. It’s my problem.”

Sometimes, she’ll do an underhand serve on a second service.

“In Ukraine, we all do that,” Kononova said. “We do that for fun. When my second serve doesn’t work at all, I can do underhand.”

You might think that tennis is an escape from everything, but Kononova said that’s not quite true.

“When I play tennis and I get really aggressive, it’s making it even worse because I start thinking of all the bad things that happened,” she said. “It’s hard to get back into normal things.”

The biggest thing missing in her life is her father, Paul Kononova, who is still in Odessa. Due to the war, Ukraine won’t allow men under 60 to leave. She speaks with him often.

“I don’t believe that something is going to be worse than now and I don’t believe he will die, for example,” she said. “But I really worry about his mental (health) because he is alone there for almost a year and it’s so bad. Because I feel like I’m similar to him and I don’t know if I could handle this alone. All of my family is out of Ukraine and only my dad is there.”