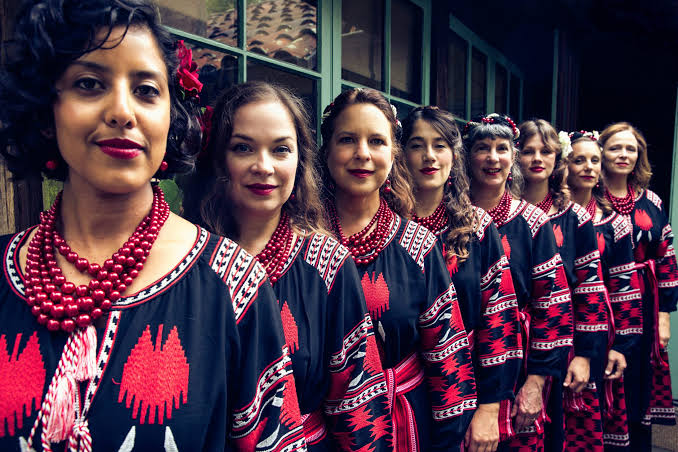 The women in Kitka bring their annual holiday concert to churches across Northern California in December. (Courtesy Vincent Louis Carrella)

For the singers of Kitka, the music of Ukraine isn’t new. The Bay Area’s nine-woman vocal ensemble has been steeped in the country’s musical traditions for years.

But that music has taken on special resonance this year, as the award-winning group prepares its annual “Wintersongs” holiday concert. Russia’s war on Ukraine, says Kitka Executive Director Shira Cion, has inspired a program that feels especially urgent right now.

Titled “Shchedy Vechir” – a common refrain from Ukrainian songs that translates to “A Generous Evening” – the concert features sacred and secular music the women of Kitka have mastered in multiple visits to the region. Works from Eastern European ethnic and spiritual traditions complete the program, scheduled for six performances running Dec. 9-18 at churches in Belvedere, Sacramento, Menlo Park, Oakland and San Francisco.

Cion says the concert is structured to mirror the way Ukrainians mark the holiday season.

“There are songs for blessings at the feast tables, songs for carolers who go from house to house and bestow blessings.”

It also reflects a close relationship developed over years. “Ukraine is a very special place for Kitka,” she said. “We traveled there in 2005 and 2009, and we met so many wonderful women there: singers who are keepers of those songs and traditions, and who have inspired us and become our mentors.”

Cion originally trained as an oboist and English horn player, but over the years, she says, “I veered from the traditional Western canon,” moving toward world music, Indian, gamelan and South African works. Vocal music became a specialty, inspired by leading composer-vocalists such as Joan La Barbara and Meredith Monk. From there, she says, “it was on to music of Bulgaria, Macedonia, Croatia, Armenia,” and other traditions. She joined Kitka in 1988 and became the group’s executive director in 1997.

Kitka’s roots date back to 1979, when a group of Bay Area singers came together and began collaborating. Since then, the award-winning ensemble has commissioned and premiered an impressive list of recordings and performances. “Winter Songs,” which the group has recorded and featured on numerous tours, remains one of its most admired projects; Cion is also proud of “The Rusalka Cycle,” launched in 2005. In 2009, the group toured the work to Ukraine, Poland and Germany.

In addition to this month’s holiday program, the women of Kitka are currently working on another special project: “Baba,” a new vocal-theater piece by Slovenian director, composer, and conductor Karmina Šilec. The group recently finished the work in a development residency at Berkeley Repertory Theatre; its premiere production is scheduled to open in February at San Francisco’s Z Space.

Yet for Cion and company, a primary focus over the last two years has been the disastrous war in Ukraine.

Many of the women they’ve collaborated with are now struggling under Russia’s relentless attacks on the country and, more recently, on Poland.

“It’s heartbreaking,” she said, adding that one of Kitka’s mentors, Ukrainian folk song master Inna Kovtun, was forced to flee the country. “She had to leave her husband in Ukraine – anyone who can fight has to stay behind,” she said. Kovtun is currently living in Oregon, and “we’re helping her start a new career here, offering Ukrainian folk workshops over Zoom, to a worldwide community.”

So if this year’s concert is a celebration for the holidays, it’s also a plea for a country under siege; the group hopes to raise awareness, as well as funds, for aid to Ukraine.

Making those contributions to Ukraine’s war relief will remain a significant part of Kitka’s work, and Cion says that’s how it should be.

“I think it gives our friends in Ukraine hope and confidence that Ukraine will prevail, and eventually be rebuilt,” she said. “Their resilience is deeply inspiring to us.”