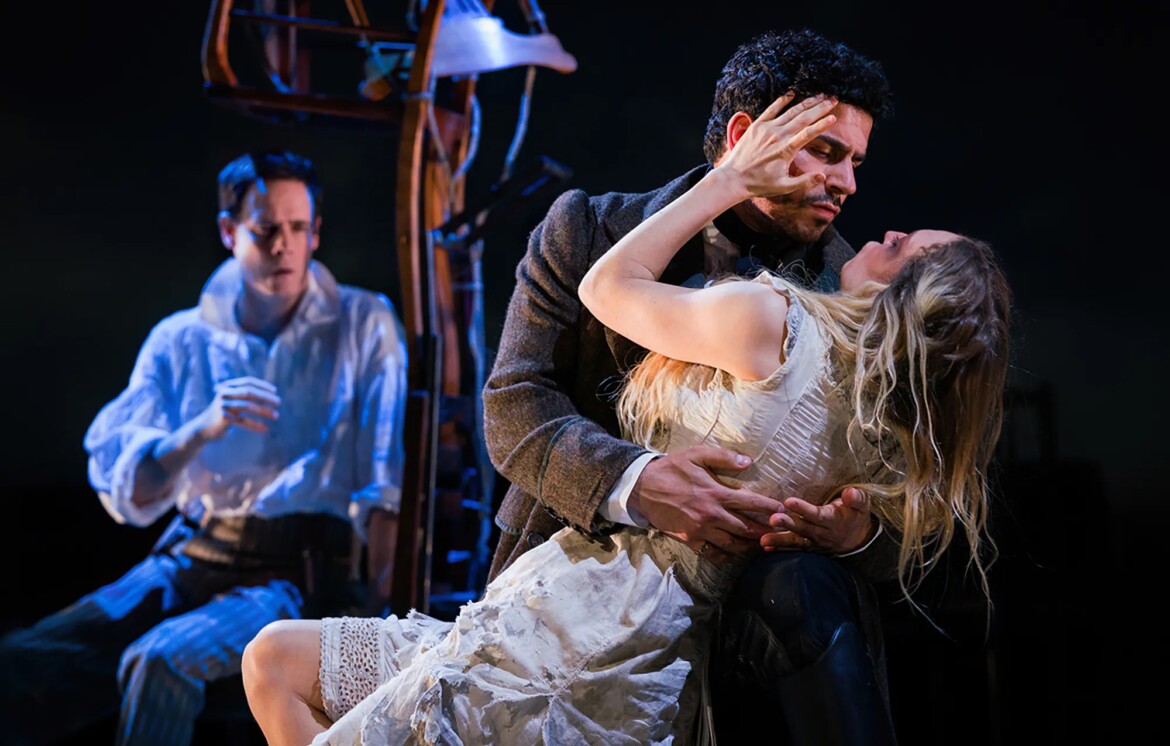 Berkeley Repertory Theatre's production of "Wuthering Heights," roughly based on the Emily Bronte novel, will run through Jan. 1. (Photo by Steve Tanner)

Is it a spark of genius or the height of literary effrontery that leads one author to delve into another’s masterpiece and recast it to produce his or her own work? We could put that question to novelist Barbara Kingsolver, whose “Demon Copperhead” (Harper, $32.50, 560 pages) grabbed Oprah’s blessing and rose to top spots on the national and Bay Area best-sellers lists within a couple of weeks of its mid-October release. Dubbed “an Appalachian David Copperfield” by the New York Times, “Copperhead” follows the trials and tribulations of an impoverished youth in rural Virginia who endures injustices in the foster care system and gets caught up in the OxyContin crisis afflicting his small county. But blessed with amazing resilience, he manages to pick himself up time after time, much as that Dickensian hero who thrilled readers of more than a century and a half ago also did.

We note that author Kingsolver lists “David Copperfield” on her website as one of her favorite books, so it’s safe to say she cobbled a bit from it out of admiration rather than one-upsmanship. But whatever her motivations, she is far from the only writer who has successfully mined a classic work of literature. The late John Updike, a prolific author whose “Rabbit” tetralogy snagged him Pulitzer Prizes for two out of the four novels, dove deep into Nathaniel Hawthorne’s “The Scarlet Letter” not once, but three separate times, devoting a single novel to each of the source book’s main characters. Updike himself wryly referred to his 1975 comic novel-in-diary-form “A Month of Sundays,” about a wayward minister banished to a desert retreat to seek spiritual renewal, as “Dimmesdale’s version,” acknowledging his debt to the Rev. Arthur Dimmesdale of Hawthorne’s imagination. He followed that up with a nod to Hawthorne’s Chillingworth in 1986’s “Roger’s Version” and capped off the trilogy with the 1988 epistolary work “S.,” whose protagonist, Sarah Worth, is a modern reincarnation of Hester Prynne.

As you would imagine, the works of William Shakespeare have set many a copycat to scribbling, as Jane Smiley did, with resounding success, in her Pulitzer Prize-winning “A Thousand Acres,” a 1986 novel that relocated King Lear and his three daughters to a 20th-century farm in Iowa. And that clever Ian McEwan, responding to an eight-author Shakespeare challenge from British publisher Hogarth Press, turned out a wacky take on “Hamlet” called “Nutshell” in 1986 that featured a “womb with a view” narrative from a fetus (“Here I am, hanging upside down in a woman . . .”) listening in as his mother Trudy and Uncle Claude plot to kill his father.

Jane Austen’s iconic “Pride and Prejudice” has tempted more than one author to play around with the plot. Sonia Kamal’s “Unmarriageable,” published by Ballantine Books in 2019, moved it to the modern day and another continent and bears the subtitle “Pride and Prejudice in Pakistan.” And Curtis Sittenfeld, who has famously reimagined bits of Laura Bush’s life in one novel (“American Wife”) and recast Hillary Clinton as an unmarried woman in another (“Rodham)”, updated Austen’s classic novel and moved it to her own hometown of Cincinnati, Ohio, in 2016’s hilarious “Eligible.”

It was Melville’s massive “Moby-Dick” (635 pages, 135 chapters plus an epilogue upon its 1851 publication), that inspired Kentucky author Sena Jeter Naslund’s 1999 novel “Ahab’s Wife,” which, clocking in at 666 pages and 157 chapters (plus an epilogue!) outstripped its predecessor, at least in weight. But it became a national best-seller, a New York Times book of the year and opened with a sentence even more intriguing than “Call me Ishmael,” to wit: “Captain Ahab was neither my first husband nor my last.”

It’s easy to see by now that we could ramble on and on with this topic, but let’s wrap it up with the contributions from Pennsylvania author Jon Clinch, whose specialty in borrowed inspiration seems to be taking secondary, already dead characters, and throwing them into live limelight. He has done it twice, with his 2007 debut novel “Finn,” which resuscitated the corpse of Huckleberry Finn’s father we encounter in the opening pages of Mark Twain’s novel and weaves a riveting tale about how he came to be such an abusive alcoholic. Clinch repeated the prequel feat in 2019 with “Marley: A Novel,” channeling Charles Dickens’ “A Christmas Carol” to explore the complex and fateful relationship between Ebenezer Scrooge and Jacob Marley. Both of Clinch’s books were showered with praise, and “Finn” was named best novel of the year by the Washington Post, the Chicago Tribune and the Christian Science Monitor.

Author alert: And speaking of Jane Smiley, we’re presuming she has relied solely on her own imagination for the most recent of her many novels, “A Dangerous Business” (Knopf, $28, 224 pages), which reaches the bookstores on Dec. 6. That’s the date she hits the book-tour trail, starting with a noon appearance at Olivia & Daisy in her own hometown of Carmel Valley. The new novel is set during the Gold Rush and is a murder mystery and adventure that follows two prostitutes and friends who are trying to find out why so many young girls are disappearing. Smiley’s subsequent appearances are at 7 p.m. Dec. 8 at Bookshop West Portal in San Francisco, 1 p.m. Dec. 10 at Book Passage in Corte Madera, 1 p.m. Dec.11 at River House Books in Carmel-by-the-Sea and 7 p.m. Jan. 18 at Bookshop Santa Cruz.

Page to stage: Quite coincidentally, we suppose, two different West Coast premiere productions based on bona fide literary masterpieces are now playing out through December on Berkeley stages. Shotgun Players is continuing its Ashby Stage run of Dave Malloy’s “Natasha, Pierre & the Great Comet of 1812,” a musical that snagged 12 Tony nominations when it ran on Broadway in 2017. Its source material? Believe it or not, it’s a 70-page excerpt from Leo Tolstoy’s “War and Peace.”  And on its Roda Theatre stage, Berkeley Rep has mounted “Wuthering Heights,” adapted and directed by Emma Rice from the classic Emily Bronte novel, a hit that wowed audiences in both London and New York. Both productions, we hear, incorporate some wacky humor along with the music. Find tickets and performance schedules at berkeleyrep.org and shotgun players.org.

Hooked on Books is a monthly column by Sue Gilmore on current literary buzz and can’t-miss upcoming book events. Look for it here every last Thursday of the month.