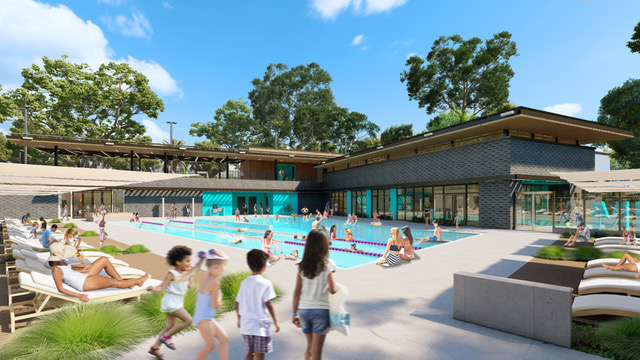 The city could award a contract as soon as its Dec. 5 regular meeting for construction of the Piedmont Community Pool project. If a contract is awarded that night, construction could begin early next year.

The city issued that announcement Monday night at the same time as, but separately from, the council’s regular Nov. 21 council meeting, which on its formal agenda listed a “verbal report on the status of the Piedmont Community Pool Project.” But the possibility of a contract award on Dec. 5 became the center of that verbal report at the council meeting on Monday night, too.

“I really can’t overstate how thrilled I am,” City Administrator Sara Lillevand told the council.

If a bid is awarded on Dec. 5, Lillevand said, it’s entirely possible construction could begin in January or February, en route to a hoped-for completion and opening in summer 2024.

On Nov. 16 the city received four bids to build the pool, the lowest of which — $21.35 million — is in line with construction cost estimates and anticipated available funding. The estimated cost to build the pool and associated buildings is about $21.6 million.

In September, the city had received bids from two pre-qualified contractors; the council on Oct. 17 rejected both of those bids because they exceeded city contract estimates by more than 15 percent. Even before that, the pool project had already been significantly downscaled to cut costs.

Most of the construction money will come from bond proceeds enabled by Measure UU, approved by Piedmont voters in November 2020. Other funding, about $2.1 million, is expected to come from an ongoing Piedmont Recreational Facilities Organization (PRFO) capital campaign, and the city continues pursuing funds from other sources to pay for fully electrifying the pool, including to heat the pool water.

Councilwoman Betsy Smegal Andersen said PRFO volunteers can’t possibly call everyone in Piedmont to give; she encouraged the residents to reach out to PRFO.

“If we want to close this (money) gap, we’re all going to have to be proactive,” she said.

Councilwoman Jennifer Long said this project will bring the community together, and is important for all Piedmonters.

“This isn’t only a project for people who swim,” she said.

Get more information on the pool project HERE.