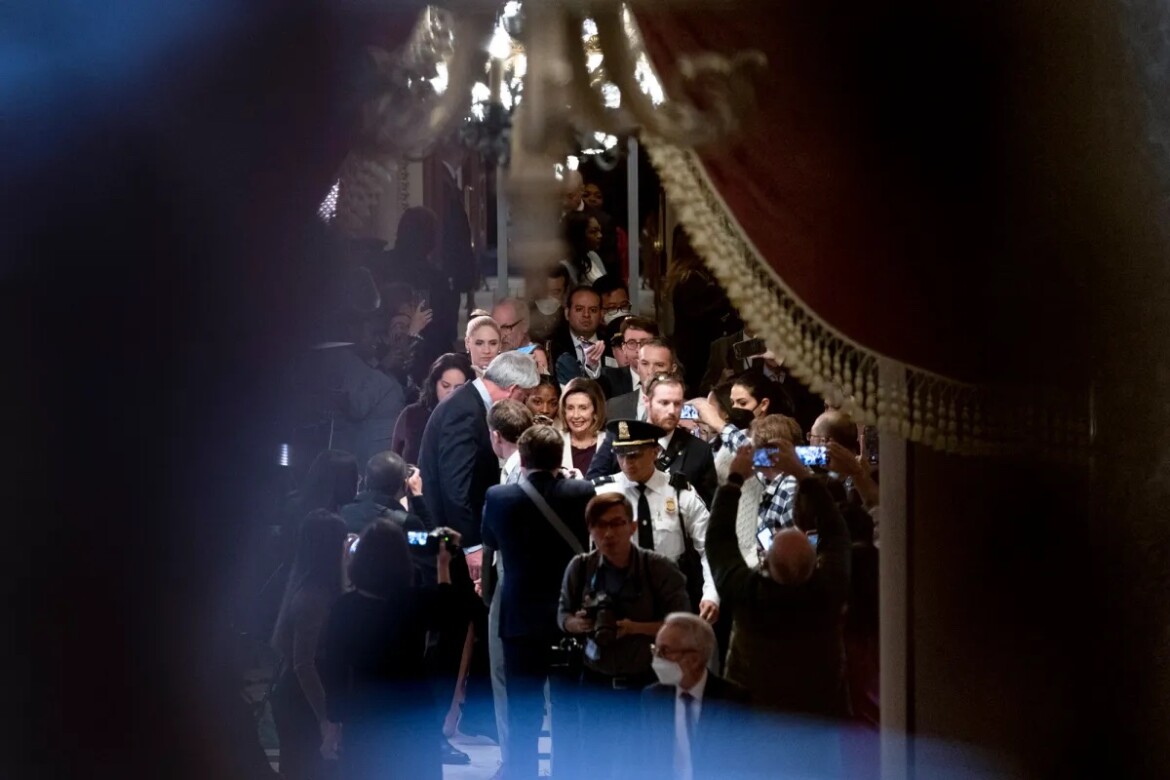 House Speaker Nancy Pelosi, center, is surrounded by members of the media as she heads back to her office after speaking on the House floor at the Capitol in Washington, D.C., on Nov. 17, 2022. Photo by Andrew Harnik, AP Photo

“We are mindful that we’re going to have to be more proactive as a state in terms of our efforts in Washington, D.C.”

That was Gov. Gavin Newsom’s delicately worded assessment of how California might fare differently under Kevin McCarthy — the Bakersfield Republican positioned to take over as speaker of the U.S. House of Representatives after his party won a slim majority in the midterm elections — than it did under Speaker Nancy Pelosi, the San Francisco Democrat who announced Thursday that she plans to step down from a leadership position next year even while remaining in Congress.

During a Thursday press conference in Napa Valley to highlight California’s firefighting investments and announce that peak fire season has ended in most parts of the state, Newsom said “no one has been more consequential in modern American history” as House speaker than Pelosi.

McCarthy, meanwhile, speculated on Fox Business that Pelosi chose to make her announcement now because “she just doesn’t want to hand me the gavel.” Instead, the incoming Democratic House minority leader — whom some suspect will be New York Rep. Hakeem Jeffries — will handle the formal transition of power.

Although Pelosi said she plans to continue serving in Congress — she was just reelected to another two-year term ending in 2024 — her decision to step down from a leadership role is likely to intensify a behind-the-scenes battle among ambitious San Francisco politicians to succeed her.

Also brewing in the background: a fight to replace Dianne Feinstein, another San Franciscan, in the U.S. Senate. Feinstein, who recently became the country’s longest-serving woman senator, has not yet indicated whether she plans to seek reelection after her current term ends in 2024, but officials are already angling for a seat that hasn’t been open since 1992 — especially amid reports of Feinstein’s alleged mental decline.

“Don’t ever count her out,” Newsom said Thursday of Feinstein. “I don’t care what the pundits are saying. … She still commands a room, commands our respect, and I don’t expect her to resign.”

During his 2021 anti-recall campaign, Newsom pledged to appoint a Black woman to Feinstein’s seat if she were to resign before her term ended. (He appointed California’s other U.S. senator, Alex Padilla, to replace Kamala Harris after she was elected vice president.) But that backfired among some prominent Democrats, prompting Newsom to walk back his comments.