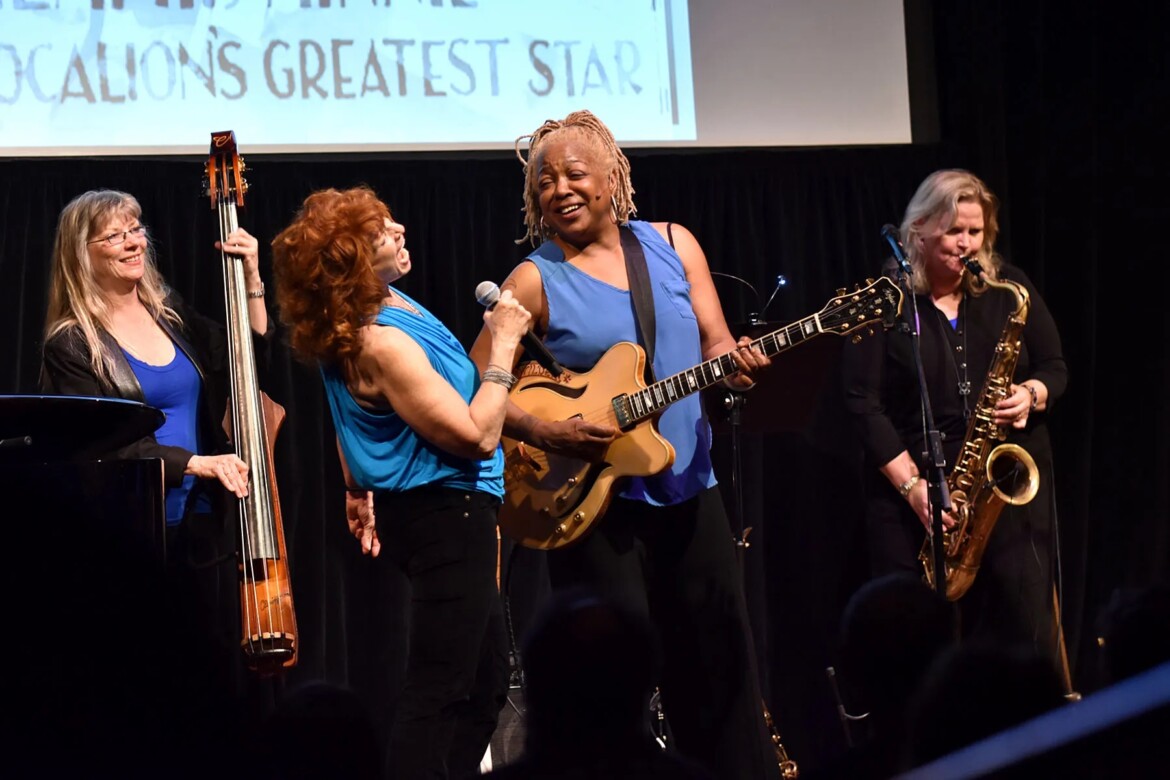 Growing up in the 1950s and 60s, Pamela Rose knew she wanted to sing the blues. Every song she heard in that genre spoke to her in powerful ways.

“That’s the music I grew up on,” she says today. “I wanted to be Aretha Franklin, not Doris Day.”

Rose, who has built a successful career anchored in the blues, is back this month with “Blues Is a Woman.” The award-winning theatrical show, which traces the history of women in blues, features Rose and an all-woman ensemble playing music spanning the 1920s to today. It returns to Berkeley’s Freight and Salvage on Nov. 19.

It’s a unique hybrid: part concert, part revue and part remembrance of the women who made the blues essential:  early blues women such as Ma Rainey, Sister Rosetta Thorpe, Bessie Smith and Alberta Hunter, up to more recent practitioners such as Ruth Brown, Nina Simone and Bonnie Raitt.

“We go through time and lay out the development of the blues,” said Rose, discussing the show in a recent interview. “The very early days when music came from Africa, trouble songs and chant music, minstrel shows – and explore what it was like to travel in those shows.”

It was women, says Rose, who really changed the trajectory of blues music; she cites the landmark 1920 recording of a song titled “Crazy Blues,” featuring Ohio-born Mamie Smith.

Wilder’s been with the show since its inception, in a workshop production at Freight and Salvage in 2016 and its official premiere at San Francisco’s Custom Made Theatre in 2017.  The guitarist, a proponent of the Delta Blues style, says all of the women honored in “Blues Is a Woman” broke new ground.

“The women are so important,” said Wilder, who was mentored by blues great Taj Mahal and has led her own band through tours of the U.S. and Europe. “There are so many who have not been recognized. But women have been playing from the beginning of the blues.”

Rose agrees. “With the blues, the first thing people think of is a man and his guitar,” she said. “But there’s so much more to the story.”

According to Rose, there’s a special quality that makes the show’s music timeless.

“These songs had a special persona,” she said. “They were frank, kind of sexually free. That was such an independent voice. They created a persona. Blues always speaks of big emotions – joy, rapture, heartache, desire – but when a woman sings it, it has that much extra power.”

The significance of those women, Rose adds, is intertwined with American history. “Their songs carried forward to the civil rights and feminist movements,” she adds. “This was the message: let yourself be free.”

Fully scripted, “Blues Is a Woman” ranges from heartbreakers like “Nobody Knows the Way I Feel This Morning” – “It’s been recorded by a lot of women,” says Rose, “because it is a woman’s song” – to Ida Cox’s delightfully ribald “One-Hour Mama.”

For Wilder, the show’s female point of view offers a significant departure from most blues histories. “It’s very important to know these stories,” she said. “There are so many who have not been recognized.”

Beyond that, adds the guitarist, the music just makes you feel good. “I love all different types of music, but this is something else,” she said. “When we get together and play this music, it’s just the best.”

Rose, who won a 2019 Lifetime Achievement Award from Bay Area Jazz and Blues Artists for her work on “Blues Is a Woman,” says the show, like the blues, has weathered political events and pandemic shutdowns.

“When this piece came out, it was right after Trump was elected,” she said. “Women were so angry and so scared. I think the show gave people a feeling of resilience. When you see six women onstage really supporting each other, there’s so much sisterly feeling – and that’s powerful.”