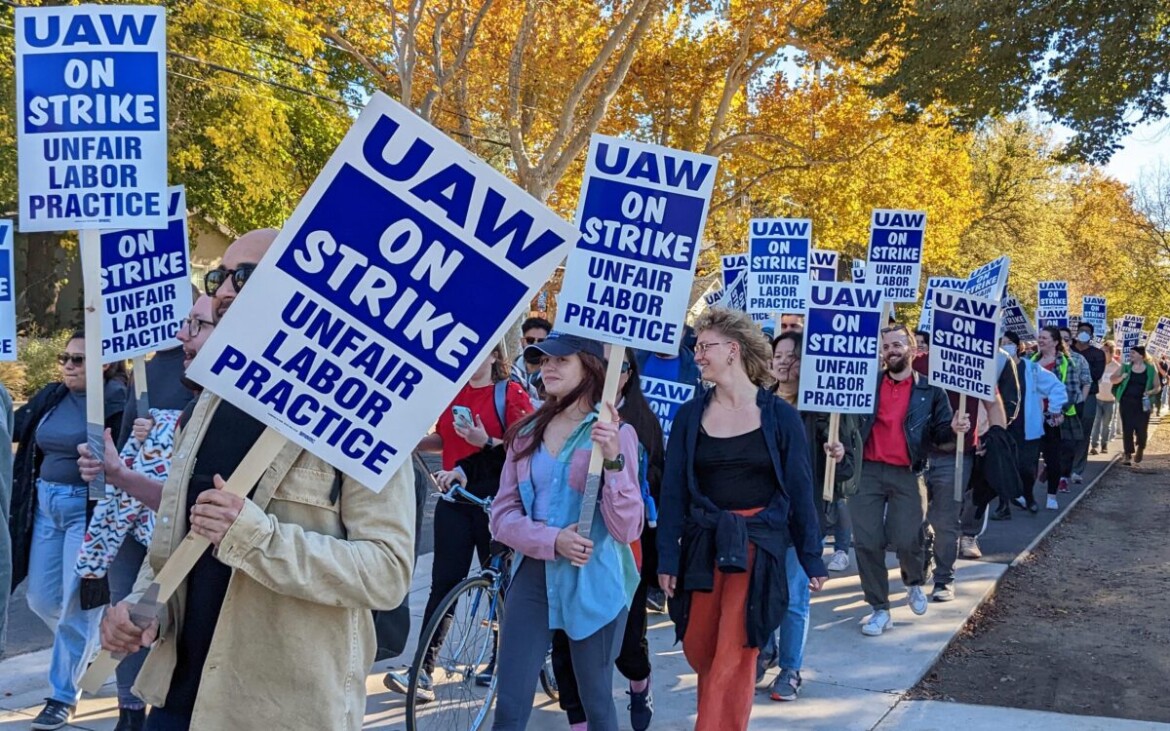 As students’ stress mounts during finals week over whether they will receive grades, University of California academic researchers and postdoctoral scholars reach a tentative labor agreement with the administration.

The five-year agreement includes wage increases that reflect the cost of living along with improvements for family leave, child care, transportation and job security.  The researchers and scholars, however, are still on strike in solidarity with academic student employees and student researchers. Of the 48,000 strikers, the agreement covers 12,000 academic researchers and postdoctoral scholars.

“We are proud to have reached agreements that address the soaring cost of living and reflect the value of our contributions at UC,” said Neal Sweeney, President of UAW Local 5810. “These agreements represent a new, best-in-class model that will improve the quality of life – and the quality of research – for scientists across the US. It is now time for UC to make serious proposals to Academic Student Employees and Student Researchers and to reach fair agreements that recognize the contributions these workers make.”

By October 2023, UC’s median salary for postdoctoral scholars will surpass Stanford University and be the largest salary increase for that group in the country, he added.

“There are millions of workers that are underpaid and struggling to get by,” Sweeney said, referring to other professions outside of academia. “This just really shows the power of a union and the power of workers coming together.”

The agreement means that the typical academic researcher will receive a 29% increase in salary over the life of the contract. For example, an assistant project scientist hired this year would see their wages increase by $3,078 by July, an additional $6,395 by July 2024, and by $19,423 by the end of the contract. Many postdoctoral scholars will receive a 20-23% salary increase — up to $12,000 — by October 2023. The lowest-paid scholars would see a 57% salary increase over the course of five years.

The strike of academic workers across the University of California entered its third week. Tensions have especially mounted across the nine undergraduate campuses when hundreds of full-time faculty in the system pledged Monday to join the work stoppage and not teach or submit grades until the strike ends.

“Our dedicated colleagues are vital to UC’s research activities and we are very pleased to have reached agreements that honor their many important contributions,” said Letitia Silas, executive director of system wide labor relations. “These agreements also uphold our tradition of supporting these employees with compensation and benefits packages that are among the best in the country.”

More than 200 faculty members across UC’s campuses had signed the pledge as of Monday afternoon.

“As long as this strike lasts, faculty across the system will be exercising their right to honor the picket line by refusing to conduct university labor up to and including submission of grades — labor that would not be possible without the labor of all other academic workers as well as university staff,” the faculty pledge states.

The striking academic workers — including teaching assistants, graduate student researchers, academic researchers and postdoctoral scholars — are asking for better pay, benefits and job security. The strike involves four separate bargaining units, all of which are represented by United Auto Workers.

UC and UAW bargained for 10 consecutive days between Nov. 14 and Nov. 23 before taking a break for the Thanksgiving holiday, a UC spokesman told EdSource on Monday. Negotiations will resume this week.

The timing of Monday’s faculty pledge is key, said Simeon Man, an associate professor of history at UC San Diego and one of the organizers of the pledge.

Seven of UC’s nine undergraduate campuses are on the quarter calendar and are now in their last week of classes, with final exams scheduled for next week. At UC’s two campuses that are on the semester calendar, Berkeley and Merced, instruction ends next week, and finals are scheduled for the following week.

With the strike ongoing, the ability of faculty to hold those final exams and submit grades is in jeopardy. Final grades are typically due shortly after finals, though some campuses have extended those deadlines.

In a systemwide letter to faculty, UC Academic Senate leaders acknowledged that there may be “unavoidable and understandable delays in grading this term,” given that teaching assistants typically play a large role in grading. The Academic Senate leaders said faculty can take advantage of the extended deadlines for grades and said faculty can also hire temporary readers to help with grading, though they acknowledge that doing so may not be practical.

The Academic Senate leaders also suggested that faculty consider making final exams optional rather than canceling them altogether, since some students may need to take the exam to raise their grade.

Faculty joining the work stoppage, including by not submitting grades, say they are exercising their legally protected right to do so under the Higher Education Employer-Employee Relations Act.

Marisol LeBrón, an associate professor in feminist studies and critical race and ethnic studies at UC Santa Cruz, this fall is teaching an intro to critical race ethnic studies class with about 200 students. She hasn’t been teaching her class, nor has she been grading assignments or giving out new assignments since the strike began on Nov. 14. Right before the strike, her students turned in their second assignment of the quarter, but she doesn’t have teaching assistants to grade them. This week, students were supposed to be assigned their final paper, but LeBrón emailed them Sunday night to let them know that she wouldn’t be able to assign it.

LeBrón added that those types of “serious disruptions to student learning” will only escalate as the strike continues, saying that “we’re now in the territory where this becomes a grade strike.” That means students may not receive letter grades at all for the quarter, which creates problems especially for those students who worked hard for a good grade and who may be planning to apply to graduate school.

“But the thing that I’ve been stressing to my students is that the disruption is not the fault of the teaching assistants and is not my fault, but is the fault of the administration,” LeBrón said.

“It’s the decision that the administration has made essentially to not bargain in good faith with these workers.”

The bargaining units say they have made some progress, including by securing stronger protections against discrimination and harassment as well as protections from unjust discipline. But negotiations have stalled in some key areas, particularly around wages for graduate student workers. UAW Local 2865, which represents those workers, says it made its most recent wage proposal for graduate student workers 11 days ago but hasn’t received a counterproposal from UC officials.

The UC spokesman, Ryan King, said in a statement that the two sides have conducted more than 50 bargaining sessions since the spring and “secured 95 tentative agreements” in that time. But, King added, they “remain apart on key issues related to tying wages and pay increases to housing costs and tuition remission for nonresident international students.”

UC is seeking a private mediator to help with negotiations, King added, but UAW has resisted that.

The striking academic workers have the support of the UC Student Association, which represents students across UC, including undergraduates. The student association adopted a resolution supporting the strike and has called on students to not go to class during the strike.

Man, the UC San Diego professor, said UC officials are counting on full-time Senate faculty to submit grades by the end of the quarter, which he said would take away one of the “most powerful tools” that striking workers have.

“I think the UC administration is counting on Senate faculty to willingly end the strike. I think it’s important for faculty to know they do not have to do this. We want to mobilize faculty across the UCs to basically stop being used to break up the strike,” Man said.

On Monday, academic workers held strike events across the state, including outside the UC central president’s office in downtown Oakland as well as on the UCLA, UC Irvine, UC Riverside, UC San Diego and UC Santa Barbara campuses.

“UC’s failure to bargain fairly and efficiently is putting education and research at risk,” Rafael Jaime, president of UAW Local 2865, said in a statement Monday, referring to UC’s lack of a counterproposal on wages for graduate student workers.

UC maintains that its latest wage proposal is “fair and generous” and “would place our student employees at the top of the pay scale among the nation’s leading public universities.” The UAW units, however, say that UC’s proposals amount to an effective wage cut because the rate of increase is less than inflation.

LeBrón, the associate professor at UC Santa Cruz, said faculty such as herself who have joined the work stoppage see the workers’ demands as “fair and reasonable.” She pointed to the high cost of living in Santa Cruz and other UC campuses, particularly Berkeley, Los Angeles, San Diego and Santa Barbara. Many academic workers at Santa Cruz, ​​LeBrón said, commute between two and three hours to campus because they can’t afford to live nearby.

LeBrón added that it’s impossible to teach her ethnic studies course this fall without her five teaching assistants.