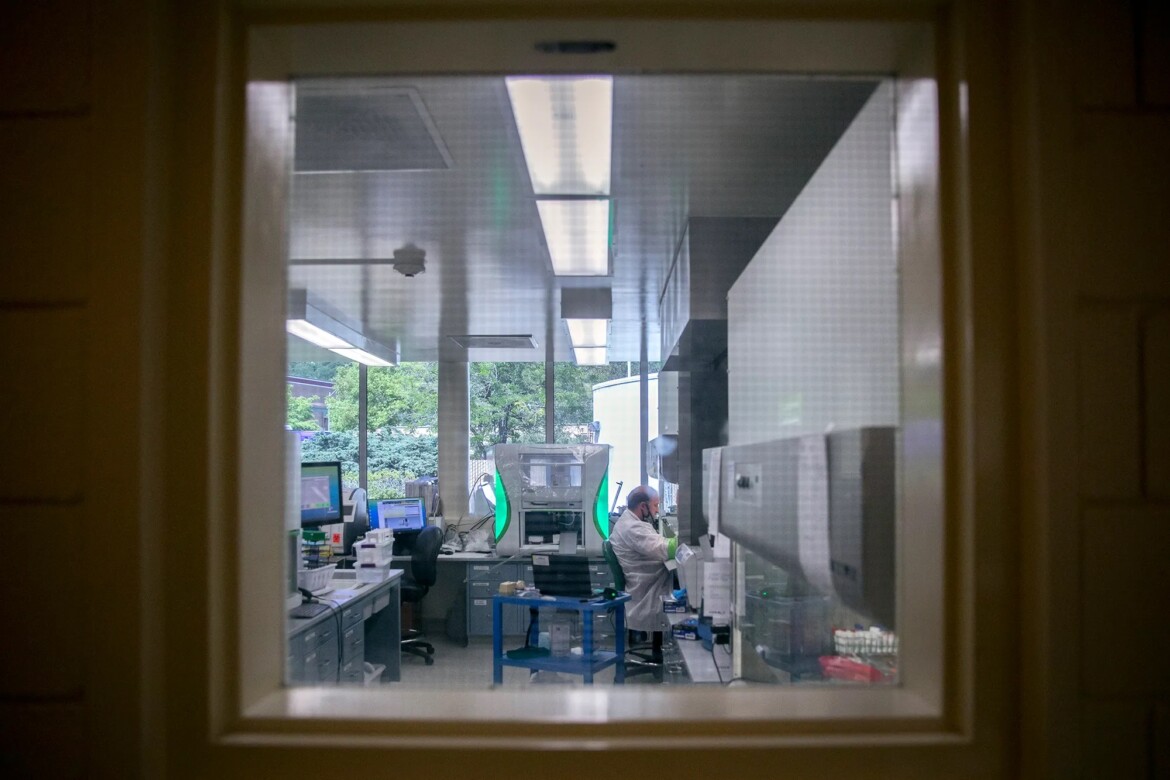 A two-year search for a laboratory director.

It’s evident that California’s public health workforce is tired, strained and under-resourced after a prolonged response to the COVID-19 pandemic, but what’s not clear is exactly how hamstrung it has become — and how prepared it is for a future emergency. The pandemic brought an unprecedented influx of money to public health and a $300 million annual state budget commitment, but whether the cash is enough to make up for long-time shortages is uncertain.

“It’s been a long time since anyone has paid attention to (public health),” Long Beach Health and Human Services Director Kelly Colopy said. “Our funding is supposed to be about planning for future emergencies, but there’s no money to respond until after it’s happened.”

To address the long-term workforce and infrastructure needs, a coalition of local health departments has been calling on the state to perform a comprehensive workforce study to make recommendations for adequate resources. The Legislature approved a measure that would have required the California Department of Public Health to do just that, but Gov. Gavin Newsom vetoed it in September, citing increased investments already made in public health during this budget cycle.

“I believe we should turn our focus to utilizing the resources received in the Budget for this transformation, which calls for immediate action on recruitment and hiring to support a modern and innovative public health system,” Newsom’s veto message states. Many of his vetoes from this session cited lower-than-expected tax revenues.

In addition to the $300 million in ongoing funding, $200 million of which is for local health departments, the budget included $75.6 million over three years to bolster workforce training programs.

However, public health leaders across the state say while they’re grateful for the influx of cash, they already know it’s not enough for sustained improvement.

“It takes time and continuous funding to build up and maintain the public health workforce,” said Donna Ferguson, laboratory director at the Monterey County Health Department.

“It took over 20 years of decreasing funding to get where we’re at now. It will take a decade or more to ramp up staffing.”

Ferguson said half of her laboratory staff are student interns or temporary workers paid for with emergency COVID-19 funds. At the beginning of the pandemic, she had three microbiologists and three assistants, all of whom could only collectively process 20 COVID-19 tests a day. It was an entire year before capacity could be ramped up to 2,000 tests per day with more advanced equipment and six more lab assistants. The one-time workforce money from the state will let her keep two of the temporary workers for the next three years.

The problem is, without a statewide assessment of public health to establish baseline operational costs and resource gaps, funding for the safety net and emergency response system will likely return to the usual boom-and-bust cycle. In the decade following the 2008 recession, state funding for public health dropped 64% and remained stagnant until the pandemic led to an infusion of $12.3 billion. Emergency preparedness and response funding also decreased by 19.5% between 2007 and 2009.

The $75.6 million allocated in this year’s state budget, known as Public Health Equity and Readiness Opportunity, or HERO, funds, are intended to help shore up the local public health workforce, but it must be spent in the next three years.

“I’m not optimistic about using HERO funding to evaluate existing infrastructure because the money must be spent fairly rapidly, which doesn’t allow for time to ensure that funds are spent appropriately,” Ferguson said.

Why is an assessment needed?

Health care workforce development has been a priority of state officials, professional associations, and health care advocates for years, but public health is routinely left out of the conversation, with most efforts focused on clinical and patient-care jobs.

Despite the critical services they provide, no one collects comprehensive data on public health workers.

The California Department of Health Care Access and Information collects data and submits annual reports to the Legislature on the workforce and education pipeline for nurses, primary care physicians and specialists, and dentists. These reports often identify geographic areas with staffing shortages, the percent of the workforce nearing retirement, and other demographic information including community representation and diversity. In addition, the state Board of Registered Nursing has commissioned researchers at UC San Francisco to conduct workforce studies since 2005, assessing how many nursing students graduate each year, educational preparedness, wages, job satisfaction and policy impacts.

In the past two years, acute clinical care worker shortages have led to prolonged strikes, ballot measures and reliance on temporary out-of-state nurses, which the state signed a $1 billion contract for in 2020.

In 2017, a group of health care philanthropies created the California Future Health Workforce Commission to assess whether the state’s future employees will be able to meet growing health care demands.

But all of these efforts have placed limited emphasis on the public health workforce. Michelle Gibbons, executive director of the County Health Executives Association of California, said data is needed to determine whether there are adequate resources to fulfill these responsibilities. The association sponsored the bill that Newsom vetoed.

Last year, the California Department of Public Health convened a Future of Public Health Work Group to inform Newsom’s budget allocation. It estimated between 1,900 and 2,300 additional public health employees are needed across the state and that 61% of senior state public health workers are eligible for retirement. Many of the local departments that participated in the work group say, however, the report doesn’t provide enough detailed conclusions to craft robust policy.

“It was very high level,” Gibbons said. “It was a good starting point, but it didn’t say, for example, here’s how many public health labs we should have to keep communities safe.”

That’s one of the questions local departments hoped would be answered by the study required in the vetoed measure. Other questions Gibbons said need to be answered include how many public health nurses or epidemiologists are needed in each community and how many staff have left in the past two-and-a-half years. Eleven public health labs have closed in California since 2000, leaving 29 operating across the state’s 58 counties.

“There’s a lot of disparities in how the different public health departments run,” said Rosyo Ramirez, deputy director of community health at the Imperial County Health Department. “It would have been good to prioritize and identify the major gaps throughout the state, so that we can be prepared, you know, for whatever the next thing may be.”

Technical workers are hardest to hire

Emergency funding during the pandemic allowed health departments to rapidly increase staff, with some doubling in size, but that money is temporary and hasn’t fixed long-standing salary and workforce pipeline issues. Officials say highly skilled workers like nurses, microbiologists and epidemiologists are increasingly difficult to hire.

In Imperial County, Ramirez said her public health department got $15 million in pandemic funding, but she still couldn’t find qualified laboratory staff who were willing to work in public health.

“Although we had money for testing, we couldn’t take on more because we couldn’t recruit staff,” Ramirez said. She also hasn’t been able to hire epidemiologists or public health nurses.

In Long Beach, Colopy said her clinic is operating at half capacity because of a “dire” shortage of public health nurses. The city’s laboratory also hasn’t had a director in more than two years.

One of the biggest factors hampering recruitment and retention is low salaries. There is no data on the wage gap between public health and private sector jobs, but anecdotally, skilled workers could boost their salaries by $5,000 to $10,000 a year in the private sector. The County Health Executives Association pushed for an additional $120 million for public health recruitment and retention bonuses, but the money was not included in the state budget.

“If you can’t pay for certain positions you’re constantly fighting with people leaving,” York said. “We had a neighboring county reach out to us and say ‘We got approval for a significant salary increase and a signing bonus. Just giving you a heads up that your nurses might leave.’ We can’t compete with that.”

York said she’s grateful for the spending boost public health is getting, but it doesn’t come close to allowing the department to fully staff its workforce. Of the 40 temporary employees hired with emergency COVID-19 funds to fill positions that have been vacant or eliminated over the years, the ongoing funding will only make eight to 10 of those positions permanent.

It’s not all bad news. For some laboratory positions like microbiologists, the $75.6 million allocated for workforce development is a boon.

Historically, only 12 public health microbiologists could be trained a year in California because of cost limitations, said Godfred Masinde, president of the California Association of Public Health Laboratory Directors and laboratory director for the San Francisco Department of Public Health. Microbiologist training costs public health labs about $30,000 per student, Masinde said. With the increased funding, the association can now train and license 45 microbiologists annually.

Portions of the money are also intended to train laboratory directors, epidemiologists and mid-career professionals, as well as bolster career pathway programs at California universities and colleges — but it’s a short-term solution lasting only three years.

“After that we’ll have to find more money, or we go back to 12 (students),” Masinde said.

Trauma and burnout high among staff

Complicating recruitment challenges is the rapid exit of current employees. Like hospital workers and nursing home staff, public health employees are leaving the workforce in droves.

For some counties, the pandemic was one event in a long string of emergencies.

“The Camp Fire was probably the worst,” Butte County Director York said, referring to the 2018 blaze that killed 85 people and devastated the town of Paradise. Cleanup work from the fire is ongoing.

“We had a six-month break and then COVID hit. You’re running on adrenaline 24/7 for months at a time,” York said. “There have been a lot of people who said ‘I can’t do it anymore’ and left.”

Some departments have hired therapists for their remaining staff. Colopy said many in her Long Beach staff show signs of trauma and exhaustion.

“Some of it is burnout, some of it is fear of the unknown or the things they saw,” Colopy said. “When we first learned about COVID, our nurses geared up in full PPE not knowing what was coming. It takes a lot of guts to do that, and each of those things built on each other.”

One of the remaining unknowns is how the pandemic has impacted workforce turnover. In May, a coalition of public health and labor groups held a press conference highlighting the need for more public health resources. At the time, 62 senior public health leaders throughout the state had left the workforce since the beginning of 2020, said Dr. Karen Relucio, Napa County health officer and Health Officers Association of California president.

“We do not have accounts of other positions that have been lost, but we know that this great resignation has affected more than just senior leadership and has gutted the public health workforce from top to bottom,” Relucio said.