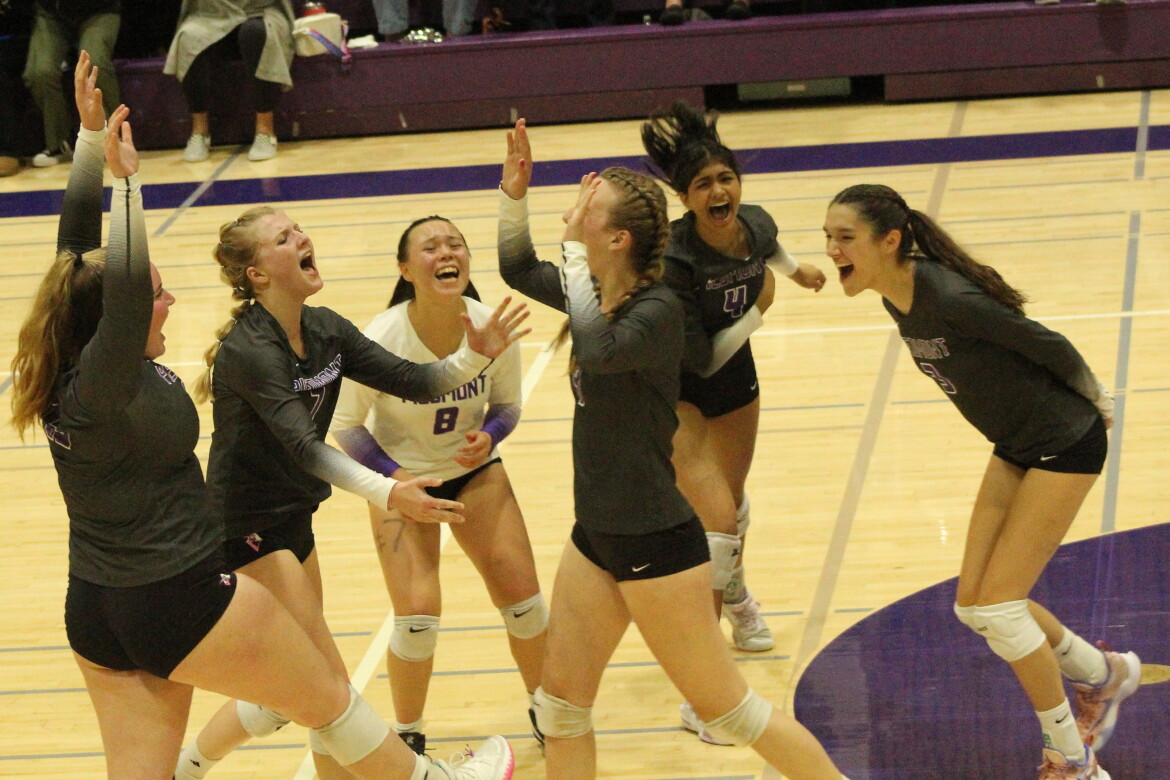 Piedmont celebrates after winning a set against Castro Valley

Every set was tight at the beginning except for the final one, where the Trojans jumped out to a 6-0 lead and won handily.

“If you get the first couple of points in the fifth set, you usually will win,” Highlanders coach Mariah Cardenas said. “Our issue was we were not converting (points). We can’t click.”

Cavenaugh said it was an emotional night. But it also was a big match.

“It also means this is the time we put everything out there,” she said. “Fight to the end more than we have all season.”

The Highlanders were fired up after taking the fourth set to tie up the match. Castro Valley had gotten out to a good start, opening up leads of 5-1 and 6-2, thanks in part to the strong play of outside hitter Maria Fanger, who recorded a block and a spike for points during the run.

But Piedmont quickly rallied to tie the score at 6-6, Cavenaugh had a key block of a Lauren Au kill attempt for one of the points.

After the Trojans went up 8-6, the Highlanders took the lead for good during a four-point run on Bauer Peterson’s serve. Lorin, who started out the season as the team’s libero, had a key kill during the run.

“I love to hit,” Lorin said, adding that she was happy Cardenas had moved her to outside.

Castro Valley cut the deficit to 14-13, but Kathari nailed a spike to keep Piedmont ahead. The Highlanders extended the lead to 22-16 before the Trojans rallied. Town finished off the set with an ace and the players reacted with leaps, screams and hugs.

Kara Matthews scored a couple of kills for Castro Valley as the Trojans jumped out to the lead in the final set. Roisin Nugent also had two key kills in the set.

Piedmont got out to a 5-1 lead in the opening set with Town recording an ace and Kothari and Lorin each putting down a spike. Tessa Smith, a freshman, had a couple of spikes for the Trojans as they rallied back to take the lead. The set was tied at 17-17, 18-18 and 19-19 before Castro Valley got two more Matthews kills to move ahead. Bianca Petalver served an ace to close the set.

The Highlanders raced out to a 5-0 lead in the second set. Cavenaugh scored on a block and Town had an ace to get things rolling. Smith had a couple of kills as Castro Valley came back. Matthews and Fanger scored on consecutive kills to give the Trojans a 12-10 lead.

Castro Valley maintained the lead until late in the set. Lorin took over the serve with Piedmont down, 20-17. But a pair of aces along with a Castro Valley error tied things up. A Klara Zeitlow ace and a Kothari spike gave Piedmont a 23-22 lead. Matthews evened the score on a spike, but DeYoung had a kill to give the Highlanders the lead, and Cavenaugh spiked the set-clinching point.

Piedmont is scheduled to play at Alameda on Oct. 14. The Highlanders then travel to face San Leandro on Oct. 19.