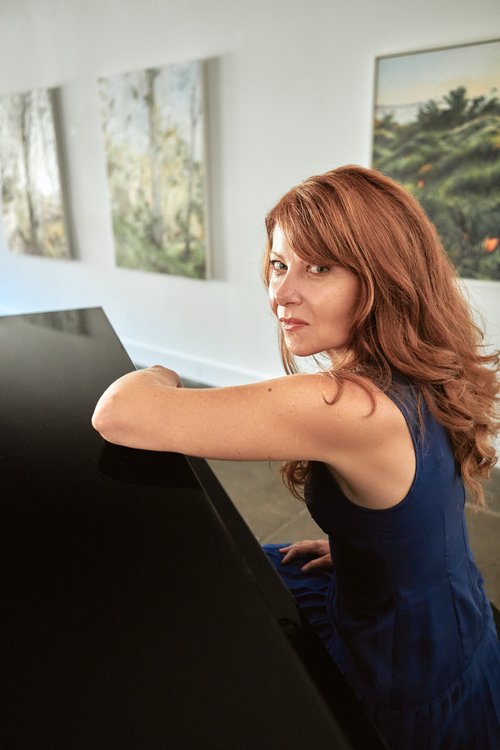 Every ticket holder attending A Cabaret of Souls, Left Coast Chamber Ensemble’s intimate musical gala Oct. 15 at the Piedmont Center for the Arts, is in for a rare treat. Silent and live auctions and Fund-A-Need offerings to benefit an arts organization’s programs are standard fare for a gala, along with delectable appetizers and adult beverages. But far from commonplace is the opportunity to sit within arms reach and experience in an intimate setting an artfully curated program of songs featuring the marvelous voice of soprano Nikki Einfeld and the meticulous, sensitive playing rendered by pianist Eric Zivian.

The two Left Coast musicians and frequent collaborators have selected works by composers Florence Price, Kurt Weill, and Stephen Sondheim. In an interview, Einfeld says, “I tried to hold a theme through the evening that will sew all of the works together. It’s an exploration of what is behind the scenes in the arts. By embodying different characters in each song, I’ll give people a vision of the breadth of Left Coast.”

Einfeld, in addition to her work with Left Coast, performs frequently with San Francisco Symphony and Marin Symphony, among others, and has appeared with The Wunch New Music Festival in Kansas, Victoria Symphony, Earplay, Empyrean Ensemble, Calgary Opera, and more. Increasingly, the Canadian-born vocalist will both perform and direct in new, contemporary works. In past seasons Einfeld assumed both roles in Christopher Stark’s From the Field (performing the role of Dorethea Lang) and co-directed and took on the title role in Death with Interruptions by Kurt Rohde.

“It is special to work with live composers on current issues. This season, in April (of 2023), we’re doing two one-act operas. One is by Anthony Green and will be focused on pandemic life; on being in isolation and how that affected people. I am drawn to directing because I have always been able to read subtext into the action. I’m fascinated with all the aspects of putting theater together. I always want to talk about characters, the backstory; all of those moments that are so important and change the staging, even if the subtext is something the audience will never know.”

On the gala program at PCA is Kurt Weill’s Youkali, a piece she said evokes a mystical place. “Through the lyrics you can experience different levels of lust and love and beauty. And then at the end, you realize it’s only a dreamed place, a mirage in the mind that you never quite reach.”

While participating this year at the Valley of the Moon Music Festival, a pivotal component of an organization co-founded by Zivian with cellist Tanya Tomkins, Einfeld was reminded of the spirituals and art songs of composer Florence Price. “For the gala, I wanted to do something that embodied the more prominent positions that female composers of color are taking. The title of one song, The Heart of a Woman, is the same as her biography, so this is our way of showing a little glimpse into her life. Vocally, it’s beautifully chromatic and you feel the spiritual tradition in the writing, except that it stays classical, structured, full voice. She writes dramatically for the text, so her word painting is beautiful with rhythms that echo with the energy of the words.” By spinning air through the individual notes of the song, Einfeld has discovered a technique and a richness that allows the notes to melt together. “You can’t hear the divides between one note and the next. You can make the gesture of the song pour like honey.”

With five songs by Stephen Sondheim on the program, Einfeld highlights Love Is Like Sand. “It’s from an un-produced show and just never got picked up. The notes on the screen play for which it was intended are hysterical. It says the camera will “fade in” on a woman in a sexy dress singing about sand and how it’s like love and can get sticky or blows away leading to a sand dune situation. I love it because it plays with word painting in a fabulous way. You have slippery and clingy alliterations and Sondheim just knew how to write. It’s a gem.”

An equal treasure is performing with Zivian. “Eric and I have literally run the gamut on the repertoire we’ve performed together, both with Left Coast and Valley of the Moon. He uncovers parts of the text I’ve never come upon, and he breathes with me. That means it’s a full body experience for both of us. Plus, he’s brilliant at the keyboard, both as a soloist and as a collaborator. What I’ve noticed is that he can sense when I need more space or time for my voice. In creating that space, it allows me to use more color in my voice. That shows that he’s constantly listening. I always feel he’s just as much a part of the drama as I am.”

Partake in a Silent Auction, Live Auction, and Fund-A-Need to benefit our programs.