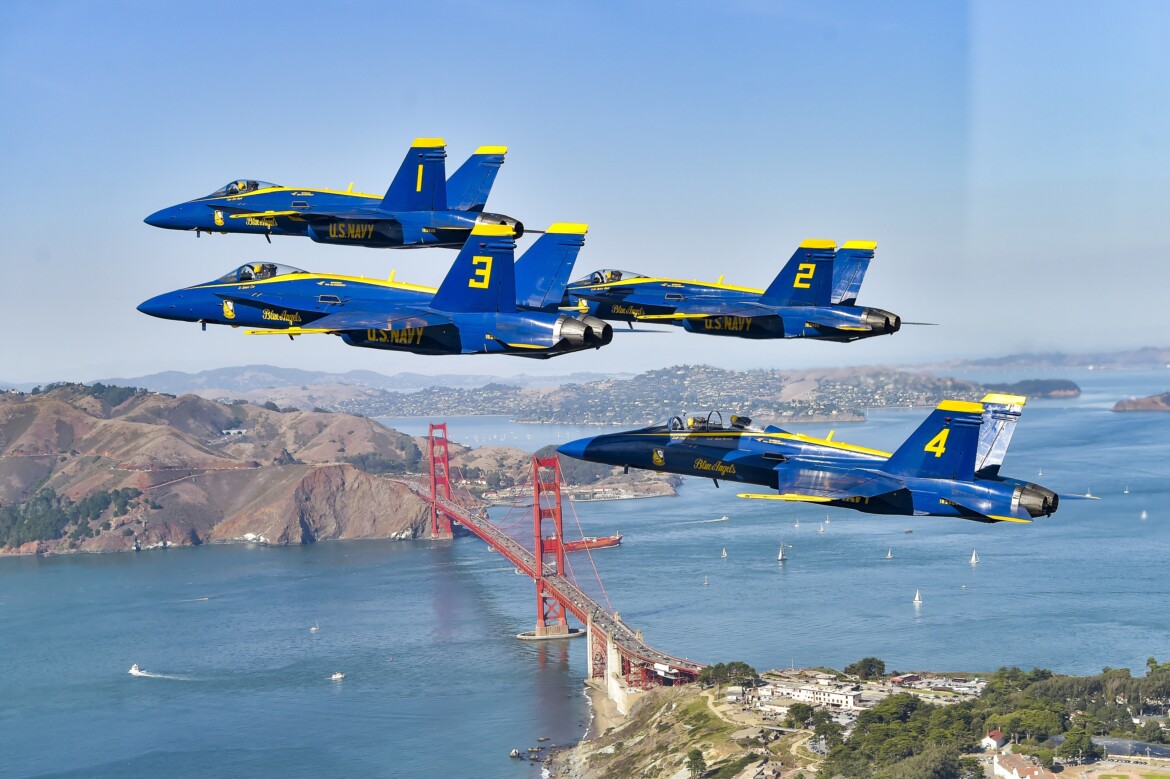 The Blue Angels are scheduled to participate in events at 32 locations across the country.

Anchors aweigh! Fleet Week is upon us, with the annual showcase of military ships and planes to parade around the Bay Area’s seas and skies.

On Friday the Blue Angels Survey Air Show Rehearsal, featuring practice runs for the U.S. Navy Blue Angels, will be from noon to 4 p.m. as the squad prepares for this weekend’s air show over the Bay Area.

From 10 a.m. to 8 p.m., music will be in the air as the Navy Band Southwest and 1st Marine Division Band perform publicly at various locations.

Through Oct. 11, onlookers will flock to Fisherman’s Wharf, Marina Green and other spots along the water to catch a glimpse of air shows and see massive naval ships in person.

Founded in 1981, San Francisco Fleet Week is a tradition conducted in honor of U.S. Military service members, with special emphasis on the U.S. Navy and Coast Guard. And with the weeklong festivities also comes the crowds: Fleet Week attracts roughly one million onlookers every year, officials said.

Held between the Golden Gate Bridge and Alcatraz Island, this weekend’s headlining air show will feature the iconic Blue Angels, the U.S. Navy Leap Frogs Parachute Team and even a commercial airliner, the United 777.

Most viewers lay out fold-out chairs and picnic blankets on the Marina Green, Twin Peaks, Pier 39 and Crissy Field to get a view of the air show for free.

For an elevated air show experience, patrons can visit Fleet Week’s website to purchase box seats and exclusive club access for the event, with tickets ranging from $105 to $375.

Starting at 11 a.m. Friday, visitors can watch a fleet of visiting ships sailing into the Bay in the Parade of Ships. The San Francisco Fire Department’s fire boat will serve as lead escort, shooting water into the air to kick off the event.

For an in-depth look at the life of a sailor, civilians are invited to step aboard the five Navy and Coast Guard ships docked at the Port of San Francisco. The largest ship, the 16,700-ton USS Harpers Ferry, will be docked at Pier 35. Guided ship tours will run from 10 a.m. to 4 p.m. Wednesday through Sunday, and 9 a.m. to 12 p.m. Monday, Oct. 10.

Away from the waterfront, there are also plenty of opportunities to participate in the festivities, like tuning into the free concert series hosted throughout various neighborhoods during the week.

There is also a special presentation of military K-9 services at Duboce Park from 10 a.m. to 2 p.m. Saturday, to highlight the work of the highly intelligent dogs that help service members conduct search and rescue and bomb detections.

The U.S. Marine Corps 1st Marine Division Band will pay special tribute to fallen soldiers at an “Honor Our Fallen” concert at the Herbst Theatre on Thursday.

More information about Fleet Week events can be found online.