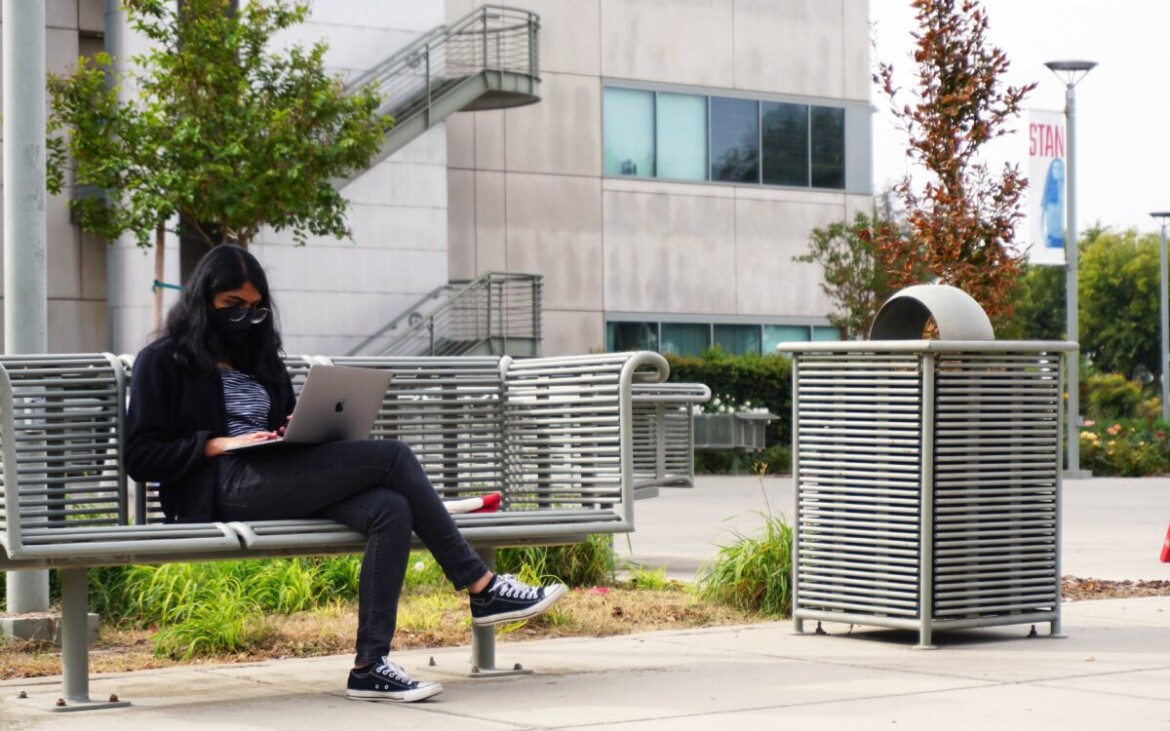 A student works on a computer in the quad area at California State University, Stanislaus.

Colleges nationwide and in California continue to lose undergraduate students, but the declines have slowed compared to the past two years when the pandemic upended education, a national report shows.

California saw a 1.1% drop in undergraduates since last year, a slower decline than last fall when enrollment dipped 5.9%, according to preliminary fall 2022 data released Thursday by the National Student Clearinghouse Research Center.

For the first time since the pandemic, the declines nationwide are steeper at four-year schools than at community colleges, which have benefited from double-digit increases in dual enrollment high school students.

“Undergraduate enrollments are still falling in this term. The rate of decline is lower than it’s been, but after two straight years of historically large losses in student enrollments, it’s particularly troubling that the numbers are not climbing back after this point, especially among freshmen,” said Doug Shapiro, executive director of National Student Clearinghouse Research Center.

“Although the decline has slowed and there are some bright spots, a path back to pre-pandemic enrollment levels is growing further out of reach,” he said.

While pandemic-era enrollment declines in higher education have begun to slow, they have not rebounded to pre-pandemic levels.

“Many four-year institutions are still below their freshman numbers from last year, much less going back to their freshman numbers from 2019, which is very concerning,” Shapiro said. “And I think even the increase in community college freshmen is still small and nowhere near recovering from the huge declines in community college freshmen that we saw in fall of 2020 and fall of 2021.”

The fact that freshman enrollments are increasing at lower-cost community colleges while declining at four-year colleges suggests that costs are playing a role, said Shapiro.

“That’s highly suggestive to me that affordability is a part of the equation,” Shapiro said.

There was a 0.5% increase in 18- to 20-year-old undergraduates, most of them not freshmen. That suggests that some traditional-aged college students are returning after stopping their studies, Shapiro said.

“There’s some evidence for stopped-out students returning to their undergraduate programs,” he said. “But we’re not seeing the return of what we might call the lost freshman of fall 2020 and fall 2021. So they’re not coming in as freshmen at this point.”

White students had the steepest decline in undergraduate enrollment, dropping  3.6% since last year. Black student numbers declined by 1.6%. Both Asian and Native American students declined by 0.8%. The number of Latino students increased by 1.2%.

The center’s data comes from 63% of degree-granting institutions that receive federal funds and represents 10.3 million undergraduate and graduate students in the country. The California results are based on 47% of the institutions.

Some other highlights of the study: