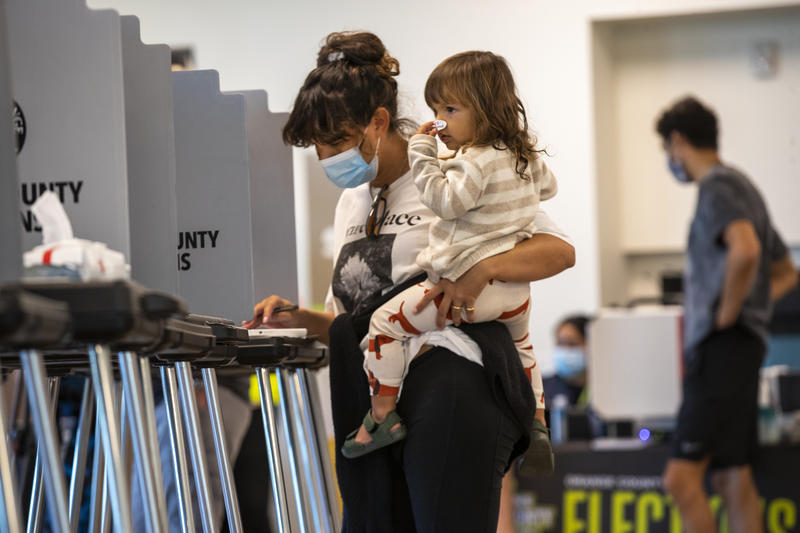 School board elections, once considered minor local down-ballot races by voters, have taken on new significance this year. Across California, conservative groups have leveraged parental angst, fueled by COVID-19 school closures, to recruit and train candidates to run for school boards.

The California Republican Party, which has struggled to win state seats in Democratic-dominated California for the last three decades, saw the wave of parent frustration as an opportunity to win school board seats. Once COVID-19 protocols loosened and mask mandates were eliminated, conservatives turned their energy to fighting educational policies on gender identity and racial equity.

The party started Parent Revolt, a program that recruits and trains candidates for school board seats. The program offers virtual and in-person training and connects candidates to training offered by other organizations.

This is the first time in state history that there has been this much attention on public schools, said Shawn Steel, who represents California on the Republican National Committee.

“It’s a kind of new exploration,” he said. “Most of the time party folks have not looked at the so-called down-ballot races. I’m so excited about what is happening in the schools.”

The Republican goal is to flip as many school boards as possible to give them a conservative majority. The party plans to continue this effort in the coming years, Steel said.

“There is going to be a lot of consternation among the left,” he said.

Once the dust settles after the November elections, Steel said the Parent Revolt committee will coordinate with other groups to determine what action to take next. First on Steel’s list is firing the lawyers who, he said, gave school boards bad advice and superintendents who encouraged masking “for unnatural periods of time,” and who embrace critical race theory.

“It’s racist,” Steel said. “Anyone who is Caucasian is an easy target. You have to shake their wokeness.”

Critical race theory is typically taught at the university level. It examines how laws, regulations and government practices, such as zoning restrictions, have perpetuated racial injustice. Critical race theory is not included in the voluntary state model curriculum. However, it is taught in some districts that have adopted an alternative curriculum promoted by the Liberated Ethnic Studies Model Consortium. Critical race theory is often confused with culturally relevant teaching or pedagogy, according to the California School Boards Association.

Reform California is one of the many conservative organizations that has also held meetings and workshops to recruit and train candidates for school board this year. One of Reform California’s goals is “to protect our children from toxic and divisive curriculum (e.g. critical race theory) that is being used to advance extreme political agendas,” according to its website.

A survey of media stories across the state shows that some churches also are jumping into the political fray. In Placer County, near Sacramento, Destiny Christian Church in Rocklin has teamed up with the Christian advocacy group the American Council to recruit candidates to advance a “biblical worldview,” according to the Sacramento Bee.

In Riverside County, in March, the 412 Church Temecula Valley was the site of an “endorsement draft” of conservative school board members, complete with a hype video set to the “NFL on Fox” theme music, reported The Press-Enterprise. The pastor, the Rev. Tim Thompson, spoke at the rally for school board candidates endorsed by the Inland Empire Family Political Action Committee, according to the article.

Some question whether churches that sponsor political events are disregarding the establishment clause of the Bill of Rights, which requires the separation of church and state, and the Johnson amendment of the tax code, which prohibits tax-exempt churches and affiliated groups from participating in political campaigns for candidates for public office. It also says the clergy can’t promote candidates from the pulpit.

Most of the energy around recruiting and training candidates for school boards is coming from conservative groups right of center, said Troy Flint, chief information officer for the California School Boards Association.

It’s unclear if conservative efforts to recruit school board members mean that more people are running for the 2,500 or so seats that are up for election this year. While Steel reports crowded races in San Diego, Orange and west Riverside counties, where conservative groups are active, many school board seats across the state have only a single candidate.

There are hundreds of school board races with only one candidate throughout the Bay Area, according to the San Francisco Chronicle. School board candidates also are walking into seats unopposed in places like Clovis, San Luis Obispo, Elk Grove, Anaheim and West Sacramento, according to information on Ballotpedia.

California School Boards Association President Susan Heredia said that school board members who are not running this year have told her they are exhausted from the amount of new information they have had to learn during the COVID pandemic, and have been under extreme pressure from parents and others who do not agree with the COVID safety protocols required by the state.

“There is such pressure from the anti-vax and anti-mask collective to unseat incumbents that some incumbents are saying it’s just not worth it,” she said.

“The extent to which school boards can be captured by anti-democratic interests is a real danger,” he said.

Most often, it’s the incumbents who are going unchallenged this year, but in some cases, board members are taking their seats without having to campaign or present their positions on issues to the public.

Local businessman Dennis Delisle was the lone candidate for a seat on the Morgan Hill Unified School District until the San Francisco Chronicle published a story about racist and homophobic statements in a book he wrote. In the book, “Calling the Called,” Delisle contends that the Bible should be taught in school, that immigrants should leave their culture behind and assimilate into American culture, and that the descendants of slaves are better off now because their ancestors were abducted and brought to the United States.

When the news article came out there were only five more days for challengers to file paperwork to run for office. If no one stepped forward, Delisle would have walked into the seat without an opponent. That was the nudge it took for retired school librarian Terri Knudsen and attorney Armando Benavides to enter the race.

“My concern is for all the students in Morgan Hill,” Knudsen told EdSource. “The title of the article was talking about his background, of possibly being racist and homophobic. Having worked in school districts for 25 years, I know all kids are important, including LGBT students and students of color.”

Benavides, who also is a family therapist, called Delisle “too extreme for our community.”

“Delisle put out a flier that said the duty of board members is to be responsive to the community’s values and priorities,” Benavides said. “The question is whose values and whose priorities?”

Delisle did not return messages requesting comment for this story.

California Assemblyman Kevin Kiley, R-Granite Bay, who is running for Congress against Kermit Jones, has endorsed at least 200 school board candidates and has no plans to stop.

“I think this year was different because you had so many people stepping forward who have never run for office before, but have leadership in the parent movement or have fought to get districts to do the right thing, advocating to get them open when they were shut down for no reason at all,” Kiley said.

Candidates who want Kiley’s endorsement fill out an online form that is vetted by a committee. If they are approved they become part of a directory of school board candidates called “Champions for Kids.” Kiley says he’s looking for candidates who will fight for what is best for students and be a voice for parents. He said it was easy to endorse so many this year.

Lance Christensen, who is running for state superintendent of public instruction against Tony Thurmond, also has endorsed a large slate of school board candidates, who can apply on his website.

Politicians have long lent their endorsements to local candidates who they knew, but it was not as organized in years past, said UCLA’s Rogers.

“It’s clearly a thing now,” he said. “In Florida you have the governor moving in this direction with a real sense of purpose. There is a sense in which you can build and mobilize something like a grassroots effort when you have the support of local politicians. There is a certain genius to it.”

The California Teachers Association typically offers endorsements in about 500 school board races each election year, said Lisa Gardiner, spokeswoman for the union. This year isn’t any different, she said, adding that contributions to campaigns also are about the same as in previous years.

“There is no question that there is more attention to school board seats this year, but again our educators have always known that school boards matter and the outcome of school board elections matter,” she said.

Parent candidates say they want concerns to be heard

One of Kiley’s many endorsements has gone to Jonathan Zachreson, who is running for the Roseville City School District board. The district is located in Placer County near Sacramento. Zachreson is the father of two teenagers, ages 18 and 15, and a 5-month-old baby.

After COVID-19 closed schools Zachreson created the Reopen California Schools Facebook page to give a voice to parents frustrated by the closures, and later by mask and vaccination mandates.

“I believe parents need a seat at the table and that local control over education is important,” Zachreson said. “I care about kids in my community.”

He said that school districts should be more responsive to what parents want, instead of approving everything the state endorses. Districts should work with parents to adapt curriculum they find problematic, when allowable, he said. If the district and its parents are opposed to a state requirement, he suggests sponsoring legislation to get it changed.

“We need to untie the knot,” he said.

Rogers said California school district leaders can reduce parent dissatisfaction with school boards if they invite diverse sectors of the community in to help them make decisions instead of making decisions themselves.

“There should be more opportunities for community members to come in to talk about issues of real concern that touch upon young people’s well-being and what kind of future we want to see together,” he said.