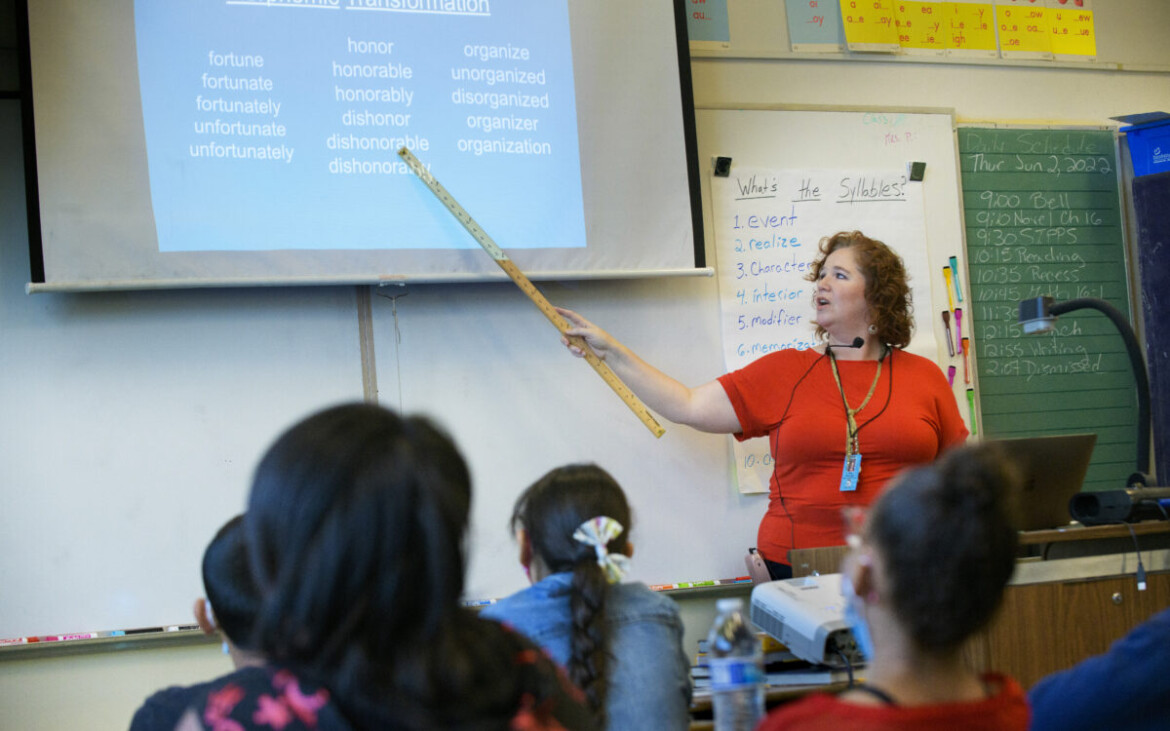 At a time of rising interest nationwide in phonics-focused reading instruction, few California districts are using so-called “science of reading” curricula as their basis for teaching elementary reading, according to a new report.

The California Reading Coalition, which advocates for phonics-based reading instruction, analyzed the 2020-21 English language arts curriculum for 331 of the largest districts in the state to find that 81% of them used the same three core reading programs from the State Board of Education’s 2015 list of pre-approved ELA curricula, and only five districts adopted core curricula that the coalition deemed to be aligned with the “science of reading” movement.

The most-used curricula still incorporate “science of reading” practices and research, but are jampacked with lessons and material in order to serve a wide range of schools. Schools and teachers can benefit from having the freedom to customize their own program, but less experienced teachers or under-resourced schools risk having a less cohesive program, according to the coalition.

The report is the first of its kind to document the reading programs used throughout most of the state. The California Department of Education doesn’t track or report which curricula districts use, or judge their effectiveness, which California Reading Coalition founder Todd Collins said is a key step toward improving students’ literacy rates.

“All over the country and the world people are examining how they teach reading, and realizing that a lot of reading instruction isn’t nearly as effective as we need it to be,” Collins said in an interview. “Getting the curriculum piece right is one of the pillars of any successful reading program, and if we don’t understand the landscape, it’s really hard to say if we’re doing a good job or not.”

Districts aren’t required to pick from the list of pre-approved curricula, but any other curriculum they choose must be aligned to state standards and undergo a teacher-involved review process. The survey shows that despite having the option, few districts have veered from the list.

The curricula that the coalition deems to be aligned with “science of reading” aren’t on the list because several weren’t around when it was adopted in 2015, and most are from smaller publishers that couldn’t meet the requirements for California state adoption, the report said.

“California has created a de-facto statewide standard for teaching reading, without the benefit of formal discussion or policymaking,” the report said.

The coalition calls on the California Department of Education to collect and publicly release information on core curriculum, as well as supplemental curriculum, reading intervention programs and assessment usage from all districts and present that information to the Legislature and the State Board of Education. Collins said this would give districts a better perspective on whether they are using the best curriculum.

The report also calls on the California Department of Education and State Board of Education to issue guidance to districts to use federal Covid relief funds to update their core and supplementary English language arts materials.

“California districts are awash in once-in-a-generation funding, during a time of rapid change across the world in how reading is taught,” the report said.

The 331 districts analyzed in the report include every elementary and unified school district with either 5,000 or more students or with 100 or more low-income Latino third graders. The sample districts enroll 72% of all California K-12 students, according to the report.

About 40% of the districts, 132, used McGraw Hill Education’s Wonders program for elementary English language arts, which the publisher describes as “designed to foster a love of reading in all children through exploration of text and daily development of their skills as readers, writers, speakers and active listeners.”

EdReports, an independent organization that publishes expert reviews on instructional materials that are often considered by districts and committees in decisions regarding textbooks and curriculum, considered Wonders to have met expectations in all its review categories in 2020.

About 32%, 107 districts, used Benchmark Education’s Benchmark Advance program, which the company says “provides a cohesive structure for the development of literacy skills and content knowledge.”

About 9%, 31 districts, used the Journeys program by Houghton Mifflin Harcourt, which the company says uses “the latest research on what makes literacy instruction effective” to turn students into “confident readers and writers.”

The three programs were evaluated by volunteer language arts and literacy experts, classroom teachers, administrators, parents and university professors before being approved by the State Board of Education for the 2015-16 school year. Each was found to align with California Common Core State Standards, include assessments for measuring what students know and to guide instruction, provide access to all students, and include a road map for teachers to follow when planning instruction.

The benefit to EL Education and other curriculum that the coalition deemed to be aligned with the “science of reading” is that the lessons are more scripted, Collins said, which reduces the amount of extra work the teacher has to do. While EL Education doesn’t consider its curriculum a script, standardized lesson plans in general have long been criticized by teachers for stifling creativity.

The “science of reading” is a loosely defined term that generally refers to literacy instruction that heavily emphasizes phonics, based on growing research showing that learning to read is not a natural process for children, unlike learning how to talk.

Science of reading supporters often butt heads with supporters of the “balanced literacy” approach to reading instruction, which also prioritizes phonics instruction but limits the amount of time spent on it in order to allow students to explore literature and grow their interest in reading.

Whether a curriculum is balanced literacy or science of reading, however, depends on who is being asked. The California Reading Coalition report says the top three reading curricula are “primarily used as balanced literacy programs, the dominant approach to reading instruction in California;” but McGraw Hill lists Wonders as being “grounded in the Science of Reading,” and Benchmark Education lists Benchmark Advance as “aligned with Science of Reading research.”

McGraw Hill’s webpage on the science of reading says that the body of research is ever-changing and “does not exist in any one program or book.” Science of Reading research focuses on practices, not specific curricula, McGraw Hill said, though some organizations have their own rubrics for which curricula are best supported by the research. States including Florida, North Carolina, Tennessee, Mississippi and Colorado have passed laws requiring science of reading practices to be used in elementary literacy instruction and also have their own rubrics for which programs are more aligned with the research. States and districts elsewhere are also committing to use federal Covid relief funds to implement science of reading practices.

“A certain program may be better aligned to the Science of Reading based on the practices that it employs to teach the key areas of reading, but no program is a ‘Science of Reading’ program,” McGraw Hill said.

Even Lucy Calkins’ quintessential balanced literacy curriculum Teachers College Reading, Writing and Phonics Units of Study was rewritten this year in response to science of reading research. Units of Study was used in 24 of the districts, and also isn’t on the state’s list of pre-approved reading curricula.

The coalition’s report considers EL Education, Core Knowledge Language Arts and Wit & Wisdom to be the only science of reading core curricula used in California, since they are among the six curricula identified by nonprofit consulting firm StandardsWork’s Knowledge Matters Campaign as “knowledge-building curricula.”

EL Education has been steadily growing in popularity throughout the country, in part due to it being a nonprofit and offering districts its curriculum for free. Districts still have to purchase textbooks and other instructional materials, though.

Oakland Unified was the first California district to have adopted EL Education as its core curriculum for elementary English language arts. Amy Bailey, EL Education’s chief content and growth officer, said Mount Pleasant Elementary School District in San Jose also just partnered with the organization. Bailey said El Education “has a lot of traction in the (California) market now.” The organization had a 32% increase in inquiries this year from California districts, she said.

Collins said similar programs are just beginning to “snowball.” But being smaller publishers, they struggle to compete against larger companies, and California districts may be hesitant to switch their English/Language arts curriculum to one that’s relatively obscure.

“It’s very hard to be the first district on the block to buy a curriculum that nobody else is using,” Collins said. “It’s different and uncomfortable from what most people do. They want to talk to references of districts that look like theirs, but there are only so few.”

After analyzing which reading curriculums the 331 largest school districts were using, the California Reading Coalition sent the districts a survey on what additional tools they use for elementary literacy instruction. Of the 144 districts that responded, nearly half reported that they did not have district-wide reading supplements – materials designed to offer extra focus on specific skills or practices. The supplements that the districts did use were focused on foundational skills and phonics, according to the report.

The survey also found that districts use a wide variety of assessments to gauge how students are doing, including iReady, Fountas and Pinell Benchmark Assessment System, DIBELS and STAR.

The coalition suggests a narrower set of assessments might serve students better since other states require districts to choose from a limited number of assessment tools and publish their results.

“As focus increases on early literacy, California will need to grapple with how to track student achievement, particularly for the earliest grades, and provide more transparency and comparability to districts and communities,” the report said.