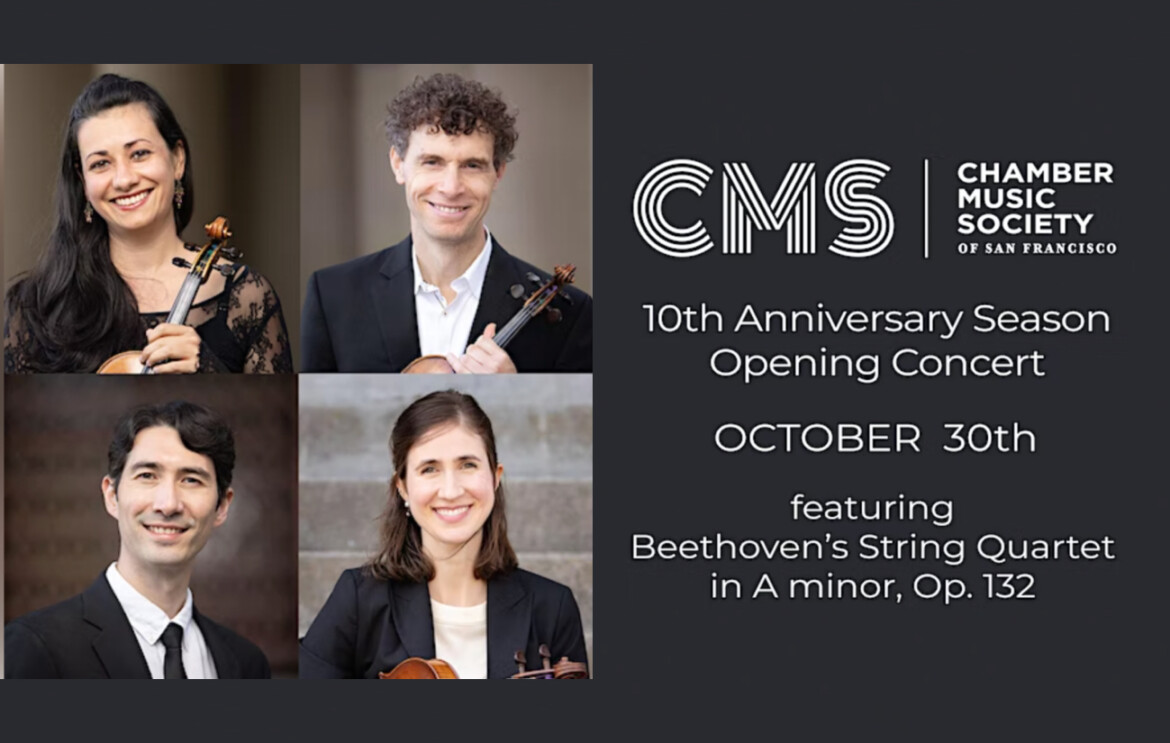 The Chamber Music Society of San Francisco distinguishes itself by bringing rich repertoire and impeccably performed programs to local audiences throughout the Bay Area. Launching its 10th anniversary season on October 30 at Piedmont Center for the Arts, the 90-minute concert postponed from September 17 has the quartet presenting Ludwig van Beethoven’s String Quartet in A minor, Op. 132, along with Wolfgang Amadeus Mozart’s String Quartet in C Major, K. 465 “Dissonance,” and Valencia, by composer Caroline Shaw.

“We got together and played this because it was on all of our bucket lists,” says Fankuchen in a phone interview. “So there’s that history, but also there’s the history of Beethoven’s late period that is marked by a move inward. From shouts of triumph about conquering music from his mountaintop, as might be said to characterize the previous mid-career period, here, he’s looking into his own mind, at his life coming to an end.”

Fankuchen says the work is immensely complex; more complex than any prior work written for string quartet. “It was challenging for the audience of the time also. It’s like with any language. The first time you hear it — I was only 15 when I encountered it for the first time — there are so many different layers of appreciation that are possible. I still hear new things and just think of how many times I’ve played it. It’s an open door into more beauty every time I listen to it.”

The second piece on the program is similarly from the later years of Mozart’s too-short life. The roughly 30-minute work is intricate in terms of counter melodies and chromatic tones that create dissonance. In this way it is starkly different from other works written during the Classical era. “The Baroque period before that Classical period actually had dissonance, but it largely went away. Mozart brings that back with dissonance creating tension, right from the beginning and mostly in the first movement. I have no idea why he wrote this way. Haydn didn’t do this, although he wrote multiple big, moving pieces that were about emotional content, more than about showing off, as they had been previously. I guess it had to be Mozart who was going to be the kind of composer to challenge those harmonic structures and use dissonance.”

Speaking about Valencia, Fankuchen shares a personal story and lively description of the work. “When you see a piece called Valencia, you first thought about Valencia the place. (Valencia is a port city in Spain.) But this is actually about an orange. The work is vividly constructed, using harmonics in the violin and all the other instruments too. It creates an open, pure sound. To me it sounds like little explosions, like when you bite a slice of an orange and the juice pops in your mouth.”

He says Shaw writes instinctively and naturally for string instruments and performing the piece therefore “falls into your hands easily.” He and the other members of the quartet focus less on its technical or artistic challenges and instead appreciate her adept composing and the way in which the tones project vibrant energy. “The violins are making arpeggios and there’s a quickness to that. When the cello and viola come in, I think of the pizzicati in the cello as the pulp of an orange, popping and bursting with flavor.”

As he and the other musicians prepare for a special anniversary season and reflect on the last ten years, Fankuchen says, “We’ve been doing live concerts for almost a year now, so coming out of covid feels less (prescient). But that first time with a live audience, it was amazing, cathartic — and strangely normal. Performing in Piedmont? It’s a fantastic, beautiful acoustic space for chamber music. You feel the energy of the audience and they feel yours. You’re connected in a way you can never be in a large concert hall. As I think about our managing to stay together for ten years, it feels good that we’ve made it, we still love playing music together, and that we’re growing. This is our true love; playing quartet music for live audiences and people who we have come to know as acquaintances.”