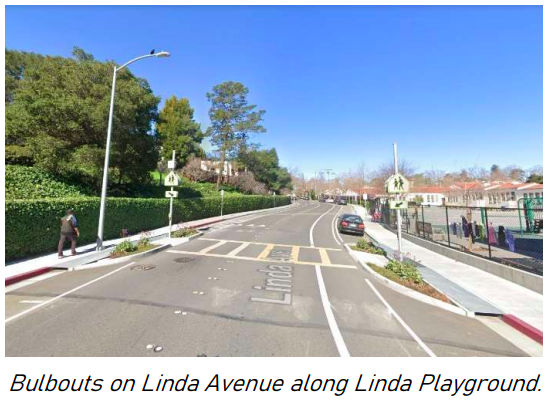 Plans to improve pedestrian safety are back in the news as neighbors react to a pending loss of parking and a late notice of a public meeting.

The City Council this week approved going ahead with final design plans for pedestrian safety improvements at two intersections along Oakland Avenue, one of the city’s few heavily traveled arterial streets.

The project also calls for high-visibility crosswalks, new pedestrian ramps, improved bright yellow “rectangular rapid flashing beacons,” along with refreshed street paint and new signage at both of those intersections. Like previously built bulb-outs in Piedmont, these designs also allow for the installation of landscaping.

There are several pedestrian crossings on Oakland Avenue, one of Piedmont’s main arterial routes. Both the 2014 Piedmont Pedestrian and Bicycle Master Plan and the 2021 Piedmont Safer Streets Plan identified both the Jerome Avenue and El Cerrito Avenue intersections as major crossing points for local school students. The El Cerrito crossing typically has a crossing guard stationed; the Jerome Avenue one does not.

“This is such a strong move in the right direction, especially for all the school kids who cross there every day,” said Mayor Teddy Gray King. She, however, did not vote on the design plans; neither did Councilwoman Conna McCarthy. Both live within 500 feet of one of the two intersections, and recused themselves from the vote. Vice Mayor Tim Rood and Councilmembers Jen Cavenaugh and Betsy Smegal Anderson all voted in favor of proceeding with the final design plans.

The City Council approved a contract with Coastland Engineers in December 2018 to design these crossing improvements. The Council reviewed preliminary designs for these intersections in April 2019.

The preliminary estimated cost for the design and construction of both intersections is $400,000, which includes a 10 percent construction contingency. That amount could be adjusted.

Part of that cost, Public Works Director Daniel Gonzales told the council, will come from Alameda County Measure B transportation tax money. Other money figures to come from the Piedmont Beautification Foundation, whose president Gayle Lambert told the council the foundation is interested in fundraising for the project.