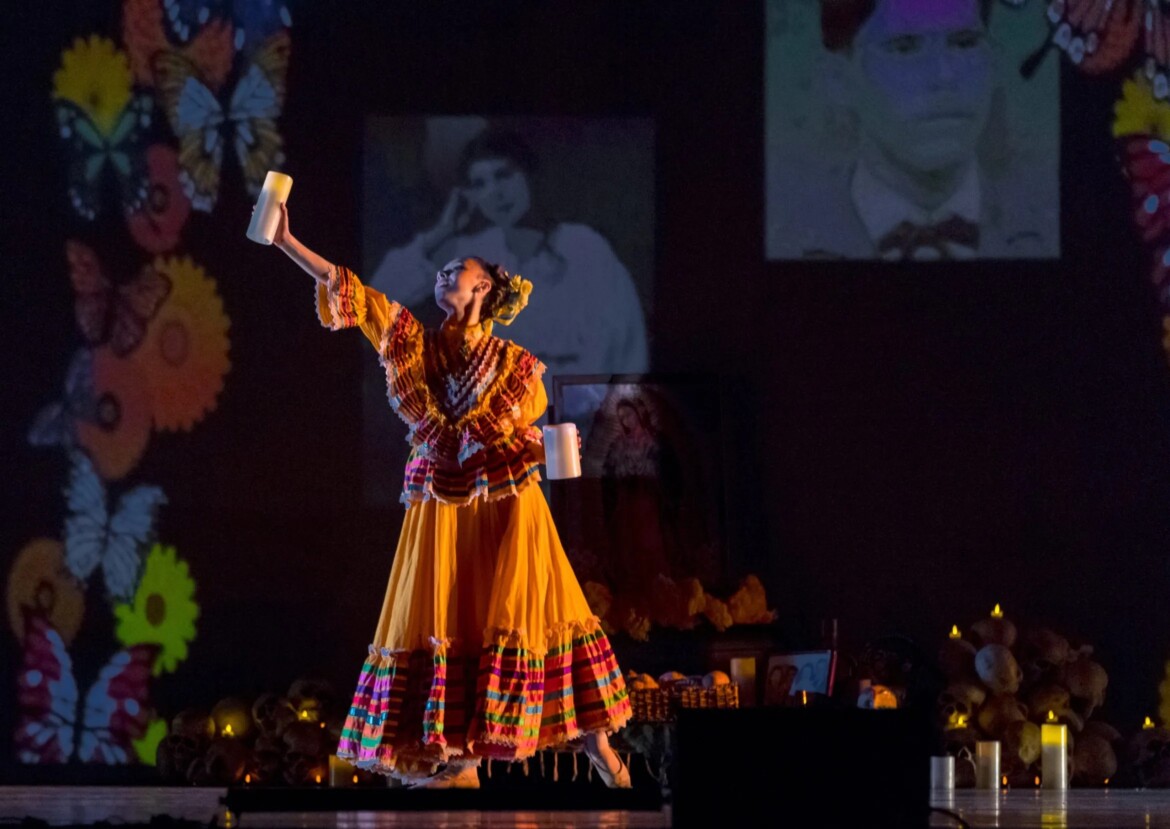 Jazmine Quezada stars as a young girl who meets up with ancestors in a dream in Graham Lustig's Day of the Dead-themed "Luna Mexicana." (John Hefti/Oakland Ballet)

Freebie of the week: “C’mon in!” That’s the big-hearted message the San Francisco Opera Company is sending out to the entire Bay Area community, as the company prepares to throw open the doors of their War Memorial digs at 301 Van Ness for a free open house on Sunday from 9:30 a.m. to 3:30 p.m.

This will be the 90th such party in the 100-year history of the company, and every floor of the historic building will be mounting events to educate and entertain all comers, from the smallest tykes to veteran opera-goers with decades of experience in the house. In the main lobby, there will be a scavenger hunt kickoff (with prizes), sign-ups for an Opera House tour and demonstrations of stagecraft from the company’s props crew.

On the main stage, there will be opportunities for selfies and 30-minute musical demonstrations at 12:15 and 3:15 p.m. with the Opera Orchestra, Chorus and soloists performing. On the mezzanine, there will be a showcase of historic opera costumes and hourlong, family-friendly showings of condensed operas, including “Cinderella,” “The Magic Flute,” “Barber of Seville” and “Elixir of Love.” The Grand Tier (second floor) level will be holding hair, wig and makeup demos; an instrument show-and-tell; and several “how-to-direct-an-opera-scene” sessions which will call on audience volunteers to participate. Up on the Dress Circle (third floor), conducting lessons will be in session, along with opportunities to handcraft your own stage props or to “ask-me-anything” of Opera General Director Matthew Shilvock.

Food and drink will be available to purchase in the courtyard and in the basement cafe throughout the day. Register to participate and find out the safety protocols in place at sfopera.com/openhouse.

Not that Leonardo:  I’m sure your first impulse, on hearing that the Ars Minerva production company is presenting the modern-day world premiere of Leonardo Vinci’s 1725 opera “Astianatte” this weekend, is to query, “uh, duh, what happened to the ‘da’ ?

But hold that thought.

Vinci was an Italian composer who lived two full centuries after that other Leonardo, and he is credited with helping to establish the Neapolitan style with the 40-some works he crafted. “Astianatte,” meanwhile, is a rather wretched tale based on a section from Homer’s “The Illiad” involving a threat to the life of the young child of Andromaca (aka Andromache), widow of the slain Trojan hero Hector. It has the usual panoply of operatic themes: sex, death, tragedy, betrayal, etc.

The revival at the ODC Theater in San Francisco stars contralto Jasmine Johnson as Andromaca, mezzo-sopranos Deborah Martínez Rosengaus and Nika Printz as Piro and Oreste, respectively, and soprano Aura Veruni as Ermione.

Performance times are 7:30 p.m. Friday and Saturday and 2:30 p.m. Sunday in the theater at 3153 17th St. Tickets, $27-$250 (with the upper limit price including a post-performance gala with the artists), are obtainable at 415-863-9834 or odc.dance/tickets. Ars Minerva, by the way, is a nine-year-old company that specializes in the revival and preservation of long-forgotten operas of the Baroque era, with Ziani’s “La Circe” and Pallavicino’s “Messalini” among its earlier credits. Find out more at arsminerva.org.

Yet another freebie: The Trolley Dances are back for their 19th rendition this weekend, sporting the same concept that is as adorable as it is ingenious. We mean, how can you not like the idea of taking a ride through the lovely Fog City and being entertained at certain stops by some of the best dancers San Francisco has to offer?

The event is the brainchild of Epiphany Dance Theatre, known for its provocative, often site-specific works that advocate social change and compassion.

And this year, they’re taking it on the road.

The event is part performance and part celebration, combining a dance choreographed by company artistic director Graham Lustig with food, live music, traditional Dia de los Muertos costumes and decorations, and more. Reportedly, Lustig had danced in Mexico City during his performing days and came away with a love and respect for Mexico’s arts and culture.

“Luna Mexicana” tells the story of a young Mexican girl who falls asleep in a graveyard while administering to the family’s holiday ofrenda, and during her dream she dances with her ancestors. Lustig first created the work in 2010 and revised and lengthened it in 2016, after he had joined Oakland Ballet, in response to the disheartening level of anti-immigrant, anti-Latin rhetoric he was witnessing in the media.

Slasher comedy: Like most branches of live entertainment, the Bay Area’s impressive and lively improv comedy scene took a hit during the pandemic. But there are signs of life. Organizers say the massive two-week comedy bonanza known as Sketchfest (which features all kinds of comedy) will be back in January, with a full slate of shows. ComedySportz in San Jose plans to reopen soon in a new theater, and venues such as San Francisco’s PianoFight offer improv shows on a regular basis.

Then there is Killing My Lobster, the improv comedy troupe that has been serving up zany sketch comedy since it opened in a converted Mission district office some 25 years ago. And now the company is back with a new show that spoofs Halloween, slasher movies and the 1980s in general. “Freddy Krueger’s Day Off,” billed as “sketch comedy that’s spookier than Reaganomics,” will undoubtedly roast a great many things we hold dear, such as the titular scar-faced mass murderer, Ferris Bueller, over-application of hair products, aerobic workouts and much more.

Performances are 8 p.m. Thursday through Saturday and Oct. 27-29 at Exit Theatre – the venerable Tenderloin venue at 156 Eddy St. that will close by the end of the year. Tickets for “Freddy Krueger” are $16-$40. Go to www.killingmylobster.com.