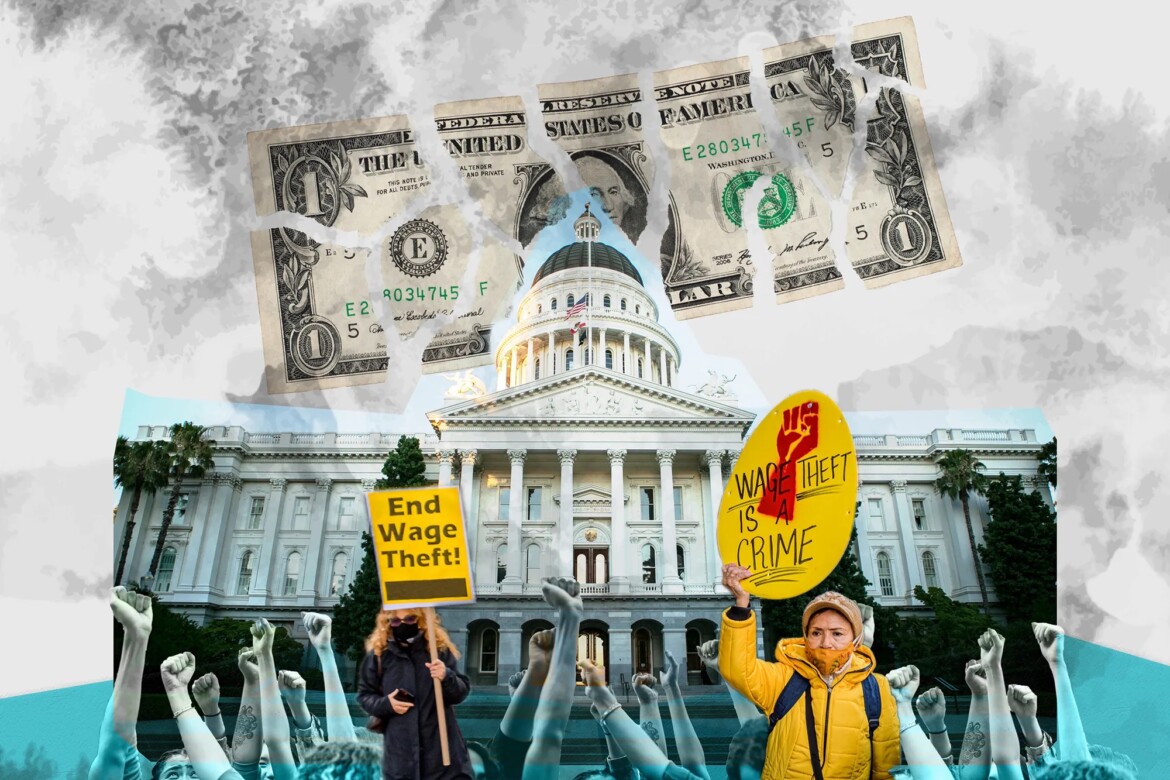 For decades California’s lawmakers and regulators have taken aim at employers who rob their workers of pay, overtime premiums, tips and other forms of compensation.

Just last year, legislators made certain instances of wage theft a felony. They also fixed their sights on wage theft in the garment industry, eliminating some longstanding pay practices that often resulted in workers being paid below the minimum wage.

Earlier this month, California Labor Commissioner Lilia García-Brower recovered $282,000 in stolen wages and penalties for 22 workers of a Long Beach car wash using a law enacted in January that empowers her office to place liens on the property of problematic worksites.

California’s laws targeting wage theft — which is the failure by bosses to pay workers what they are owed — make it a leader among states, national labor experts say. But in practice, enforcing those laws has not been easy.

State officials and lawmakers say the Labor Commissioner’s office, the California agency overseeing wage and hour violations, has been too short-staffed to do its job, a problem that worsened during the pandemic and subsequent labor shortage.

Assemblymember Ash Kalra, a San Jose Democrat who chairs the Assembly’s labor committee, said the Labor Commissioner does not have enough agents or other workers to process all of the wage claims made by California workers effectively.

The Labor Commissioner’s budget this year is $166 million, enough funding for nearly 840 positions.

“We need to put more urgency into it,” Kalra said, ”and that could include having hiring bonuses, whatever it takes to increase the staffing, because it’s unacceptable — the current state of affairs. If we really care about these workers, we need to show it.”

When it comes to recruiting workers “it’s three strikes against them right now, just the government in general,” said Patrick Murphy, director of resource equity and public finance at The Opportunity Institute, a nonprofit that studies poverty and racial inequality in California. “It’s the nature of government, the tight labor market, and then the specialization that goes with these jobs.”

The state’s hiring and retention issues at agencies enforcing labor laws have existed for years. The Little Hoover Commission, California’s bipartisan oversight agency, studied wage theft in 2015 as part of an investigation of California’s underground economy.

The study found that state investigators across agencies are paid less than those in police forces and often require more training and education. The state’s hiring process for such jobs can take up to a year, the report found, making hiring frustrating for all parties.

“We’re just not a competitive employer,” said Krystal Beckham, a project manager with the commission who led the study. “You can see that when it comes to enforcement in the underground economy.”

California stands out among states for its efforts and policies to tackle wage theft given its union density, number of worker centers and public dollars committed to combating the problem, said David Cooper, a researcher who has studied wage theft at the left-leaning Economic Policy Institute, which is based in Washington, D.C.

The state also has 47 worker centers, more than any other, according to a recent report by the Worker Empowerment Research Network, a national collection of labor experts. Worker centers are community-based organizations providing training and support for low-income workers. California’s labor offices have partnered with a coalition of 17 centers to bring wage theft investigations in certain industries.

Also workers can file lawsuits against employers through California’s Private Attorneys General Act (PAGA), which gives workers the same powers as the state to sue employers and recover penalties on behalf of coworkers. Last year the Department of Industrial Relations received 6,501 notices of new PAGA suits, according to data provided to CalMatters in response to a records request.

The size of California’s economy, its diversity and demographics, also give cover to abusive practices by employers, experts said. The state has a vast service economy, a robust agricultural sector and one of the nation’s largest immigrant populations, including about 1.7 million undocumented  workers, according to the Migration Policy Institute.

Wage theft typically impacts society’s most vulnerable workers: those with the least education and financial means and the fewest legal protections  —  often those workers are immigrants.

“California has far more immigrants than a lot of other places, and we know that immigrants, and people of color generally, tend to more likely be victims of wage theft,” said Cooper, who is director of the institute’s Economic Analysis and Research Network, which coordinates nearly 60 state and local research and advocacy efforts nationally.

“Immigrants who are either undocumented, or may have family who are undocumented, are not going to speak up as vocally if their rights are being violated.”

Cooper said the thousands of wage theft claims filed in California each year are likely an undercount of stolen pay cases.

On the other hand, the California Chamber of Commerce said those claims represent only a fragment of a percent of California’s $1 trillion-a-year payroll, and the vast majority of claims are misunderstandings of California law.

CalChamber CEO Jennifer Barrera, who represented employers as an attorney before joining the business group, said wage theft claims at large employers often come down to a “good faith dispute” about whether a worker was properly classified. With small employers, there often was a lack of education about labor laws, she said.

“When you got into the smaller employers, it was just a lack of understanding of what actually the law required but thinking that they were doing things right,” she said.

California’s policymakers over the years have focused on accountability in cases of wage theft. The state, for instance, requires businesses in certain industries, such as car washes and garment manufacturers, to register with the state and post bonds with the state, so there are funds available to recoup stolen wages for workers.

The Legislature also has taken on the growing prevalence of contracting and subcontracting in various industries by passing laws that make the “parent” employer or company responsible for a contractor’s labor violations.

“Su lifted up an entirely different way of thinking about the role of government and was not afraid to say, ‘We are not neutral. That is not our role. We are not umpires,’” said Janice Fine, professor of labor studies and employment relations at Rutgers University. “We are advocates for worker rights.”

Su, now deputy secretary of labor in President Biden’s administration, through a spokesman declined to comment.

Some experts have argued that gig economy companies such as Uber Technologies Inc. and Lyft Inc. have committed wholesale wage theft by classifying their workers as contractors rather than employees.

California, the birthplace of the gig economy, has been at the forefront of those battles.

In 2019, California Gov. Gavin Newsom signed legislation intended to classify some independent contractors as employees. In response, Uber, Lyft and other gig giants spent more than $200 million on a successful ballot measure, Proposition 22, that exempted them from that law. The ballot measure was ruled unconstitutional last year but remains in place while the case is being appealed.

In 2020, García-Brower’s office sued the ride-sharing companies, accusing them of “systemic wage theft” for misclassifying workers and failing to meet their obligations under California law, including paying minimum wage, overtime, providing rest breaks and other allegations. That suit also remains outstanding, but the debate over worker classification is now a national one. On Oct. 11, the Biden administration released a proposal that would make it easier for contract workers to be classified as employees, giving them federal labor protections.

In California, García-Brower, who was appointed by Newsom, has continued the pro-worker philosophy of her agency.  She was a former executive director of the Maintenance Cooperation Trust Fund, a Los Angeles- based organization that investigates wage theft and other abuses in the janitorial industry.

“My number one goal is to improve our ability to enforce the law, to make workers’ protections real in a very practical way for the poorest workers, for those vulnerable communities,” García-Brower said in an interview with CalMatters last month.

Most pressing for García-Brower is addressing backlogs for those workers waiting to have their wage claims heard. For workers who don’t drop or settle their cases, the state averages 505 days to decide an individual worker’s wage claim, data from 2017 to 2021 show. That is much longer than the 135-day maximum set by state law.

“We’re having these massive budget surpluses; if we can’t give them the resources now, then it may just show that it’s not a priority,” he said. “I really hope that’s not the case.”

Staff reporters Lil Kalish and Grace Gedye contributed to this report. Julie Watts is an investigative journalist at CBS13 in Sacramento.

This article is part of the California Divide project examining income inequality and economic survival in California.