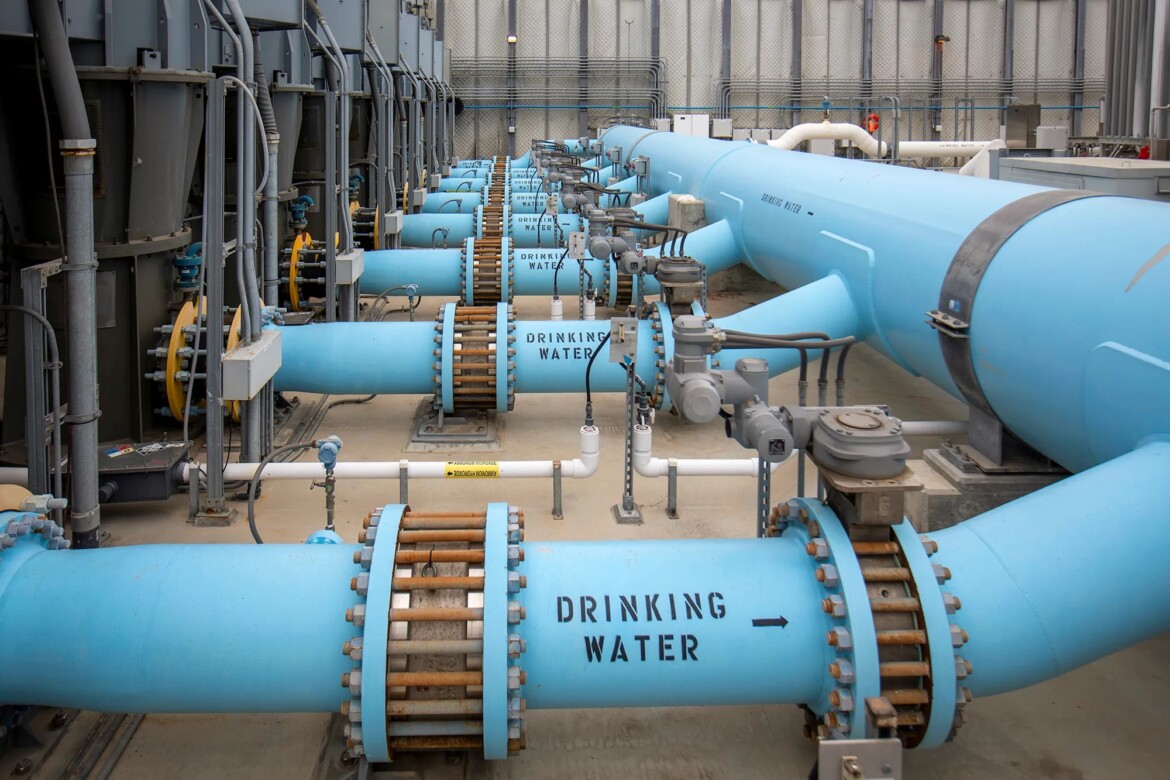 The California Coastal Commission today green-lit a $140 million desalination plant in south Orange County’s Dana Point, a pivot from its unanimous rejection in May of another controversial desalination project in the county.

The decision indicates that state regulators see a place for new seawater desalination plants in California to bolster water supplies, particularly for coastal areas with few water sources of their own.

“We believe that the project before you today, although not perfect, provides a solid example that we can use in planning for future desalination,” Kate Huckelbridge, a senior deputy director, told the Coastal Commission.

Wells running from Doheny State Beach would pull water from beneath the ocean floor, which would then be piped to the desalination facility inland of the Pacific Coast Highway in Dana Point.

The Coastal Commission cited the project’s efforts to avoid harming marine life, as well as the need to buffer local water supplies. These communities rely almost entirely on water imported from Northern California and the Colorado River, rendering them vulnerable to drought and earthquakes that could damage critical water lines.

“I feel that the commission has been under kind of a cloud of doubt from the people who believe in desal — that we were somehow going to turn down any project whether it was a good one or a bad one,” said commissioner Dayna Bochco. “And I’m glad now that we can show the other agencies and whoever else is interested in this that we are fully supportive of desal, when it’s a good project.”

Water districts voiced support for the project, with the Santa Margarita Water District calling it “an important demonstration project to show that small-scale, distributed ocean desalination plants are feasible not only in South Orange County, but also in other areas of … California.”

But a coalition of environmental groups and the Society of Native Nations raised concerns about the environmental impacts and questioned the need for the project, warning that the plant’s discharge could pollute waters frequented by marine life, such as whales and dolphins.

“We cannot afford to further harm the environment; we cannot continue killing marine life, and exposing toxic waste to so many,” they wrote in a letter to the Coastal Commission.

The environmental groups urged the Coastal Commission to consider alternatives, such as increased conservation, stormwater capture and more water recycling, and warned that well intakes planned for Doheny State Park “could impact users and beneficial uses of the Doheny State Park and its adjacent marine waters.”

Rick Shintaku, general manager for the South Coast Water District, agreed that “recycling and conservation will always be the first solution. But if you need additional reliability, as we show in South Orange County, it’s a solution. And it’s a solution that could resolve a lot of the reliability issues that we specifically have in our area.”

What’s next for Doheny plant

Dana Point is known for its tidepools — a sensitive habitat for crabs, mussels, snails, fish and other marine life that is protected under state law. Tidepools in California have been severely damaged by human disturbance, development and climate change.

Before construction can begin, the Doheny plant will need a lease from the California State Lands Commission. Construction is expected to take approximately three years, according to water district spokesperson Sheena Johnson, and the district has already secured more than $32 million in federal and state grants.

The plant is designed to produce 5 million gallons of water per day. Shintaku says his district needs only 2 million gallons per day from the plant — enough to supply about 40% of its drinking water needs. The rest, he said, will likely go to other water agencies: Laguna Beach County Water District and the city of San Clemente have sent letters of interest that the district shared with CalMatters.

The water will be pricier than imported water, the Coastal Commission’s staff report says — costing about 20% more at $1,479 per acre foot. Though “much lower than identified for other recent seawater desalination projects in California,” it’s expected to increase monthly costs by about $2 to $7 per household.

At the hearing today, staff warned that the price estimates are based on a number of uncertain assumptions, including sales of the extra water to external partners that have not yet been identified. “Because of this uncertainty, it’s possible that the cost could be closer to $15 a month per household,” environmental justice analyst Javier Padilla Reyes told the commission, which could affect low-income customers already burdened by pollution.

Staff called for a study on impacts to low-income customers and potential strategies for alleviating them, which Reyes said the water district had agreed to do.

The vote comes as drought continues to grip California and the broader Colorado River Basin, spotlighting the vulnerability of Southern California’s imported water supplies. Desalination offers the possibility of turning salty seawater into drinking water — but its promise has been tempered by concerns about cost, energy demands, and environmental impacts.

Huckelbridge noted that Newsom’s blueprint for bolstering California’s water supply, unveiled in August, included desalination and said that meeting California’s future water needs “will require all the tools in the toolbox.”

But, she added, “as pointed out in the strategy, it is critical that we tackle this crisis in ways that protect our coastal and ocean resources and provide safe and equitable drinking water for all Californians.”

Several desalination facilities already pump out drinking water along California’s coast. But in a high-profile decision in May, the Coastal Commission rejected Poseidon Water’s proposed $1.4-billion plant in Huntington Beach despite California Gov. Gavin Newsom’s vocal support of the project. The rejection came, in part because of risks to marine life and the lack of local demand for the pricey water.

Coastal Commission Executive Director Jack Ainsworth said at the time that the denial of the Huntington Beach project “does not mean that we’re setting the stage for the denial of all desal facilities or other critical infrastructures across the state … every project has a different set of circumstances, facts and context.”

Unlike Poseidon’s proposed Huntington Beach plant to the north, the Doheny plant would suck in seawater from wells buried beneath the ocean’s floor — putting a natural barrier between the intakes and marine creatures.

There is still some possible risk of disruption to creatures living deeper in the sea floor, but Huckelbridge told CalMatters that while the issue needs more research, at this point she and her team don’t view this as a significant impact.

Other possible risks come from the concentrated brine left over by the desalination process that can kill marine life when spit back out into the ocean. But by commingling the discharge with a nearby wastewater treatment plant’s, coastal commission staff says this “substantially reduces the overall effects.”

The hearing was less contentious than the one in May for Poseidon’s Huntington Beach facility, when 200 members of the public, some holding signs and wearing costumes, signed up to speak. But the Doheny plant nevertheless faced substantial opposition in less than an hour of public comment.

Many water districts spoke in support, echoing letters that applauded the effort at bolstering local supplies. So, too, did a representative of the Los Angeles and Orange Counties Building the Construction Trades Council, who called for approval so “our members get on their hard hats, get their work vest on with their tool belts, and we can start to work on this.”

But others pushed back — because of costs, environmental impacts, and access to Doheny State Beach campgrounds.

“The issue that was addressed about water rates and how this will disproportionately impact the communities, especially low-income communities, has not been adequately addressed yet,” said Sonia Diaz on behalf of Outdoor Outreach.

And still others raised concerns that salty discharge from the plant could harm marine life and the environment.

“We believe our ancestors would not only want us to protect the remains and artifacts of our people and relatives, but rather protect the environment and health of the people living today — our children and our children’s children. So for now, it is a no to this project,” said Frankie Orona with the Society of Native Nations.

Lydia Ponce urged the commission to reject the proposal. “I don’t drink Newsom’s Kool-Aid. He is beholden to many donors,” she said. “You are permitting death by several desal permits up and down our coast.”

The decision sets the stage for what’s expected to be a much more controversial vote next month about a desalination project proposed in the Monterey County city of Marina.

Its proposal has also faced far steeper local opposition, including from the city of Marina, where the intakes would be constructed but which would receive no water from the plant.

Coastal Commission staff previously recommended rejecting a previcous proposal for the Monterey County plant, raising concerns about “substantial impacts to environmentally sensitive habitat areas” and “the most significant environmental justice concerns the Commission has considered since … 2019.”

Huckelbridge could say little about the proposal, as she and her colleagues are still evaluating it.

But Marina residents and representatives of the Marina Coast Water District are already gearing up for the vote ahead, fighting the proposed plant even in public comment today.