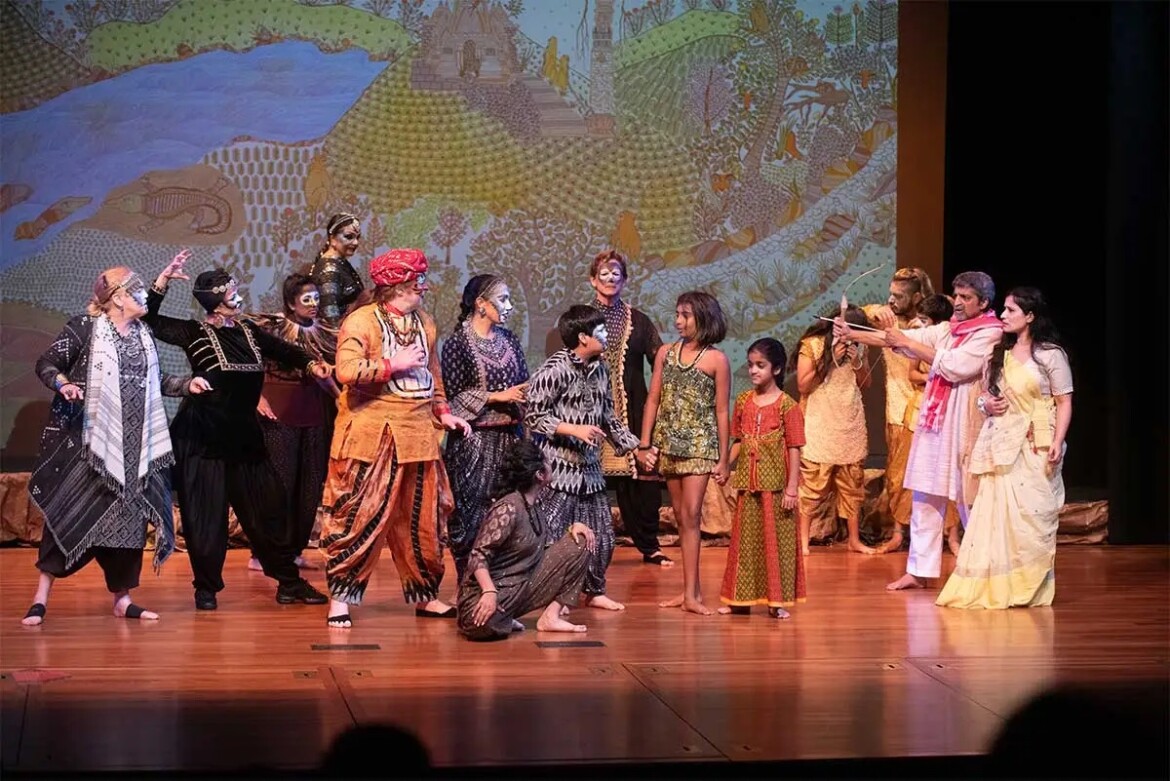 Cast members appear on stage in a scene from EnActe Arts' “The Jungle Book: Rudyard Revised.” The updated look at the Rudyard Kipling classic, told through the eyes of the animals, plays in San Francisco and San Jose this fall. (Photo courtesy of EnActe Arts)

ON OPENING NIGHT at Cubberley Theater, the curtains opened to the strut and swagger of a slighted peacock played brilliantly by actor Brady Voss.

This revisited “Jungle Book” by EnActe Arts asks us to pause and reset our brains a little. Like the bird himself, the version staged in Palo Alto is an audacious and cheeky musical titled “The Jungle Book: Rudyard Revised.”

To take a much-told and retold magnum opus and spin it on its head takes a certain amount of chutzpah, but it appears that Vinita Sud Belani, the director of EnActe, is up to the challenge. The COVID pause of 2020 also gave her project momentum. Belani herself was one of fourteen writers between the age of 6 and 66 who collaborated to write this reimagined version of the Kipling masterpiece. The writers spent three months in a virtual writer’s room studying Kipling’s writings. Informing their overhauled version were the multiple issues skewing the day globally — the pandemic itself, wildfires, tiger extinction, human-wildlife conflict, refugee crises, Black Lives Matter and #MeToo movements, and the push for advancing racial equity in the arts.

According to the team at EnActe, for too many years Jungle Book’s story had been told by the people who lorded over others. What if the animals themselves could speak?

What if Kaa, the Indian rock python, could also narrate the story from his point of view? What if we could see the tiger not for just his ferocity, but also for his steadfast principles — that the laws of the jungle mattered, in order to protect and preserve the species inside the forests?

The lament of the disenfranchised begins early on in this musical. It gives it a global relevance and topicality that certainly eluded the old Disney version. As director Belani told me, the core message of this play is its insistence on “identity, belonging and conservation”. In a world in which “othering” has become the norm, every animal, the human being, too, is keenly aware of the need to belong. The same question has been asked and addressed ad infinitum: How do we live amicably and in relative peace, while safeguarding our uniqueness in the world?

The opening night began with an articulate plea from Krithi Karanth, chief conservation scientist and director at the Centre for Wildlife Studies in India’s Bangalore. She spoke about India’s “inbuilt cultural tolerance” for many of the losses people face for living with wildlife and how this had allowed wildlife to persist even among a billion people. Karanta’s moving opener set the stage for the voices of all the animals in the narrative that followed.

EnActe’s play is at its most brilliant in the way in which it lets Kipling see the follies in his own oeuvre. “Rudy” Kipling makes an early appearance in the play when he’s upbraided by the preening peacock for having left him out of the original story despite his status as India’s national bird.

“Jungle Book: Rudyard Revisited” was memorable also for its makeover of Kaa, the snake. Guest artiste — Dr. Anita Ratnam — slithers into the show as a terrific narrator whose interpretation of India’s fearsome reptile has so much gravitas.

“The writers’ room had done the initial work, giving the snake more dimension, intrigue, an ageless wisdom and the ability to foresee and anticipate,” Ratnam said. She found herself bringing the character of Kaa to life in a whole new way, however, reminding the audience of the power of the snake as a goddess in Indian religious and spiritual life. Ratnam’s Kaa is clairvoyant and deliberate, one who spars with the tiger on an equal footing. In contrast, in the popular Disney version, Kaa is often pinned down by the tiger’s claws and literally pressed and poked into action simply for comic relief.

Disney’s “Jungle Book” is obviously an absolute delight. We built our own family in the early 1990s, and Baloo, Kaa, Sher Khan and Mowgli made mealtimes with my toddler daughter less of a challenge. With each new watching of Disney’s creation, there was always something even more intriguing to uncover.

Yet, the folks at EnActe Arts urge us to look beyond the slapstick and to make us reckon with how Disney’s version too, after all, is the version of the colonizer, that it’s the story of the brown man as told by the white man, that it’s also quite removed from the version written by Rudyard Kipling himself.

In contemporary times, the author’s own reputation has been sullied. Some have dubbed him a racist and an imperialist, quoting his poem — “The White Man’s Burden” — as evidence enough. The creators of this revised version of the play exhort us to question Kipling’s beliefs. It’s not clear whether we can view his works in absolute terms, notes the team at EnActe: “How much of his vastly complicated views were his own and how much was he the product of his time?”

A product of his time

Like many children of the Raj born in India, much as he loved India, the English novelist and poet came to represent the colonial enterprise. It’s clear from his writings that he was berated — as were many English children born and raised in India during the Raj — when he spoke the servant’s tongue. Like them, he too was packed off to England for an education just in case he should go native.

We all are, to some degree, products of our time. Despite the accusations leveled against the late writer, I do believe that Kipling’s love of India and his empathy for the hapless folk of India shine through in many of his short stories as well as his poetry. In my view, works such as “Gunga Din” express the duality in Kipling and certainly demonstrate his empathy towards the downtrodden.

By the time the curtains fell on opening night, “Jungle Book: Rudyard Revisited” seemed to have elevated the craftsmanship of the original, too, in some way. It was clear that Rudy too had been exonerated somewhat because he had granted a stage to India’s fauna. Here was a show that was as egalitarian as one could imagine, where the cast was diverse, the writing was shared, and the content bursting with a deft interplay between thought, empathy and humor. This was also a show rooted in the beauty of the Indian painting style known as Madhubani, with stunning backdrops by artist Avinash Karn that alone could justify the price of the ticket. With saxophonist George Brooks’ compositions blending jazz and Indian classical music, and choreographers Aparna Sindhoor and Anil Natyaveda marshaling the thunder and grace of the wild using dance and martial arts, the production was an explosion of color and sound.

Everything was not perfect on opening night. Intimate as it was, the lack of amplification sometimes presented as a lack of clarity in the lyrics. Sometimes individual voices were drowned out by the music in the background. Some singers couldn’t be heard at all. The presence of children in the cast — germane and charming to a show such as this — also tended to make the show a little unpredictable and chaotic because the youngest ones didn’t always ensure that they were audible.

Despite these drawbacks, “Jungle Book: Rudyard Revisited” had so much heart. It felt like a genuine exploration of our common humanity. Above all, as Belani says, the musical reminds us that we are all the same, after all: “We share just one planet. Let us think and be still.” The refrain at the end of the musical sums it up: “The world is large, we are small.”