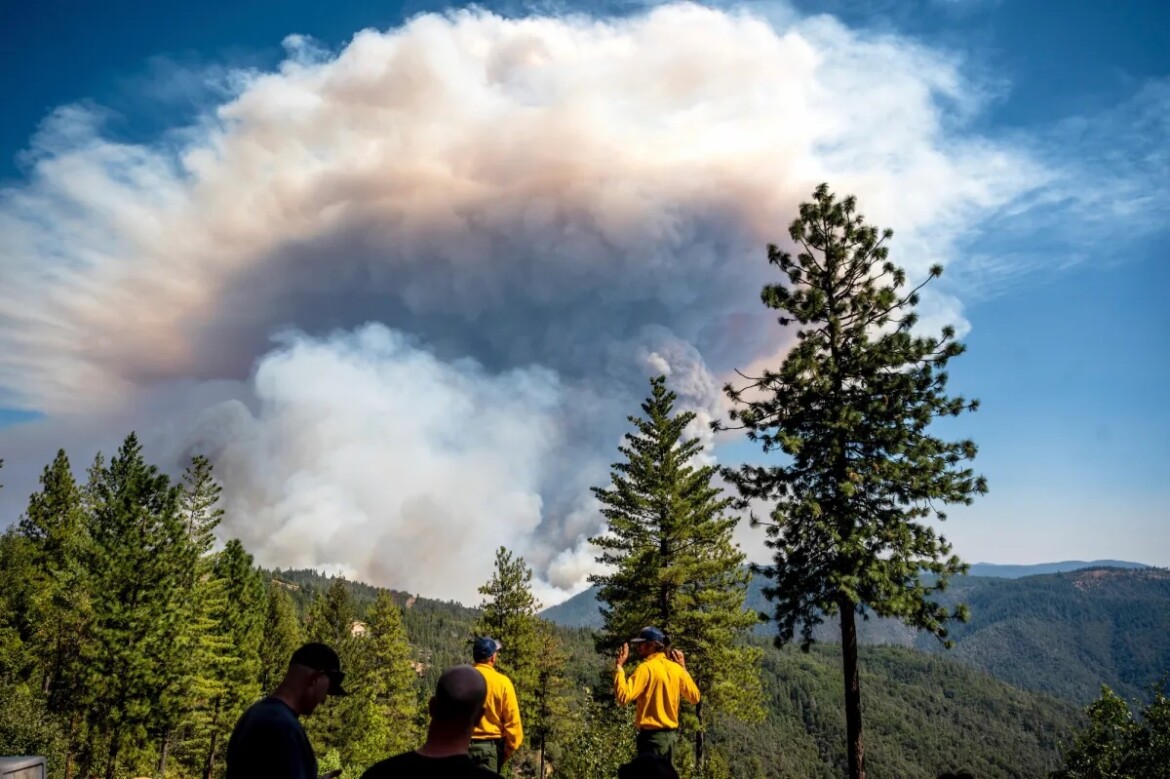 Firefighters in the Foresthill community of Placer County watch as a plume rises from the Mosquito Fire on Sept. 8, 2022. Photo by Noah Berger, AP Photo

Another day, another state of emergency.

Gov. Gavin Newsom on Thursday proclaimed a state of emergency in Riverside County due to the Fairview Fire — which as of Friday afternoon had charred nearly 28,000 acres, killed at least two people, threatened 2,500 structures and remained just 5% contained after growing half the size of San Francisco in one day — and in El Dorado and Placer counties due to the Mosquito Fire.

State fire officials said the Mosquito Fire exhibited “extreme fire behavior and growth” as it exploded in size to 30,000 acres by Friday afternoon. The blaze had prompted thousands of evacuations, destroyed some homes and was threatening at least 1,000 structures, including the historic Gold Rush town of Michigan Bluff and critical infrastructure such as a hydroelectric powerhouse, a dam, cell phone towers and large power lines. It remained 0% contained.

The metastasizing fires didn’t bode well for a state already under a thrice-extended state of emergency, a Stage 2 energy emergency alert later downgraded to Stage 1 and a Flex Alert asking residents to conserve power between 3 and 10 p.m. as a long-running, record-setting extreme heat wave continued to push California’s power grid to its limit.

Indeed, not only was smoke from the Mosquito Fire contributing to poor air quality in the Bay Area and Sacramento regions, but it also threatened to drift over solar farms, blocking their access to the sun and potentially reducing their energy output by about 1,000 megawatts, the state’s electric grid operator said.

The fire was also threatening several hydropower facilities in Placer County, potentially leading to a loss of another 200 megawatts, state energy officials said.

Meanwhile, Southern California Edison said Thursday evening that it was considering preemptively shutting off power in certain areas “due to weather conditions that may create the potential for elevated fire risk.”

San Diego County, for example, is today bracing to be hit by hot, dry winds as fast as 80 miles per hour as Tropical Storm Kay — which was downgraded from a hurricane late Thursday — spins closer. Heavy rains, flash floods and lightning are also expected.