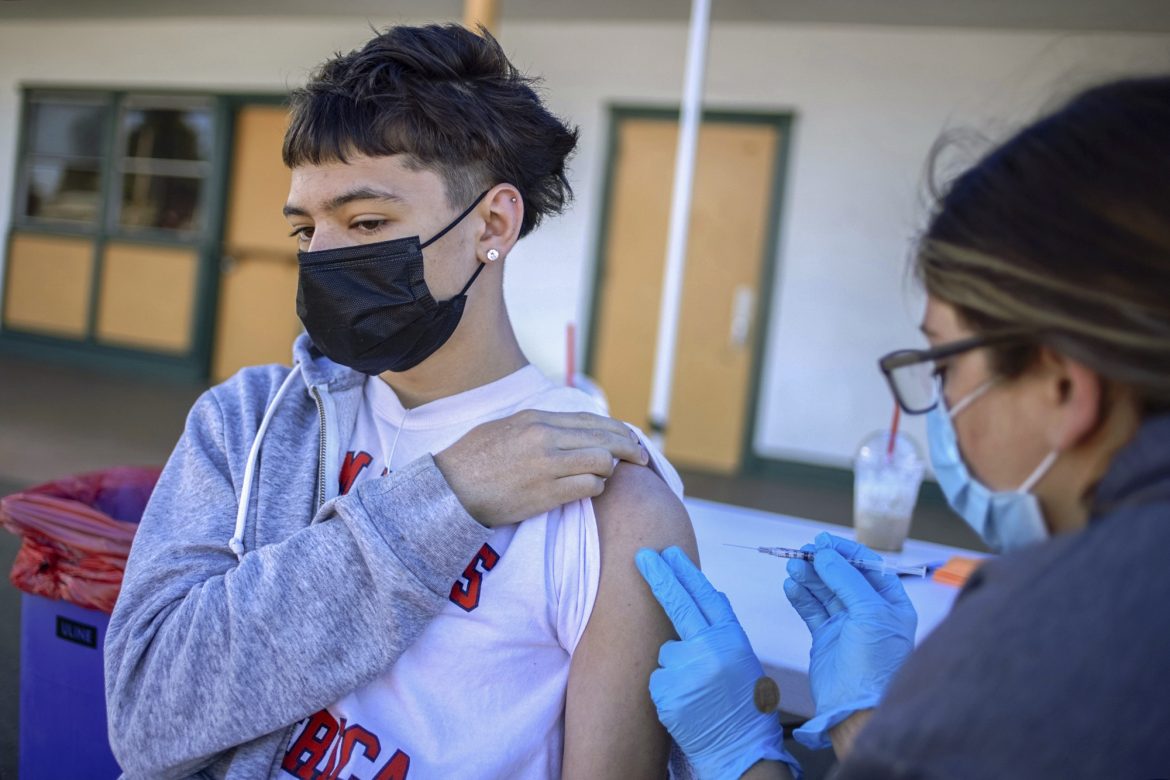 A highly contentious bill intended to allow some California teenagers to be vaccinated without parental consent has been shelved by the author, who said there were not enough votes to get it through on the final day of the legislative session.

San Francisco Democratic Sen. Scott Wiener’s bill, SB 866, was one of several bills that grew out of a legislative Vaccine Work Group created to focus on bills related to COVID-19 and vaccination. Of those eight bills, four died, three have been sent to Gov. Gavin Newsom and one is still in play in the Legislature.

Wiener’s legislation would have allowed teens 15 and older to get vaccinated, including against COVID-19, without parent permission. Originally, the bill aimed to include those as young as 12, but that was changed in the face of opposition.

On Wednesday morning, the last day of the legislative session, Wiener tweeted:

“While the votes are very close, we are several votes short of 41, and we don’t see a viable path for those final few votes.”

“Sadly, months of harassment and misinformation — including death threats against me and teen advocates — by a small but highly vocal and organized minority of anti-vaxxers have taken their toll,” he said in his statement. “The health of young people will suffer as a result. SB 866 did nothing more than empower young people to protect their own health, even if their parents have been brain-washed by anti-vax propaganda or are abusive or neglectful.”

In the end, Wiener didn’t have enough votes from other Democrats in the Democratic-majority Legislature. He and his staff spent the last week trying to muster enough support to put the bill to a vote. In earlier votes on the bill, more than a dozen Democrats voted no or chose not to vote.

Weiner told CalMatters he talked to many of his legislative colleagues and said they all had different reasons.

“There were some who were just philosophically opposed to it and others who were concerned about the politics and some who had a heartfelt opposition to the bill,” he said. “But there was also really intense, badgering harassment of the legislators.”

Democrats who opposed the bill said they were concerned about excluding parents from making medical decisions for their children.

Long Beach Democratic Assemblymember Pat O’Donnell said he considers himself a pro-vaxxer and supports vaccination requirements — but he called the bill an “overreach.”

“First, parents have the primary role in raising their children and participating in their medical decisions; the state should be very cautious when attempting to infringe upon that,” he said in a statement. “Further, we must ask ourselves if this bill is the beginning of a slippery slope…will more laws come forward to disallow parental involvement in making decisions about their minor children?”

It’s not unusual for Democrats to not be in agreement, especially over this kind of legislation, said Jim Newton, editor of Blueprint Magazine, a politics and policy publication at UCLA.

“On one hand, you can see the obvious public health implications but it’s always a little rough to say to parents that they’d allow children to do things that are against their wishes,” Newton said. “It doesn’t surprise me that there would be some Democrats that would break.”

Some lawmakers may have felt pressure from the opposition but others likely opposed it because of how they think about how children fit into families, Newton said.

But this isn’t a loss that can simply be chalked up to anti-vaxxers, harassment of the author or other legislators breaking ranks, Newton said.

“I suspect there is a more legitimate caucus who are concerned about this for families that is not under the spell of anti-vaxxers,” Newton said.

Not to say there aren’t anti-vaxxers or “cuckoos” out there who protested this bill and had an influence on the outcome, Newton said. But when it comes to children and families there are many issues that transcend party affiliation.

“We want children to be free of mistreatment by their parents but we recognize that children as a group don’t have the same experience and wisdom that older people do,” he said. “And we also recognize that they have a different level of capacity than adults. We generally trust their parents to look out for their best interest and when they don’t we want children to have an escape from that.”

Wiener points out that the state allows children 12 and up to decide about their sexual and reproductive health without parental consent. High schoolers, he argued, have the capacity to decide about vaccinations.

“Of course, we want kids to have a healthy relationship with their parents but the truth is a lot of kids can’t because they are afraid or their parents have been brainwashed against vaccines,” he said. “Right now, we are saying tough luck to these kids.”

Supporters of the legislation included teenagers who sought freedom to make up their own minds about vaccines, especially when their parents don’t support vaccinations or the COVID-19 vaccine in particular. Others said that more often their parents were too busy working or with other children to take them to a vaccine appointment.

Saanvi Arora, chief partnership officer with GENup, an advocacy group run by students that helped conceive the bill, said her biggest concern was the bill losing due to what she calls “anti-vaccine extremists.”

“We’re in a state like California where you would assume that pro-public health policies wouldn’t be that difficult to pass,” said Arora, 18. “Everything is getting so politicized.”

The state already allows minors, as young as 12, to get vaccinations against sexually transmitted diseases, and children of reproductive age can get birth control or an abortion without their parents’ consent. Otherwise, under state law, a child needs parental permission to be vaccinated.

Wiener said, “The anti-vaxxers may have prevailed in this particular fight, but the broader fight for science and health continues.”

Historically, bills related to vaccines have attracted opponents to the Capitol in droves. They have been loud, interrupted meetings, been removed from hearing rooms and, in one highly publicized 2019 instance, thrown blood from a menstrual cup onto the legislative floor during session.

Wiener said this session didn’t see that same level of aggressive or violent opposition in the Capitol but that the “pervasive atmosphere of harassment,” especially online, complicated the discussion.

“It created a very toxic political moment around a very reasonable bill,” he said.

Next week, Wiener will testify in the case against a San Ramon man facing eight felony counts who allegedly left death threats on Wiener’s website in January about the vaccine bill. Also, earlier this summer, Wiener received a bomb threat at his home because of his work on LGBTQ issues.

Parents and advocacy groups who opposed the teen vaccine bill argued that the proposal would infringe on parents’ right to make decisions for their children, but still hold them responsible if their child were to have a serious reaction or need medical care.

Parents who opposed the bill celebrated its defeat Wednesday but also took umbrage with Wiener’s description of them as anti-vax.

Laura Powell, a Contra Costa parent who opposed the legislation, tweeted: “#SB866 opponents are not a minority, and we are not anti-vaxxers, but it’s nice that he acknowledges that we succeeded in stopping a bad law, with nothing more than our voices.”

She said she is COVID-19 vaccinated and boosted but believes the state should not interfere with family medical decisions.

“This is part of a trend I see where it feels like the government is stepping into things that should be parental choice,” she said in an interview. “I got vaccinated myself. I don’t think my younger kids need to get (COVID) vaccinated. The other vaccines are already required for school, they have a long track record and the risks and benefits are known for those. I don’t spend a lot of time worried about those. We are less certain about the COVID vaccine.”

Denise Aguilar and Tara Thornton, founders of Freedom Angels, an organization focused on human and civil rights, were at the Capitol on Wednesday to oppose the bill.

“It was Democrats and Republicans both saying this bill went too far,” Aguilar said. “We need to support parental rights not just for California but for the whole nation.”

Aguilar and Thornton have spent months urging legislators to vote against the bill.

“It’s a sweeping forced medical emancipation of all children of California,” Thornton said. “It’s stepping between the sacred bond of parent-child relationship. We should never be alienating parents in a situation like that.”

Aguilar said it seems state legislators contradict themselves by supporting bills like this that would give teens power over medical decisions while also arguing in favor of other legislation to protect teens and youth. She points to bills that would keep teens and youth from certain interrogations during criminal investigations or to protect them from marketing from gun and tobacco companies because their brains are still developing and they are not mature enough to make those decisions.

Thornton called it a “double standard.”

John Rogers, professor of education at UCLA, said the arguments against the bill were especially strident and representative of an especially contentious time in America. He said he has seen growing rhetoric around the issue of parental rights since the pandemic began, especially when it comes to schools, children, masking and the vaccine.

But this issue is especially complicated given there are reasonable arguments on both sides, he said.

“It’s a complex question of how you move forward in a way that acknowledges the voice and agency of young people, meanwhile being attentive to the broader medical needs, the knowledge that parents have, the general disposition of the state to defer to parents on medical issues,” he said.