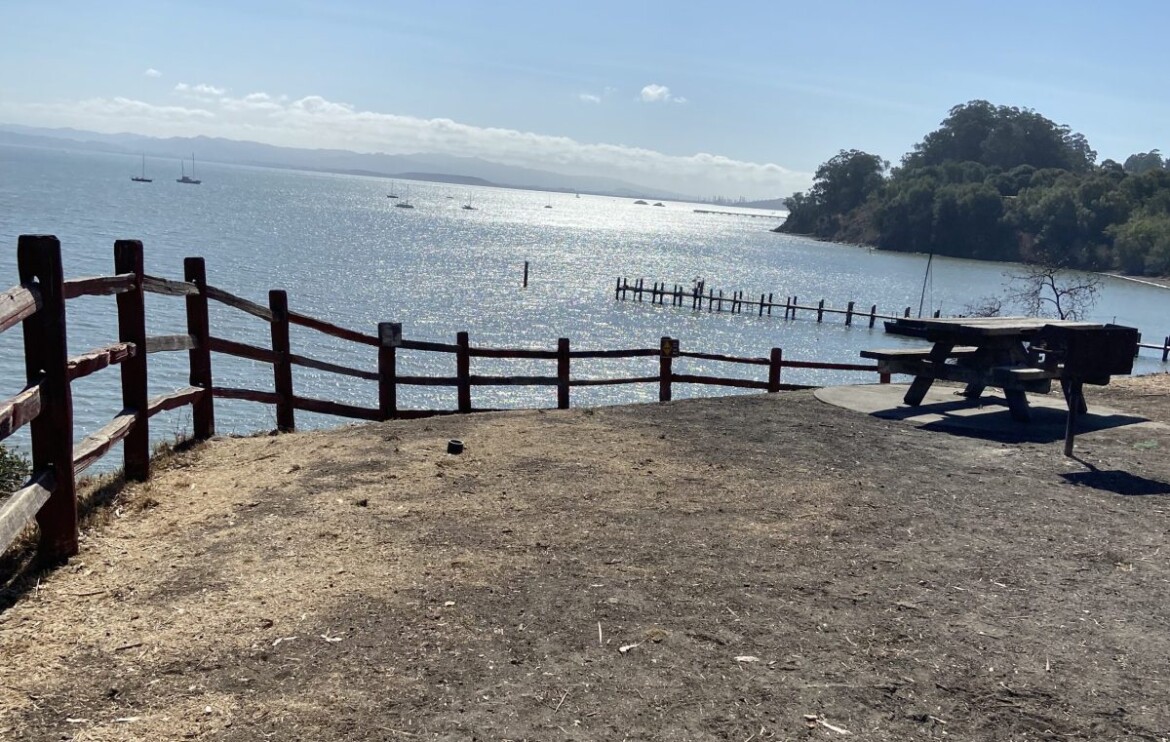 China Camp State Park in Marin County has always been one of those places I meant to get to. But it’s just far enough away that I never quite got around to it.

Now that I’ve been, I’m a fan, the kind who urges people to go to this out-of-the way location and enjoy the stunning views of San Pablo Bay and reminders of the region’s history.

We were greeted at the park entrance by a friendly woman volunteer. Since 2012, the volunteer told us, this state park near San Rafael has been run by the nonprofit Friends of China Camp organization, which stepped in when state budget cuts were threatening the park’s future. The popular park has more than 30 camping sites.

A sign at the park explained, “This park receives NO funding from the State. China Camp is sustained by trail and parking fees, camping fees and memberships in FOCC.” We paid our fees ($6) without protest.

We were given directions and a map, then headed for some easy hiking, before visiting the main focus of the park, the dock and buildings from the its days as a Chinese fishing village.

We talked about the birds as we hiked the three-quarter mile Turtle Back Trail along the bay, debating whether we were seeing egrets or herons, turkey or quail. We hiked on a wide, flat accessible trail and exchanged greetings with an elderly man in a wheelchair and his entourage. The trail is surrounded by oak and manzanita trees.

As we got closer to the water, we saw a salt marsh, a rare sight in the Bay Area. The marshlands were a colorful carpet of green and orange. The park has more than 100 acres of tidal marshes.

Many signs along the trail explained what we were seeing. At one time, marshes were seen as wastelands, but today they’re considered a resource and a living laboratory for scientists, who use this area to figure out how to restore other marshes in the Bay Area. China Camp is one of two reserves that are part of San Francisco Bay National Estuarine Research Reserve (the other is Suisun Marsh in Solano County).

We drove the short distance to the main fishing village, noting the bike racks on cars and the mountain bikers who were pedaling through the park. We could have walked to the village on the Shoreline Trail, or if we had wanted some elevation gain, we could have taken the Bay View or Oak Ridge trails. The park has 15 miles of hiking, equestrian and cycling trails.

We parked at China Camp Point before heading into the village, near the picnic tables and barbecue pits that were starting to be claimed by day-trippers. The spectacular view was of brown wooden fences and sailboats bobbing in the nearby bay.

We headed to the dock at China Camp, which was uncrowded on a Saturday morning. A family was building sandcastles on the beach. Two paddleboarders, with a dog on board, floated by.

My wife walked toward a floating reproduction of a Chinese junk boat, while I was the sole visitor to the museum about the Chinese fishing village. It’s a fascinating collection, one that traces the story of the shrimping village that sprung up in the early 1880s. At one time, 469 people lived here. Frank Quan, the last of the descendants of those families, lived at China Camp for 90 years until he died in 2016.

Many of the old buildings from China Camp’s heyday are still preserved, including a hillside cabin which provides a glimpse back to life there from 140 years ago.

The lunch counter features a poster of China Camp’s Hollywood moment, when it served as the setting for the 1955 film “Blood Alley,” starring John Wayne and Lauren Bacall. The film received lukewarm reviews. China Camp was a stand-in for what the film’s poster says was Chiku Shan, China.

The lunch counter is also a place to buy souvenirs to support the park. One item of note is a clever $25 T-shirt that captures China Camp’s many roles, showing a fire-breathing dragon holding a marshmallow on a skewer.

China Camp is located in San Rafael, with a main entrance located three miles from the North San Pedro Road/Marin Civic Center exit for Highway 101. Fees are charged for day use and parking.