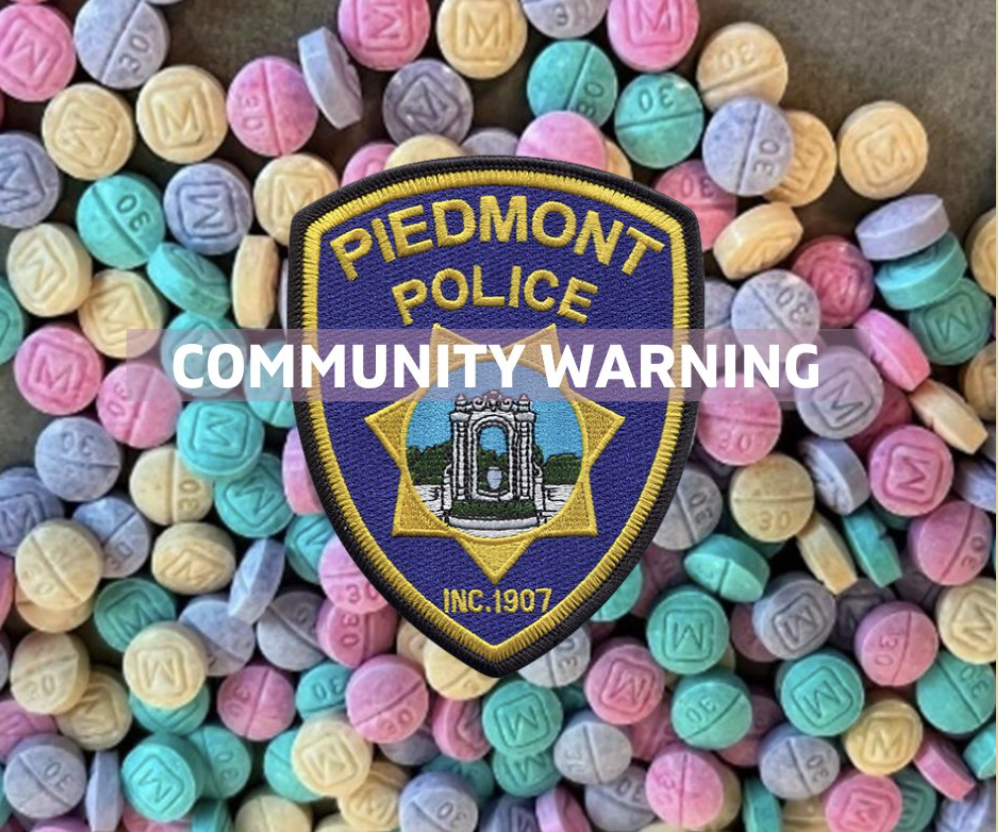 Piedmont schools Interim Superintendent Dr. Donald Evans and Piedmont police warned the community Thursday about the emergence of deceptively presented fentanyl in brightly colored pills and powders. In an email to the school community Thursday evening, Evans said that the illegal street drug, “Rainbow Fentanyl,” can resemble candy and be attractive to young people.

The United States Drug Enforcement Agency (DEA) indicates that Fentanyl is a synthetic opioid that is 50x more potent than heroin and 100x more potent than morphine. Just two milligrams of fentanyl – equal to just 10-15 grains of table salt, is considered a lethal dose. Without laboratory testing, there is no way to know how much fentanyl may be concentrated in a pill or powder. Furthermore, the DEA warns that rainbow fentanyl has been identified as a new trend, and according to DEA Administrator Anne Milgram, “is a deliberate effort by drug traffickers to drive addiction amongst kids and young adults.” This fentanyl can be found in many forms, including pills, powder, and blocks that can resemble sidewalk chalk or candy. It has also been identified in gummy form. Any pill (regardless of its color, shape, or size) that does not come from a health care provider or pharmacist can contain fentanyl and can be deadly.

Piedmont police also posted a warning about the drug on social media.

Fentanyl is highly addictive and can be deadly in small amounts. We encourage everyone to have conversations with their children, especially teens, regarding the extreme dangers of overdose with this drug. Anyone who encounters fentanyl in any form should not handle it and should call 911 immediately.

Evans and Piedmont police linked to a public health guidance about signs of fentanyl intoxication and overdose.

“The CDPH has provided signs to look for regarding suspected or confirmed fentanyl or other opioid use and possible overdose, as well as resources included in its Overdose Prevention Initiative,” Evans wrote.

Piedmont police officers carry Naloxone, a life-saving medication used to reverse an opioid overdose. Recognizing the signs of opioid overdose can save a life. Here are some things to look for:

– Slow, weak, or no breathing

It may be hard to tell if a person is experiencing an overdose. If you aren’t sure, treat it like an overdose and call 911 immediately.

State officials recently created a bipartisan committee that will combine strategies from public health and law enforcement to address the ongoing problem of fentanyl and other opioid addiction. The hope is to develop policies and a statewide strategy to prevent fatal overdoses, said committee member Rep. Matt Haney, D-San Francisco.

Last year more than 6,000 Californians died from opioid overdoses, and the numbers this year will likely be similar, according to state public health data.

Keith Humphreys, Stanford psychiatry professor and former senior drug policy advisor for President Barack Obama, said that as fentanyl has moved its way from the eastern states to the West Coast, it’s coming with an “unprecedented debt” — more Californians are dying of overdose now than ever before.

“We will lose more lives to COVID-19 this year in the United States, but we will lose more years of life to drug overdoses, because the people who die are so much younger,” said Humphreys.

It’s also not just about fatal overdoses, he said, because behind every person who overdoses are dozens more living with addiction.

Dr. Lee Trope, a pediatrician who works with youth addicted to opioids at Santa Clara Valley Medical Center, said few pediatric providers are trained to care for opioid and fentanyl addiction despite its growing accessibility for teens. She often hears of youth buying what they think is Percocet, a less dangerous opioid, via apps like Snapchat, only for it to be pure fentanyl. The youngest patient addicted to fentanyl she has treated was just 12 years old.

“I’ve learned from these kids that it’s usually harder to get help than to just keep using. We need to change that,” Trope said.