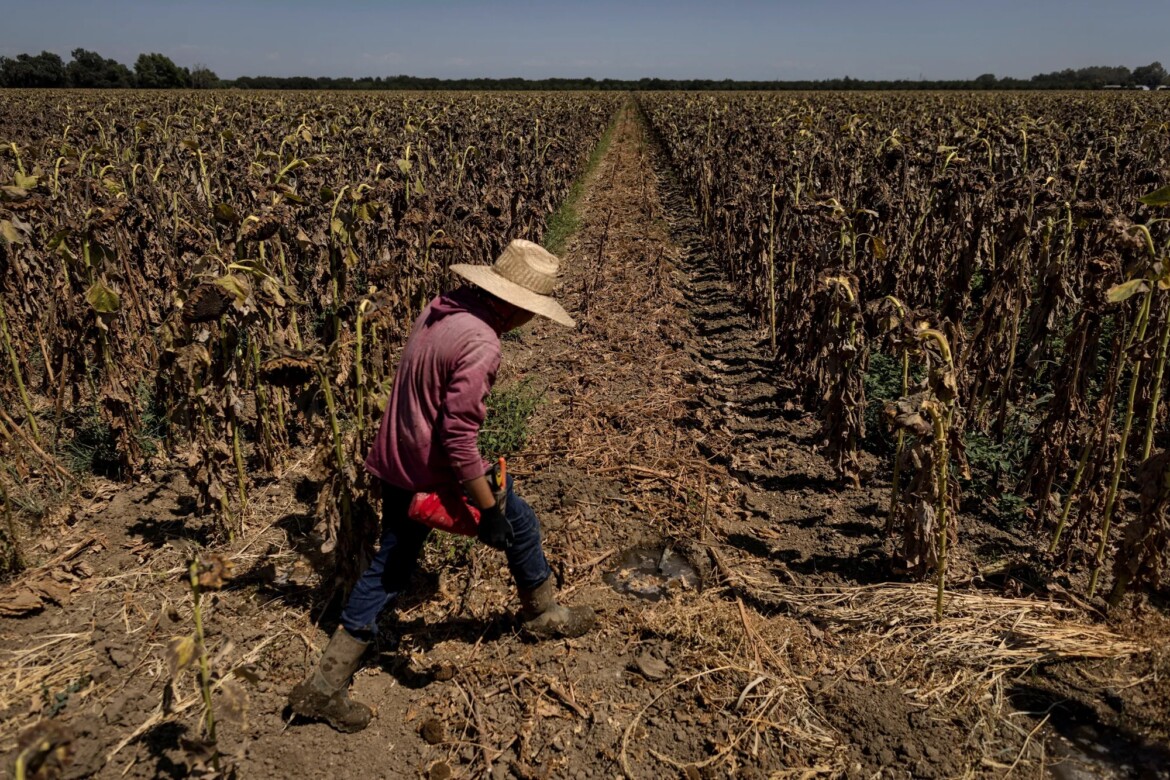 A worker walks along a dried-up field of sunflowers near Sacramento on August 18, 2022. Photo by Carlos Barria, REUTERS

California lawmakers punted on a proposal to rein in agricultural groundwater pumping as drought continues to grip California and more than a thousand domestic wells have run dry.

A bill by Assemblymember Steve Bennett, a Democrat from Santa Barbara, would have added hurdles to obtain a permit to drill an agricultural well. Though the bill cleared the Senate on Monday, Bennett elected to not bring it up for a final vote in the Assembly before the Legislative session timed out Wednesday night. He said California Gov. Gavin Newsom’s office told him the bill was no longer viable because of changes made.

During one of the driest years in recent history, California legislators did not pass any new laws that would boost the water supply or protect groundwater from overpumping, although funds were included in the budget for groundwater management and programs like water recycling.

The bill would have been the biggest change to California’s groundwater management since the state’s landmark Sustainable Groundwater Management Act was enacted in 2014, during the height of the last drought, said Roger Dickinson, a former Democratic assemblymember from Sacramento and one of the authors.

Over the past five years — well after passage of the act — more than 6,750 new irrigation wells have been drilled.

“We cannot succeed in reaching sustainability unless we are judicious about continuing to allow well drilling,” said Dickinson, now policy director for CivicWell, a nonprofit group promoting sustainable local policies.

If Bennett’s proposal had been approved, local groundwater management agencies, largely in the Central Valley, would have been required to weigh in on whether a new, enlarged or reactivated well would harm the local aquifer before a local government can grant a permit. The applicant also would have had to submit a study by an engineer or geologist confirming that the well is unlikely to interfere with nearby wells.

The bill is aimed at agricultural wells. Household wells pumping less than two acre-feet a year and public water system wells are excluded.

The bill received little public discussion on the Senate floor before passing on Monday. But it underwent a heated discussion in the Assembly months before, with members from the Central Valley speaking in opposition.

“Continuing to go forward with this kind of heavy-handed approach is simply bringing the day closer when those million acres of agriculture are fallowed, and literally thousands upon thousands of farm workers will be unemployed,” Assemblymember Jim Patterson, a Republican from Fresno, said in May. “The death knell of agriculture is but a few more votes like this away.”

Assemblymember Adam Gray, a Democrat from Merced, said the bill would have “turned the process upside down and imposed a sweeping proclamation from Sacramento with zero consideration for local conditions.”

“Once again we saw a bill written and advocated for by people who aren’t from the Valley who think know what’s best for us,” he said in a statement Thursday.

Business and agricultural groups, including the California Chamber of Commerce and the California Farm Bureau Federation, opposed the bill, saying it would interfere with landowners’ rights to use groundwater and spur lawsuits over permitting decisions.

He said it could interfere with “what we’re trying to accomplish with our groundwater over the next number of years” and that it failed to address the diversity of California’s groundwater basins.

“Some (basins) are in critical overdraft, some are being managed sustainably already. This bill created a uniform envelope over all of them,” he said.

Bennett said agriculture and business groups had rallied hard against the bill. But he attributed its ultimate death to amendments inserted by the Senate appropriations committee that weakened its provisions compared to an executive order that Newsom issued earlier this year.

The amendments cut a requirement for permit applicants to show their wells would not increase land subsidence. Appropriations chair Anthony Portantino, a Democratic state senator from Glendale, did not respond to a request for comment.

Newsom’s order — issued after a record-dry start to the year — temporarily bars local governments from issuing permits for wells deemed potentially harmful to nearby wells or that could cause subsidence that damages structures.

“If that wouldn’t have happened, if we would have kept it as strong as the executive order, I’m confident the bill would be sitting on the governor’s desk and he would be signing it,” Bennett said. “But instead, we have to start all over again next year.”

Alex Stack, a spokesperson for Newsom, did not answer a question about what the governor’s office told Bennett about the bill.

“The (executive order) is important for conservation and sustainability purposes during this period of extreme and extended drought, and we will work with the Legislature and state agencies on any changes in law that might be helpful to putting the state on a path to navigating our hotter, drier future,” Stack said.

More than 97% of the state is experiencing severe drought, and nearly 1,040 wells have run dry so far this year.

Local groundwater agencies in critically overdrafted basins, mostly in the San Joaquin Valley, the Central Coast and desert regions, are required to dial back the depletion and stop the consequences from worsening by 2040. Those in less depleted basins have until 2042.

But groundwater levels are still declining, land subsidence continues and more wells were drilled in the 2021 water year than in any of the previous five years, a state report said.

Bennett’s bill aimed to address a major groundwater disconnect between the local governments that grant drilling permits, and the local groundwater agencies tasked with managing aquifers. According to a bill analysis by an Assembly consultant, granting a well permit is often considered a “ministerial action” with “little or no personal judgment by the public official as to the wisdom or manner of carrying out the project.”

Dickinson said he had hoped when drafting the 2014 law that groundwater agencies and local governments would coordinate. “What we still see is both a failure because of, to a certain extent, the natural inertia of government on the one hand, and the grudging implementation of (the Act), on the other hand,” Dickinson said.

Bennett said he expects a run on permit applications if Newsom’s executive order expires before a bill is in place.

“I’m really disappointed. And I’m very concerned that if something happens to the executive order, we will have a land rush on well permits,” he said. “But I’m not discouraged. We learned and we’re going to redouble our efforts.”